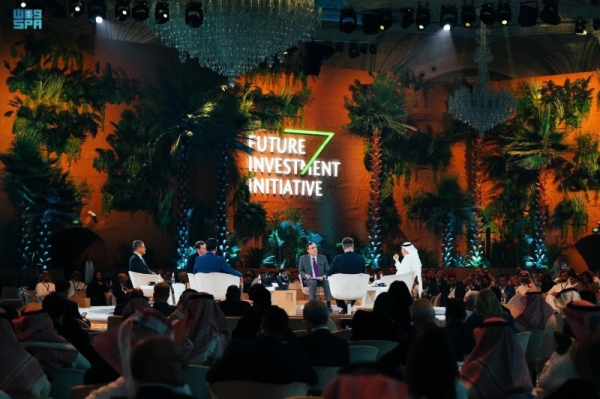 Taking part in the first day of the Future Investment Initiative (FII) conference here on Tuesday, senior officials of the Public Investment Fund (PIF) revealed its future plans to boost the national economy and achieve Saudi Arabia’s goals in renewable energy, including green hydrogen production.
The first day of the conference witnessed a huge presence of ministers, officials, CEOs and leaders from major international companies, to discuss the most prominent challenges and issues facing the international economy.

In a session titled: “The sovereign wealth rebuilds the world again,” Rania Nashar, head of the Compliance and Governance Divisions at PIF, stated that PIF is distinguished by a unique vision as it directs its investments towards promising sectors.”

For his part, Jerry Todd, director of the National Development Division at PIF, said that the subsidiaries of the PIF’s portfolio are the basis of its influential role, saying: “we look forward to their pivotal role in strengthening our national economy, and finding resources that allow them to implement long-term investments and develop private local supply chains and investment in our national cadres.”

On his part, Muhammad Al-Bolaihed, director of the utilities and renewable energy sector at PIF, stressed that priorities are focused on making the Kingdom a global center for green hydrogen production through pumping investments in production lines, infrastructure and technologies needed by this industry through signing local and global strategic partnerships.

Addressing one of the sessions of the conference, Dr. Badr Al-Bader, CEO of the Mohammed bin Salman Foundation (Misk), stated that the coronavirus pandemic led to redefining of many global priorities and systems in general.

Dr. Al-Bader noted that Misk carried out a study on leadership after the pandemic, and it showed that “there is a leadership model that defines the characteristics of future leaders through seven competencies; the most important of which is to be a key leader focusing on human well-being.”

He highlighted the importance of dialogue to create generations and open up broader horizons in order to develop ideas and methods towards achieving the common goal, which is the transformational vision by choosing between the old and modern schools of leadership. “Each age group has its own characteristics, perspective and methods, and there are constant values. These are respect, appreciation, reflection, learning and good financial security planning,” he added.
#Coronavirus