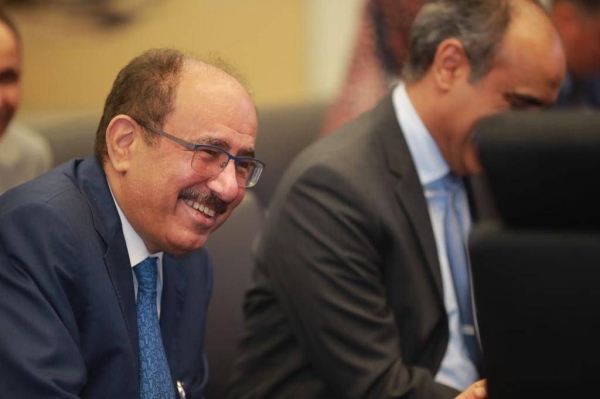 The phrase “past is prologue for the present and the present is a precursor for the future” aptly fits author Ibrahim Almuhanna’s authoritative book Oil Leaders, which takes its readers through a Byzantine world of the priceless commodity, whose main vexing issue was and is pricing.
History has always provided the context for the present, and it is this prior knowledge of the past happenings that will help all determine appropriate courses of action for the present and a possible direction for future.

Ibrahim Almuhanna has done just that by providing an insider’s account of four decades of Saudi Arabia and OPEC's global energy policy in his interesting and eminently readable book — Oil Leaders.

Almuhanna — a close adviser to different Saudi petroleum ministers during that period ― has stressed that individual decisions can have an impactful reach not only on the market, but also on the world. The human foibles, lack of clear data, improper communications and opaque political decisions could make or break the market and thus contribute in shaping world movements.

Almuhanna held higher positions in the Ministry of Oil and Mineral Resources during the period from 1989 to 2017, and the book represents the memoirs of its author during his work with the ministry. It is also considered as an excellent study of Saudi oil policy and the history of OPEC since 1980s.

"Oil Leaders" offers an extraordinary peep into the strategic thinking of top figures in the energy world from the 1980s through the recent past. The author has used personal traits of the leaders to connect the dots during the period by highlighting milestones that shifted courses of the markets and also changed the direction of the world. As the book evolves, Almuhanna’s narration takes context from the past to build for the future.

The book rightly espouses the critical work Minister of Energy Prince Abdulaziz bin Salman faces as the global energy market goes through its own catharsis. Constantly balancing the supply-demand equation with the setting of equitable prices, the minister needs to develop an energy policy for Saudi Arabia, such that it serves its long- and short-term needs.

The minster has factored in the supply-demand, global institutionalized relationships, the linkups between energy, health and economy sectors, clean energy and climate change concerns — leading efforts in carbon capture and promoting the Circular Carbon Economy approach and focusing on the domestic agenda on oil and its derivatives in his way forward.

In addition, an important objective for the energy minister is to integrate the various components of the energy sector, with more renewables in its energy mix. Saudi Arabia’s goal by 2030 is to generate 50% of its power from renewable sources, and also to bring about a synergy between energy and economy in different regions of the Kingdom.

Almuhanna’s memoirs generally revolve around six oil crises, especially the 1990 crisis when Saddam Hussein invaded and occupied Kuwait, which raised great fears of the possibility of a serious shortage of global oil supplies. Saudi Arabia took the initiative to increase its oil production, thus averting an oil crisis. This is the same case with the crisis of 2008 when oil consumption increased, leading to a significant increase in the price of the vital strategic commodity. The other four crises occurred in the years of 1985, 1997, 2014, and 2020.

Those crises were caused by the fall in oil prices, and not their rise. The most important points that the reader can make out of Almuhanna’s book is that it is good for everyone that oil prices are balanced, and it is possible to predict their movement up and down.

Almuhanna believes that the real problem lies in “fragility” that the prices are high and not low. The author refers to two incidents during which the major oil consumers tried to curb the price rise.

In 2008, the British government proposed that the price of oil not to exceed $60 to $90 per barrel, but the proposal quickly collapsed. Prices continued to remain above $90 a barrel for a short term, before falling later to below $60 a barrel.

In 2020, there was a collapse in oil demand, following the outbreak of the coronavirus pandemic that led to a decline in oil prices to the extent that some American oil companies were threatened with bankruptcy. This forced US President Donald Trump to intervene, and subsequently his administration, in contrast to the usual American role, persuaded the OPEC to reduce its production with the aim of boosting oil prices.

Although a rise in oil prices serves the interests of Saudi Arabia directly, Almuhanna insists that Saudi Arabia often takes its decisions in this regard with a long-term viewpoint, as it realizes that the rise in the price of oil above a certain level harms the global economy and the economic conditions of trading partners. The author informs us that the Kingdom sometimes has political incentives that can be achieved by reducing the prices.

Almuhanna’s book throughout analyzes how individuals, powerful or in powerful positions, made crucial choices, and then expounded on the immediate fallout of the decisions. The book tracks how people and nations responded to the flow of information on pivotal market and political events, and reveals the reactions from allies and adversaries that at times caused seismic shifts in the world.

Almuhanna’s book provides an unexpectedly candid glimpse of the oil market in his 30 years of service as an adviser to the Saudi Ministry of Petroleum (now Ministry of Energy), and working with pivotal players. Thoughtful and perceptive, he takes the readers through a labyrinth of deft moves that display the background to what looked like market fundamentals at that time.

His human narration that has eclipsed some of the erroneous attributes that linked to the events of the time is simple and succinct and it succeeds in providing a humane face to the efforts made by Saudi Arabia to steer the oil markets from turbulence to stability.

The early period of Yamani, Nazer and Al-Naimi produced drama as well as direction. Then came the period of growth under the next energy ministers.

The author spoke at length about Hisham Nazer and Al-Naimi because he worked with them, while his talks about Yamani were based on his interviews with the officials who served the ministry during Yamani’s tenure.

Almuhanna makes his judgment about each one of the three ministers and this is not without criticism.

The author describes Yamani as a meticulous man, but says he has had no real training in economic affairs and that he was totally dependent on a narrow circle of those whom he trusted. In contrast to what Jeffrey Robinson wrote in his translation of Yamani, which was published in 1988, under the title “Yamani...The story from inside”, Yamani downplayed oil production by non-OPEC countries, including regions like the North Sea. He was apparently confident that the oil market would turn completely toward the direction that he aspired to. Therefore, Yamani deliberately reduced a large amount of oil production during the period from the beginning to the middle of the 1980s and suddenly decided during 1985-1986 to increase production, which led to the collapse of oil prices.

Hisham Nazer succeeded Yamani as minister of petroleum and mineral resources. Nazer brought about inevitable changes in the ministry but Almuhanna indicates in particular that he focused on bringing new talents to the ministry’s staff. Almuhanna believes Nazer should have instead focused on bringing about more comprehensive administrative reforms.

Al-Naimi became the minister, succeeding Hisham Nazer. He made his way up beginning his career ladder in Saudi Aramco, before its nationalization. Al-Naimi remained at the helm of the ministry for more than two decades.

Almuhanna, in his book, explains that despite the many virtues of Al-Naimi as a minister, he was sometimes stubborn and inflexible: he refused to change his oil policy after the US shale production caused a glut in the oil markets, which led to a drop in prices during 2014-2016. Al-Naimi was replaced by Khalid Al-Falih, and the ministry was renamed the Ministry of Energy.

Almuhanna believes that Saudi Arabia is an important country in OPEC. He concluded that Saudi Arabia has been bearing alone for a long time the burdens of the production cuts decided by OPEC and that it needs to regain its market share. Minister Al-Naimi also refused to impose restrictions on Saudi oil production during 1997-1998.

Almuhanna points out that the oil glut that occurred during 2014-2016 posed a major challenge because the US shale production added large quantities to the oil supply. Saudi oil policy makers concluded that OPEC could no longer alone control the oil market and it was necessary for them to communicate with producers outside the organization, especially Russia, and it was not easy at first.

Almuhanna’s book provides a clear picture of the dynamics of work at OPEC, and he believes that the problem of OPEC is that there is no authority capable of obligating its member states to the decisions that are agreed upon and it is a real problem when it comes to times of overproduction.

In this case, the organization must persuade its member states to reduce their production and give up some of their oil revenues. Almuhanna mentions cases where prominent OPEC members disdained the organization’s decision regarding determining the production quotas for each country, and declared their intention to produce the largest amounts that the market could bear.

Almuhanna highlights how the media has played an increasingly important role as a conduit of information among multiple players in the oil market. He draws on personal familiarity to reveal behind-the-scenes perspective on pivotal oil market events and dynamics.

The author’s personalized effort keeps the readers engrossed as he highlights the piques and tantrums of officials and ministers, their personal tiffs with their counterparts and the underlying politics which seemingly weaves a web of deceit that adds to the already impossible situation at hand.

Almuhanna’s book, published by the Global Energy Policy Series, and printed at Columbia University Press, is titled: “OIL LEADERS: An Insider’s Account of Four Decades of Saudi Arabia and OPEC’s Global Energy Policy.” It is replete with vast and authentic information for oil experts seeking to delve deep into the Saudi oil policy.

This book is a must-read for practitioners and policy makers engaged with the global energy world and also for people entering the world of international relations, where diplomacy and politics go hand in hand.
#Donald Trump  #Coronavirus