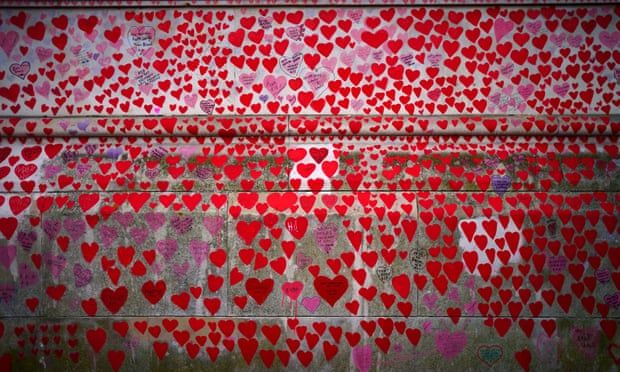 Figures show deaths per capita are above European average, at 2,689 per million people

More than 200,000 Covid deaths have been recorded across the UK, according to figures from the Office for National Statistics.

There have been a total of 200,247 Covid deaths, including 294 in the last week. The figures cover deaths due to Covid-19 as well as those involving the virus.

More than 100,000 deaths were registered in the UK by early January 2021, less than a year into the pandemic. It has taken more than a year and a half for the death toll to double, with vaccination uptake, better understanding of how to treat the virus and social distancing measures all contributing to fewer deaths.

However, the milestone is a reminder of the continued toll of Covid-19, with almost a quarter of the fatalities occurring in the past year.

“At the moment there’s a narrative of ‘we got the big calls right on Covid’ and I just don’t think you can look at those numbers and say that,” said Prof Christina Pagel, the director of University College London’s clinical operational research unit. “More than 150,000 deaths were in the first two waves and many countries around the world are nowhere near that figure because they took different actions early in the pandemic.

“Also 50,000 of those deaths have happened since last summer. There was a time when the suggestion of 50,000 deaths a year seemed outrageous, yet we seem to have just accepted that this is the way it is, when it’s much higher than the death toll from an annual flu season.”

The UK has the highest death toll in Europe in absolute terms, according to Our World in Data, and a death rate of 2,689 per million people. This rate is lower thaat in Hungary, Italy or Poland but higher than the rates of Spain (2,295 per million), France (2,230) and Germany (1,704), according to figures from Our World In Data up to 12 July. 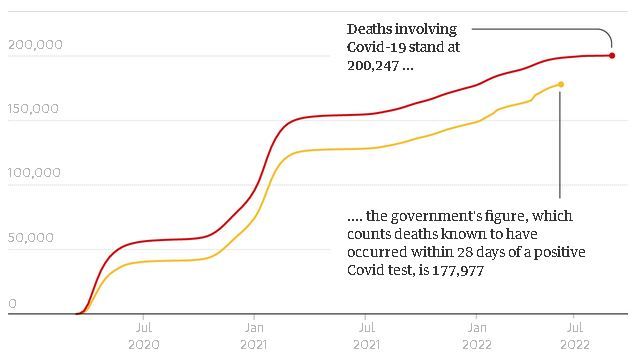 The UK’s excess mortality rate is also higher than other European averages, running at 2,098 per million people, almost twice that of Germany’s (1,117), according to Our World in Data.

Experts say the figures, though likely to be an undercount, reflect the impact of political decisions taken early in the pandemic. “Many people died from Covid in March and April 2020 where it was not recorded on the death certificate – probably in excess of 10,000. This underreporting was largely due to deaths in care homes when GPs were unable to get tests to confirm Covid,” said Paul Hunter, a professor in medicine at the University of East Anglia.

“Many of the deaths in early 2020 could have been prevented by a more timely response in the UK and by not discharging large numbers of infectious people to care homes.”

The proportion of cases where Covid was a primary cause of death compared with those where death certificates mentioned the virus, either as the main cause or a contributory factor, has fallen over the course of the pandemic.

Analysis of registration figures for England and Wales for the pandemic to date shows that in the first wave, 91% of people died directly as a result of Covid. 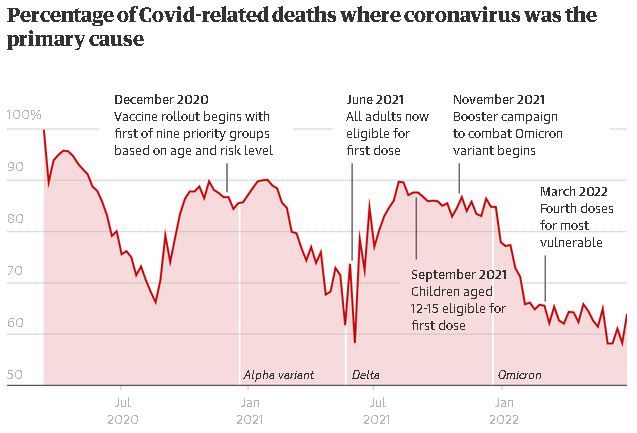 Since Omicron became the dominant variant the figure has fallen to 68% of Covid deaths, and in recent weeks it has been 60%, as a result of the reduced severity of the strain and the success of the vaccine rollout.

However, experts are calling for a focus on longer-term solutions as new variants emerge, potentially threatening the effectiveness of existing vaccines.

“We can’t think about temporary restrictions. It’s not putting curfews on things or restricting who we can see. There have to be things that we can do sustainably – not just tomorrow but this year and next year,” Pagel said.

“The biggest thing is tackling the fact that it’s airborne by having clean indoor air and improving ventilation and air filtration. That means investing in new technologies, like far ultraviolet C (UVC) light, which could be a complete gamechanger. It doesn’t affect anyone’s freedom, it just makes it a bit safer.

“The government should make tests free again … Then we need to improve our sick pay. We have one of the lowest rates of sick pay in Europe. People can’t afford to stay home if they are ill and so they’re going to work.”