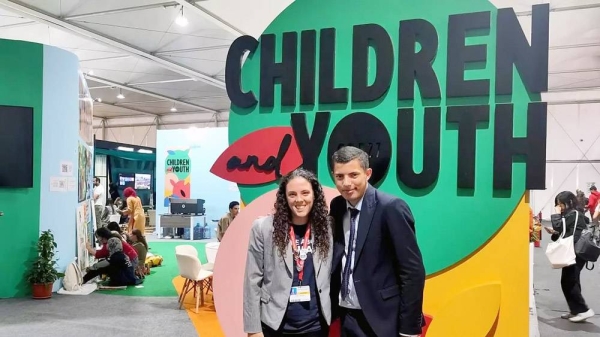 Looking for hope at COP27? The Children and Youth Pavilion is leading the way

In the maze of COP27, people have been flocking to one pavilion in particular: the space dedicated to children and youth.
If you’re looking for a bit of light from the summit, the hive of activity from young people is an unusually bright spot.

But it’s not just on the ground at the UN climate conference that the youth have staked a claim for the first time.

On Friday night, YOUNGO — the official youth constituency of the UNFCCC — celebrated securing official recognition as stakeholders in designing and implementing climate policies.

“We all cheered and cried at the end, which resulted in this beautiful photo together,” says Hayleigh Campbell, YOUNGO’s ACE ‘working group’ co-lead.

The recognition comes under an obscure article of the Paris Agreement. Action for Climate Empowerment (ACE) refers to the work of article 12 under which countries must empower people to be part of the solution to the climate crisis.

It often goes unreported on, says Hayleigh. It’s also overlooked by the heads of delegations — the group of politicians, negotiators and other actors representing countries at COP27.

“Which is so sad, because I personally believe it’s the key to unlocking the just transition that we are all advocating for as young people.”

The action plan agreed in Sharm El Sheikh is one that the young people in YOUNGO have “fought relentlessly” to be officially recognized within and shape over the next four years.

So how will their status as stakeholders change things?

“In the international space, anything that’s written down, set in stone, and agreed to by parties that you can present, gives you the power to have influence.

“It acknowledges power,” said Hayleigh, likening it to the first requirement for written evidence if you plan to sue someone.

“This is the evidence we need to take to our governments to say we would like to be included in national delegations.”

Climate justice is the loudest topic at COP27. It comes in the calls for loss and damage funding for the devastation in developing countries that have done the least to cause the climate crisis.

Intergenerational justice cuts across all borders, but it’s particularly pressing in Africa, which has the youngest population in the world — around 70 percent of people under 30.

“Every effort we are making right now will inevitably translate into what’s to come,” Mohab said, “We are trying to have a higher moral compass than the decision makers, obviously.”

YOUNGO is only one mouthpiece for young people at COP.

A new Climate Youth Negotiator Program (CYNP) has brought 55 teens and young adults into the negotiating rooms at COP27, providing crucial grants to young negotiators from the Global South.

“A much-needed injection of young voices can be doubly as powerful if it is buttressed by the deep understanding that ultimately we are all interconnected, that this is not about who wins and who loses, but rather how we build a future where everyone wins,” said former UNFCCC Executive Secretary Christina Figueres.

“My long history in the climate space confirms that it is precisely young people who can change the hearts and minds of so many oldies who are still resisting.”

The Loss and Damage Youth Coalition (LDYC) has also been leading the calls for just financing at the core of this COP. Their key demands include establishing a facility, which provides new, additional and accessible funding.

They want to see the Santiago Network on Loss and Damage fully activated to help deliver this.

The organizers of the popular Children and Youth Pavilion hope it will have a lasting future impact too, creating a legacy of meaningful representation at future COPs.

Pavilions are the shop fronts of every country, giving them a chance to exhibit their greenest initiatives, discuss the impacts of climate change, and host panels.

There’s a variety of NGOs, civil society groups and even companies as well — a sprawling atlas where social media giant Meta rubs shoulders with Botswana.

A number of different organizations pulled together $500,000 (€482,000) to secure the youth pavilion, but Hayleigh believes it's worth every penny and more.

“What has brought young people to this space is not necessarily social media, it’s other young people sharing the word of this space that they feel comfortable in, connecting in, being their true selves, advocating for action and meeting others in,” she said.

Previous COPs have seen young people huddling together on the floor or whatever space they can find.

In Sharm El-Sheikh, they’ve had visits from CO26 and 27 presidents Alok Sharma and Sameh Shoukry.

“We’re always reaching out to parties first to have our voices heard and rarely do they reach out to us,” said Hayleigh.

“Politicians coming to this space taking photos — not necessarily taking the time to ask what's going on — are an example of what happens in negotiations when you come to COP,” she says.

But she’s happy to see them there. Especially if their photos get out into the world and help solidify the pavilion as a “cornerstone” of all future COPs.

“Do I wish that it might lead to a little bit more? Yes. But I think in the first year of having this pavilion — it's exciting. It's a stepping stone.”

Hayleigh and Mohab’s optimism is a tonic in the wider context of the summit, where change comes increment by grueling increment. But if you’re looking for one undeniable reason for hope at the moment it’s this:

“We’ll be the ones who are voted into these positions or appointed as we are now also every day getting older,” said Hayleigh.

“And when we have that chance to truly get control, I think the world’s going to see a massive change towards the just future that puts culture, land, and community over profit.”