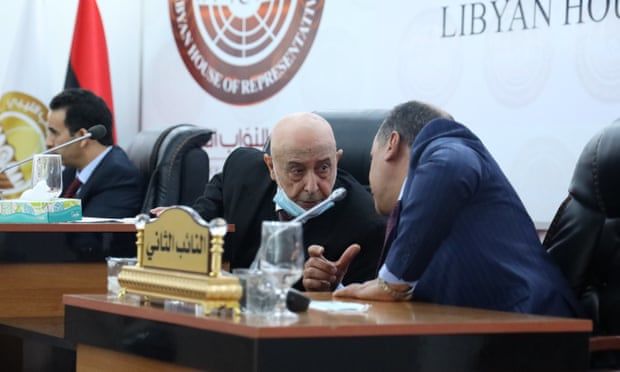 Special envoys from the US, France, Germany, Italy and the UK are due to meet in Washington on 13 January to discuss their next steps after two rival Libyan factions last week failed to reach a final agreement in Cairo on the constitutional basis for national elections.

The presidential and parliamentary elections were aborted in December 2021. A previous French-led effort to stage elections, in 2018, had also foundered. A series of unelected and competing interim governments have governed Libya for nearly a decade.

Elections planned for 2022 were cancelled due to disputes over the qualifications of candidates to stand, which masked a deeper reluctance by politicians in both the east and west of the country to risk a democratic winner-takes-all process that might see them lose access to state patronage and power.

One exasperated western diplomat said: “They are some making sincere efforts at mediation, but the abiding character of too many Libyan politicians on both sides of the divide is [to] pay lip service to the necessity of elections and then do everything possible to throttle them so they can continue lining their pockets. We may have to stop hoping we can persuade these people to agree to elections and instead find a way to work around them.”

The meeting on 13 January of special envoys convened by the US envoy, Richard Norland, will look at how to stage elections and whether to urge the new UN special envoy Abdoulaye Bathily to set a deadline for establishing a national Libyan body to agree on elections.

The growth of the Libyan economy is projected to be 17.9% this year, the highest in Africa, but despite this some estimates show that nearly a third of Libyans, especially in the south, live at, or below, the poverty line.

Libya’s political leaders have gone round in circles with competing proposals for the constitutional basis of the elections. Months of talks in Cairo between Libya’s House of Representatives speaker, Aguila Saleh, from the east of the country, and the head of the high council of state, Khaled al-Meshri, representing the western area, made some progress, but did not resolve whether dual nationals could stand for the presidency, or for how long candidates would have to permanently resign from any existing position if they wished to stand.

Behind these disputes are efforts from either side to bar controversial candidates from standing. Norland has claimed there is no impediment to Meshri and Saleh setting an election date, but the two men have refused to do so.

The reputation of the political class has hardly been enhanced by Central Bank of Libya figures published last week showing total state spending rose last year to 127.9bn Libyan dinars, an increase of 42bn dinars or about $9bn in 2021.

Figures on how the state is spending money have been unclear for years, with a full UN-commissioned audit of the CBL accounts never published.

Public salaries, including those for politicians, rose 42% to 47bn dinars for 2022, compared with 33bn dinars the previous year. This was the single biggest expenditure item. Fuel subsidies racked up 20bn dinars, and development and projects 17.5bn dinars. The Libyan National Oil Corporation was given 34bn dinars – about $6bn.

The House of Representatives, last elected in 2016, was paid 144m dinars or $30m. The high council of state, the remnants of an oversight parliament elected in 2012 under the control of the west and led by Meshri, received 49m dinars, or $10m.

The interim Tripoli-based government, also supported by Turkey and led by the interim prime minister, Abdul Hamid Dbeibah, has also paid out billions in benefits.

Critics say even allowing for the devaluation of the Libyan dinar, the scale of the salaries and disbursements suggest that an unaccountable political class is eager to avoid the verdict of the ballot box.

Tim Eaton, a Libya expert at Chatham House, said: “These central bank figures are still opaque, but clearly spending on salaries is staggeringly high. Given the amount of money that is supposedly being spent on public services, ordinary people in Libya are simply not receiving an adequate level of service.”

The experienced former UN envoy in Libya, Stephanie Williams, recently said: “A transactional ruling class, some of whose network can be traced back to the days of the former regime, uses Libya’s state and sovereign institutions as cash cows in what could be described as a ‘redistributive kleptocracy’, bringing into their circles on a regular basis just enough of their compatriots to sustain the system.” She said some Libyan politicians simply did not see the need for elections.

Popular frustration with the lack of elections exists. In a statement Aref Nayed, chairman of the Ihya Libya movement, said: “There is nothing to prevent elections except for a corrupt political junta that is fighting each other over everything, but it is united in confiscating the right of the Libyan people to determine their own destiny and share their wealth.”

Zahra Langhi, a women’s rights activist, said “political elites including [the] governor and central bank board have long benefited from a culture of impunity. Libya is witnessing a stalemate in the political track as well as division and capture of state institutions that defrauds the Libyan people of their right to elect their representatives”.

The debate among western diplomats is about whether to set a hard deadline for Libya’s political institutions to reach agreement on the basis of elections, and if that deadline is not met, whether to launch a new process.

Libyan political institutions have long lost legitimacy with the House of Representatives, which was elected in June 2014 on a turnout of less than 20%. Saleh, the speaker, was elected with little more than 1,000 votes. The high council of state, broadly the upper house and based in the west with a strong Muslim Brotherhood constituency, was elected in 2016.

In February 2021, Dbeibah was elected head of the interim government by a 75-strong UN appointed body and was charged solely with preparing for the elections, but before the election date was aborted he had reneged on a pledge not to stand in the elections, contributing to the impasse that led to the elections being called off.