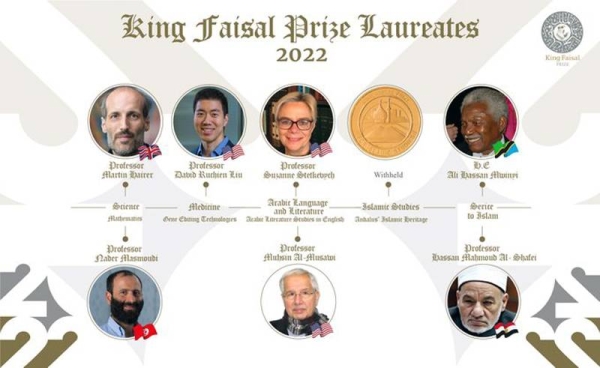 King Faisal Prize award ceremony to be held on March 29

Under the auspices of the Custodian of the Two Holy Mosques King Salman, King Faisal Prize award ceremony will be held on March 29 in Riyadh to honor laureates for 2022.
Seven scholars who enriched humanity with key and invaluable achievements and discoveries, and who excelled in the fields of serving Islam, Arabic Language & Literature, Medicine, and Science, will be honored in Riyadh.

This year the Prize is honoring the former Tanzanian President Mwinyi, who actively participated in Islamic advocacy and promoted religious tolerance. He established Islamic schools and translated many resources and references in hadith, jurisprudence, and Prophet Muhammad’s (pubh) biography into Swahili; the language spoken by millions of people in East Africa.

He also contributed to educating Muslims and to improving their educational, social, and economic conditions. He is regarded as an exemplary model in guiding his country towards reform.

The Service to Islam Prize will also be awarded to Prof. Hassan Mahmoud Al Shafei, who was the president of the Arabic Language Academy in Cairo from 2012 to 2020, and who held several academic positions and established a series of institutes concerned with Al-Azhar studies.

He contributed to the establishment of the International Islamic University in Islamabad in Pakistan and the development of its colleges’ curricula. He worked at that university as an assistant professor, then he was appointed as a dean, and then a president in 1998.

The Islamic Studies Prize, which focuses on “Islamic Heritage of Al-Andalus” this year, is withheld because the nominated works do not meet the criteria of the prize.

As for the Arabic Language & Literature Prize about “Arabic Literature Studies in English”, it will be presented to two laureates: Prof. Suzanne Stetkevych; Chair of the Department of Arabic & Islamic Studies Chair at Georgetown University, and Professor Muhsin Al-Musawi; professor of Arabic and Comparative Literary Studies at Columbia University.

Prof. Suzanne Stetkevych’s extensive research and numerous works have analyzed Arabic literature with unmatched depth from the pre-Islamic period to the Nahda/revivalist period.

Her research approach, which is characterized by its application of varied methodologies, resulted in the renewal of the critical perspective and methods of studying classical Arabic poetry. Her publications include, Abi Tammam and the Poetics of the Abbasid Age and The Mute Immortals Speak: Pre-Islamic Poetry.

In parallel, the research and studies of the literary critic and novelist Prof. Muhsin Al-Musawi have made great impact on students and researchers in the field of Arabic studies, both in the Arab world and the West, for his distinctive methods of presentation, analysis, critical interpretation, and openness to Arab and international creative texts in prose and poetry.

He handled Arabic literature as a world literature and authored 39 books and over 60 scholarly articles. He also published numerous research papers specialized in Arabic Literature Studies in English in refereed journals and periodicals.

The Medicine Prize focused on “Gene-Editing Technologies” will be awarded to Prof. David Liu, Richard Merkin Professor and Director of the Merkin Institute of Transformative Technologies in Healthcare. Prof. Liu invented the first “base editor” to make alterations on the DNA and the genes, by replacing letters in the DNA base.

This pioneering discovery, which represents a scientific revolution, may pave the way for possibly treating genetic diseases by repairing the gene from a form that causes a disease, back to a healthy one.

As for the Science Prize, two laureates will receive it for their distinctive work on the topic of “Mathematics”. The first laureate is Prof. Martin Hairer, chair in Probability and Stochastic Analysis at Imperial College’s Department of Mathematics. His work has been in the general area of probability theory with a focus on the analysis of stochastic partial differential equations.

He recently developed the theory of regularity structures which gave a precise mathematical meaning to several equations that were previously outside the scope of mathematical analysis.

The other Science laureate this year is Prof. Nader Masmoudi; a distinguished Professor of Mathematics at the New York University of Abu Dhabi and a head of his Research Center on Stability, Instability and Turbulence. He was able to unlock the mystery around many physics problems, which remained unsolved for centuries.

Dr. Masmoudi found a flaw in “Euler’s” mathematical equations, which for more than 2 centuries described the motions of fluids under any circumstance. He discovered that these equations do not apply to all circumstances, as previously thought. His work helped solve many problems related to fluid-modeling like weather predictions.

Since 1979, King Faisal Prize has awarded 282 laureates from 44 different nationalities who have made distinguished contributions to serving Islam, Muslims, and humanity at large, and who have conducted outstanding research and made pivotal discoveries and findings in major fields of Science, Medicine, Islamic Studies, and Arabic Language & Literature.

Each prize category out of the 5 different categories is endowed with SR750,000 (an equivalent of $200,000); a 24-carat gold medal, weighing 200 grams, and a Certificate written in Arabic calligraphy signed by the Chairman of the Prize board, Prince Khalid Al-Faisal, inscribed with the Laureate’s name and a summary of their work which qualified them for the prize.