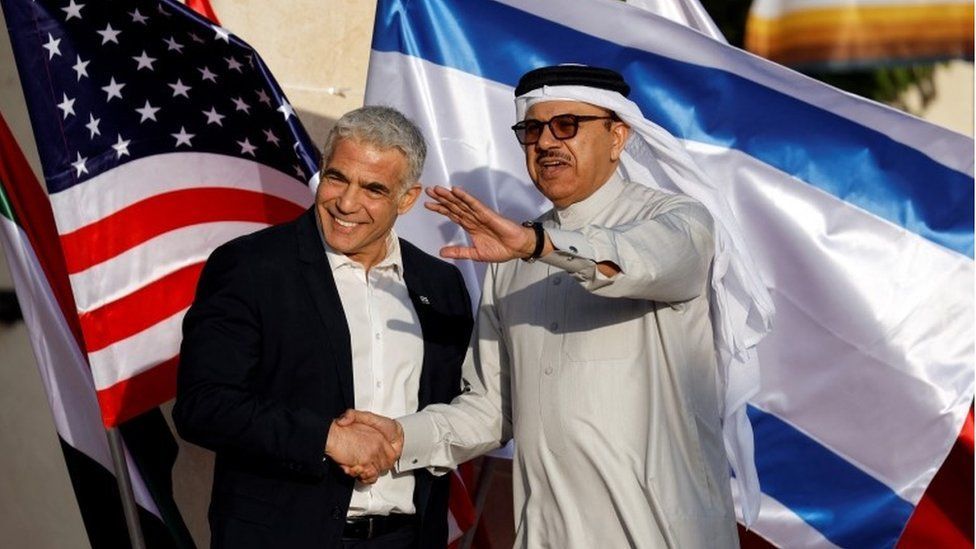 Israel's foreign minster says deepening ties with friendly countries from the Arab League will "first and foremost" help counter the threat from Iran.
He was speaking after a summit held in Israel for the first time with top diplomats from Arab League countries and the US.

Three of them - the United Arab Emirates (UAE), Bahrain and Morocco - formed ties with Israel only in 2020.

The foreign ministers pledged to continue to develop the partnership.

The Arab League diplomats, along with US Secretary of State Anthony Blinken and Egypt's foreign minister, also reiterated their support for a peaceful solution to the Israel-Palestinian conflict. All back the creation of an independent Palestinian state alongside Israel as part of that, something Israeli Prime Minister Naftali Bennett has ruled out.

The Palestinian foreign ministry called the summit "a harsh attack against the Palestinian people", although it did not directly accuse the Arab League participants, the Times of Israel reported.

As the ministers gathered at a hotel in Israel's Negev desert on Sunday night, two Israeli Arab gunmen launched an attack in the northern Israeli city of Hadera, killing two policemen and wounding six people. The gunmen were shot dead by counter-terrorism officers. The Islamic State group said it had carried out the attack.

The foreign ministers condemned the killings of the Israeli officers, with Morocco's saying the summit was "the best response" to such attacks.

After the meeting on Monday morning, Israeli Foreign Minister Yair Lapid said the delegates had agreed to make the event "a permanent forum".

"What we are doing here is making history, building a new regional architecture based on progress, technology, religious tolerance, security and intelligence co-operation. This new architecture, the shared capabilities we are building, intimidates and deters our common enemies, first and foremost Iran and its proxies."

Meanwhile the King of Jordan, Abdullah II, visited Palestinian Prime Minister Mahmoud Abbas in the West Bank city of Ramallah on Monday in his first such trip since 2017. Mr Blinken also held talks with Mr Abbas on Sunday, where he reiterated his support for a two-state solution to the Israel-Palestinian conflict and for increasing funding to the Palestinians.

The Israel-US talks took place at a time of growing Israeli fears that the US is on the brink of signing a new agreement with Iran to curb its nuclear programme in return for an end to crippling US-led sanctions. It is also concerned that the US will remove Iran's powerful Islamic Revolution Guard Corps (IRGC) from its list of terrorist groups as part of a new nuclear deal.

Former US President Donald Trump pulled out of a 2015 global nuclear agreement with Iran and restored sanctions in a move which led Iran to significantly advance its nuclear activities which had been barred by the accord.

Israel says it believes a new deal will be weaker than the previous one and enable Iran to intensify its military activities across the region.
#Donald Trump  #Coronavirus