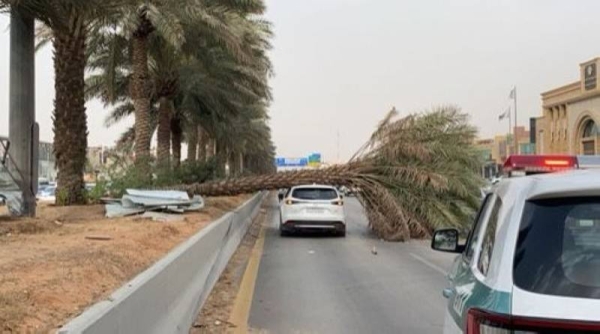 Social media activists shared a stunning video clip documenting the moments of a date palm tree falling over the car of a Saudi citizen amid heavy sandstorm that swept through Riyadh city on Saturday.

The citizen, who was in the car, escaped miraculously without any injuries. But in a swift turn of events, he was penalized for the accident. He was so upset with the Najm for Insurance Services Company for registering 100 percent error for no fault of his.

A motorist, who traveled behind the car that was involved in the accident, took the video of the sandstorm and the accident. The video posted by him on the social media became an instant hit.

“The palm tree fell over the car. There were three cars between me and that car,” he tweeted while posting the video.

Amid the heavy sandstorm that caused date palm trees to be shaken forcefully one of them got uprooted and fell on a citizen’s car while he was traveling through a public road in the capital city. Later, the citizen published pictures that showed a palm tree falling on his car.

He commented on the photos, saying: “After the palm tree incident, praise be to God for His kindness as I am keeping fine.”

He further added: “I thank everyone who inquired about me, with the abundance of your feelings that exceeded above this incident. I thank the Riyadh Traffic Department for its good cooperation,” he said, while adding surprisingly, “Now, my question is to Najm, why was I charged with 100 percent error?!”

For their part, social media activists shared their comments on the video, showing their feelings of compassion and solidarity with the citizen, stating that the Riyadh Municipality should compensate the citizen for what damage the falling date palm tree had caused to his car.

They also objected to the error on the part of Najm for finding fault with the innocent citizen and slapping him with 100 percent error.