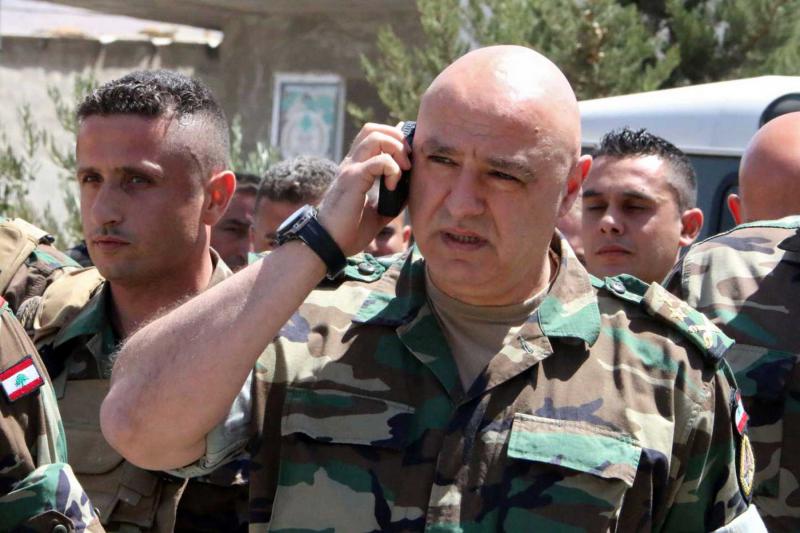 Lebanese Army Commander Gen. Joseph Aoun stated that security forces “will not allow chaos or strife to find its way to our country,” addressing military personnel on the occasion of 77th Army Day.
Pledging to thwart any attempts to destabilize the state, he said: “We are concerned with our institution’s cohesion and continuity in carrying out its missions, along with Lebanon’s security and stability.”

The army chief’s warning came as Lebanese protesters stormed the Ministry of Energy in Beirut on Thursday, chanting: “We will continue the journey as free revolutionists until the fall of the thugs’ rule.”

Protesters who demanded to meet with Energy Minister Walid Fayyad were not allowed access to the ministry’s office floors by internal security forces.

From the ground floor, they protested power cuts and most of the Lebanese people’s inability to afford private generator fees.

A protester from Akkar, in northern Lebanon, said: “There has been a power outage in Akkar for months. What are you, as employees, doing in your offices, getting your salaries as we drown in darkness?”

Another protester said: “We get half an hour of electricity every week, and the private generator fees are more than $200. Have some mercy!”

Activist Wassef Al-Harake stressed that “protests will continue in all ministries.”

He added: “We demand living in dignity. They hid flour so they could sell it at expensive prices until the subsidy is fully lifted, exactly like other subsidized items.

“People can no longer tolerate this. They are deprived of electricity, bread and medicines.”

An altercation took place between protesters and employees at the ministry who are affiliated with the Free Patriotic Movement.

Al-Harakeh said that “there will be more confrontations everywhere with the authorities, and peaceful disputes are the only solution.”

The Union of Workers and Employees of Electricity of Lebanon announced on Thursday that they were joining the public sector employees’ open-ended strike to protest the failure of including them in public institutions and independent interests.

He assured that “another decree will be issued next week that will make public institutions, independent interests, municipalities, governmental hospitals, social security and Télé Liban equal with the public sector, in terms of production grant.”

The Finance Ministry’s employees resumed work on Thursday to complete the payment of salaries to civilians, military personnel and retirees.

As longer queues form in front of bakeries, more disputes have erupted between bakery owners and people waiting to buy bread — and between people themselves.

Antoine Seif, head of the Syndicate of Bakery Owners in Mont-Liban, said: “While we were supposed to receive 27,000 tons of wheat in June, we only received a quantity of 7,000 or 8,000 tons. If wheat is smuggled, that is the state’s responsibility.

“The reason for the crisis is not the result of misusing wheat. The reason is the lack of wheat.”

He clarified that the “Ministry of Economy and Trade has established a mechanism to distribute wheat to bakeries fairly, and we hope that the crisis will end.”

In his address to army personnel, Aoun also said: “You are going through exceptional circumstances, and similarly to our people, you are suffering from an economic and financial crisis that started around three years ago and led to the paralysis of most state sectors and institutions, resulting in negative repercussions in various fields.

“The military institution alone is still ready to take on its full responsibilities toward the homeland and its people, with determination and conviction.”

Aoun added: “You are fighting for survival, as Lebanon desperately needs you today.

“Continue to be ready to confront all dangers,” he said, referencing such diverse threats as Israel, terrorism and drugs.