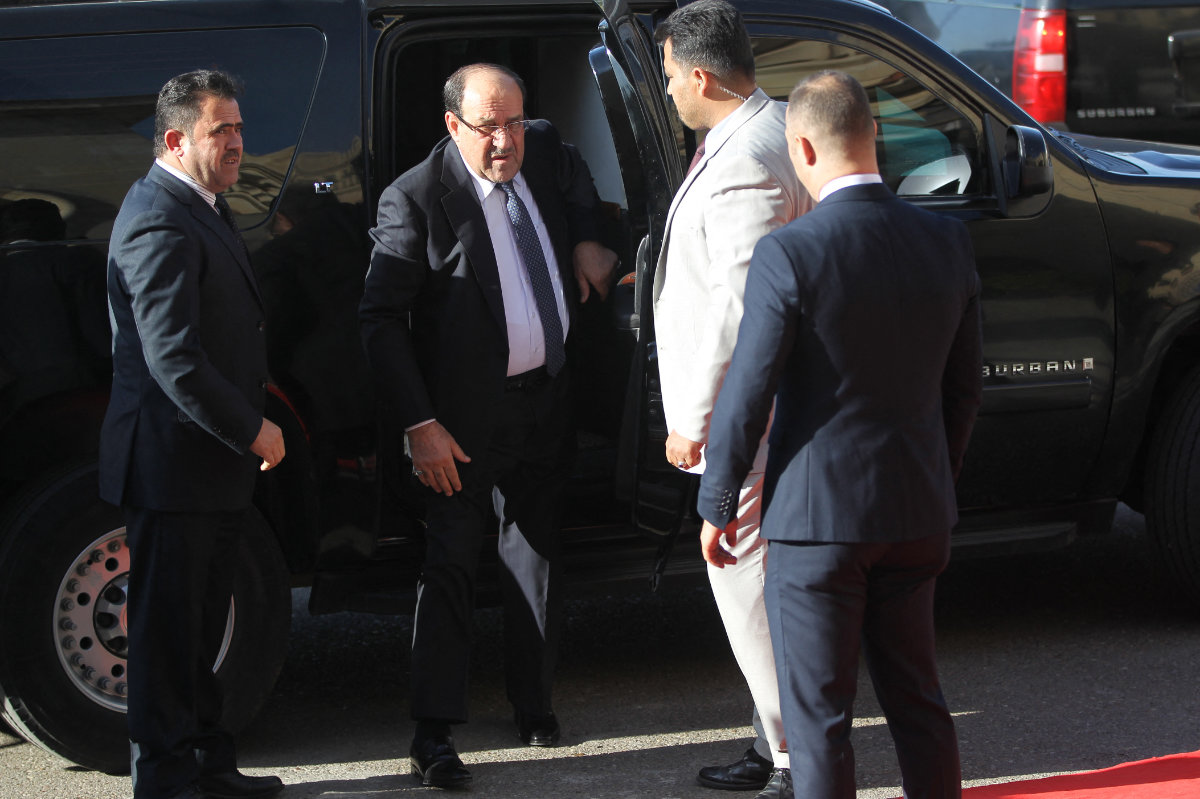 In and of themselves, the audio recordings are scarcely newsworthy. They simply confirm what is a matter of public knowledge in Iraq: That the antipathy between two of the country’s most powerful Shiite power brokers, Nouri Al-Maliki and Muqtada Al-Sadr, is deep, and their relations with other Iraqi politicians complicated.

The real significance of the recordings, according to analysts, lies in their revelation of the deep divisions and enmities that plague Iraqi politics, and are likely to continue hindering the process of government formation in the months to come. 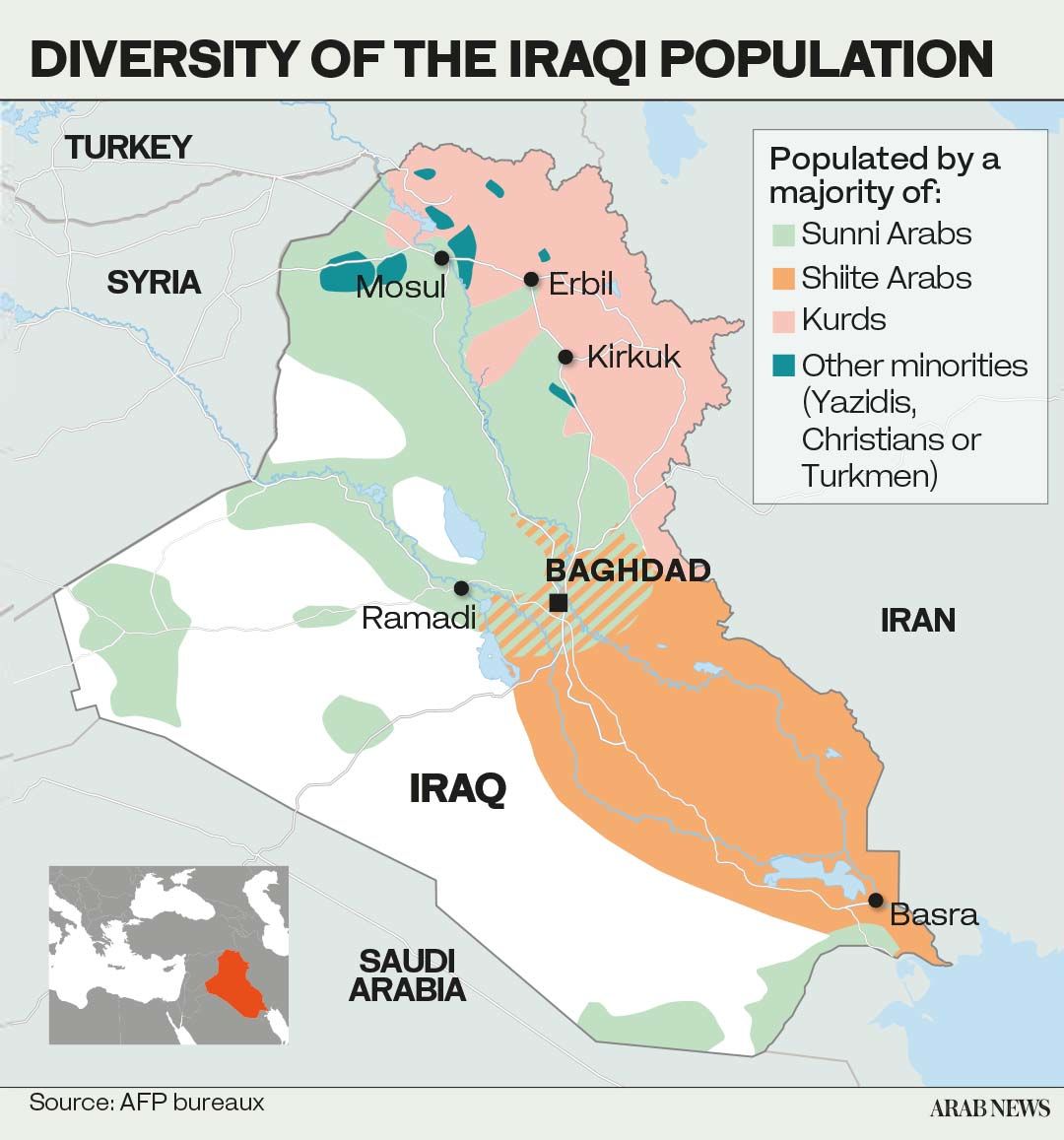 In the recordings, known in Iraq as the “Maliki Wikileaks,” the man who served as prime minister between 2006 and 2014 is heard denouncing his political rivals and talking about an imminent civil war.

“Iraq is on the verge of a devastating war from which no one will emerge unscathed, unless the project of Muqtada Al-Sadr, Masoud Barzani, and Muhammad Al-Halbousi is defeated … and if necessary, I will attack Najaf,” Al-Maliki is heard declaring in one of the many recordings, whose authenticity he disputes.

He even claims the British are behind a conspiracy to place Al-Sadr in charge of Iraqi Shiites and then assassinate him, paving the way for the restoration of Sunni rule over the country 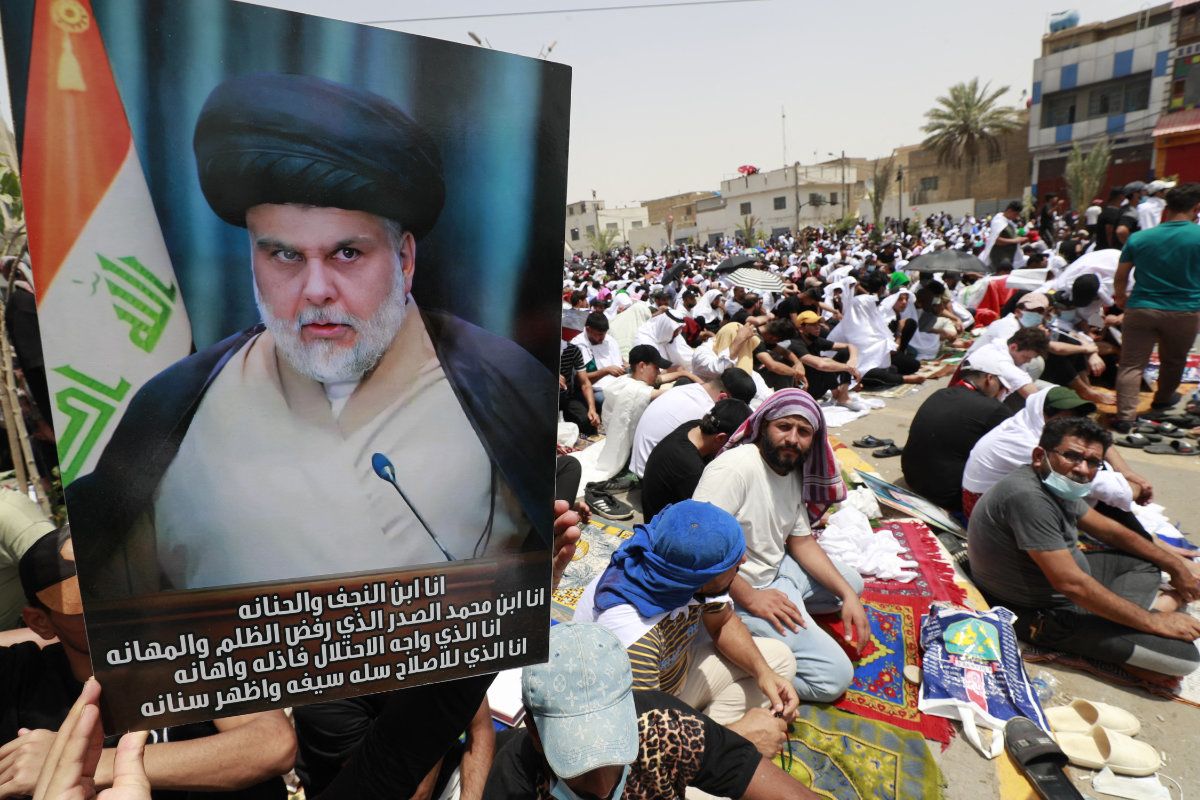 Iraqi Shiite cleric Muqtada Al-Sadr is depicted in a placard during a collective Friday prayer in Sadr City, east of Baghdad, on July 15, 2022.

The recordings, released by journalist and activist Ali Fadhel, appear to be at least two months old since they refer to the tripartite Save the Homeland parliamentary coalition — consisting of the Sadrist Movement, Barzani’s Kurdistan Democratic Party, and Halbousi’s Progress Party — that competed against the pro-Iran Shiite parties under the umbrella of the Coordination Framework, of which Al-Maliki’s State of Law is a part.

Al-Sadr ordered all 73 of his MPs to resign in mid-June after months of trying to form a majority government without the Framework, which favors another consensus-type government that has been the norm in post-2003 Iraq. 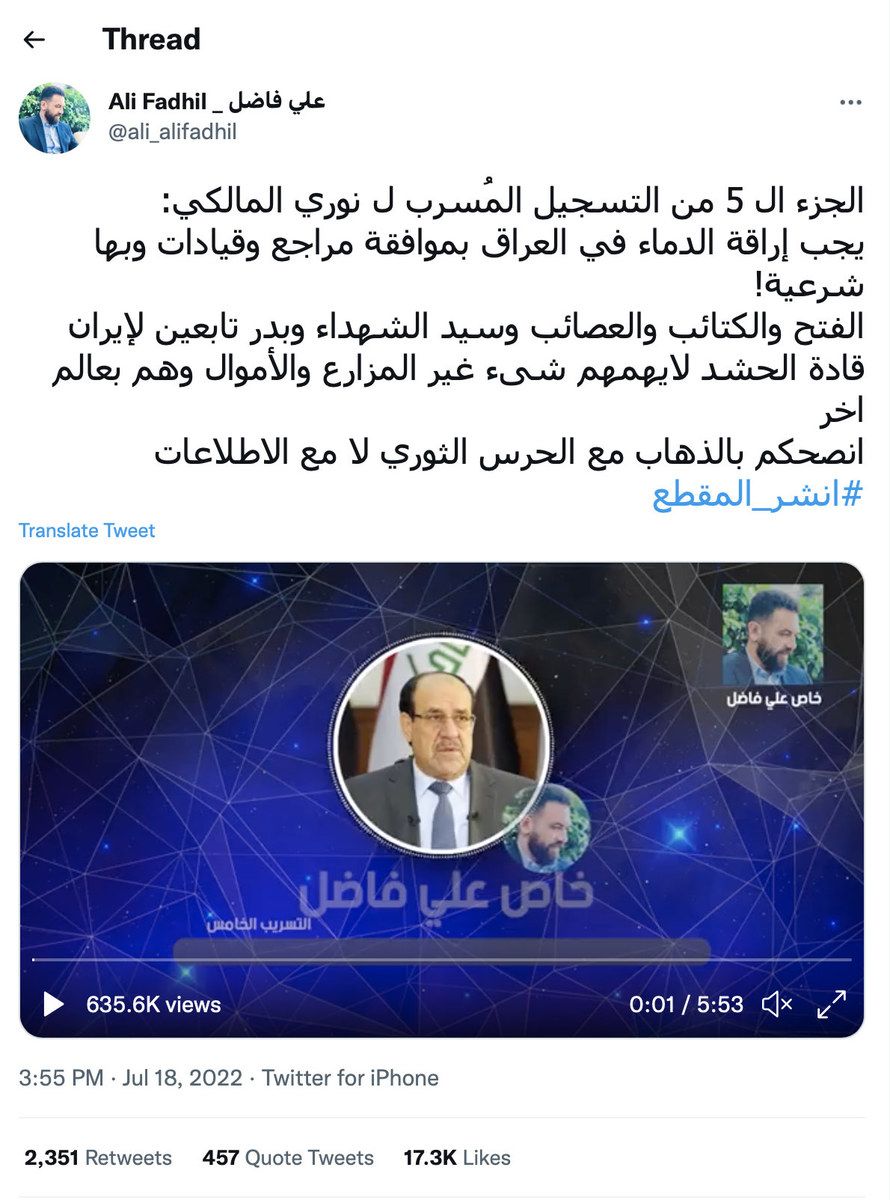 The audio recordings, released by Iraqi journalist and activist Ali Fadhel on Twitter, appear to be at least two months old.

The mass resignation of the Sadrists brought an end to the Save the Homeland alliance and the prospect of a majority government in Iraq along with it.

The Framework has been negotiating the formation of another government with the remaining parliamentary blocs ever since.

Iraq held early parliamentary elections in October 2021 but still has not been able to form a new government. The country is currently governed by a caretaker government led by Mustafa Al-Kadhimi, the incumbent prime minister.

On the surface, Iraq appears on the verge of more instability. The Sadrists are out of Parliament and back on the street, where Al-Sadr has repeatedly demonstrated his capability of swiftly mobilizing hundreds of thousands of devoted followers, most of them poor and angry with the political elite.

The political deadlock in Parliament continues, and the prospect of forming a new government remains distant despite the passage of about 10 months since the last election. Now, Al-Maliki’s incendiary pronouncements have been added to the mix.

Is Iraq at risk of severe conflagration, or even a civil war of some kind, if this state of affairs persists? 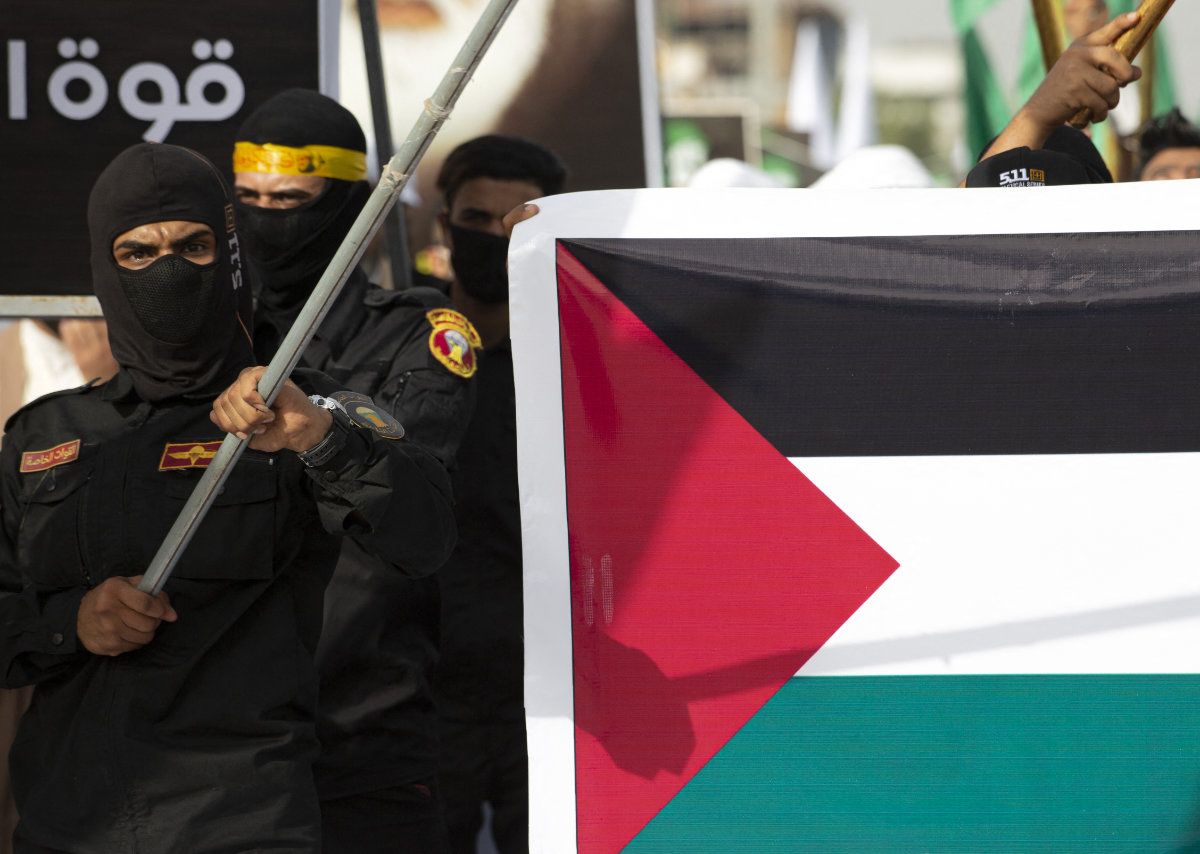 “Al-Maliki’s comments seem to point towards him believing things would escalate to possible street clashes, which have happened before between Shiite factions,” Joel Wing, author of the “Musings on Iraq” blog, told Arab News.

Wing believes the recordings are authentic, noting that only Al-Maliki and his allies have claimed otherwise.

He pointed out that the Framework has already resorted to political violence since the October election, including bombing the houses and offices of rival political parties. A series of rocket and drone attacks have also been carried out against Iraqi Kurdistan to pressure the KDP.

“The political parties are growing increasingly frustrated over not being able to form a government,” Wing said. “Al-Maliki’s comments just add more fuel to the fire, and his talk of political violence shows what lengths some leaders are willing to go to defeat their opponents.”

Wing does not see any sign that the present political deadlock will end anytime soon, which will only increase tensions and the possibility of armed clashes. Nevertheless, he is doubtful that the current situation will degenerate into an intra-Shiite conflict or civil war in Iraq. 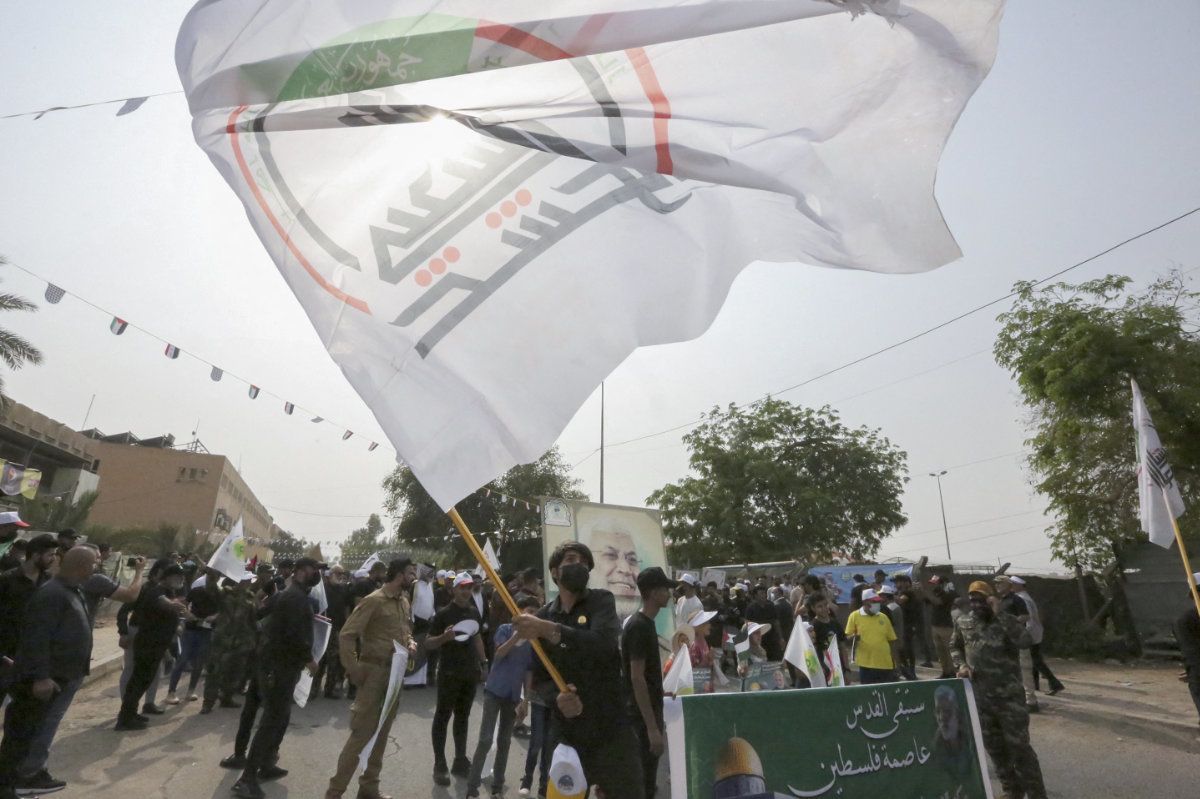 An Iraqi protester lifts a giant flag of of the Hashd al-Shaabi during a rally to mark Al-Quds (Jerusalem) day on Baghdad's Aba Nawas street on April 29, 2022.

“I don’t see a civil war coming, but the Framework and Sadrists have already resorted to violence, which could escalate given the current inability of the political parties to come to any compromises,” he said.

The political deadlock will likely persist given the continued failure of the Framework and Kurdish parties to select the country’s next president and prime minister.

A candidate for the presidency, a largely symbolic role in Iraq reserved for the Kurds, must be nominated before Parliament can elect the next prime minister. However, the KDP and the Patriotic Union of Kurdistan have so far failed to agree on a common candidate. 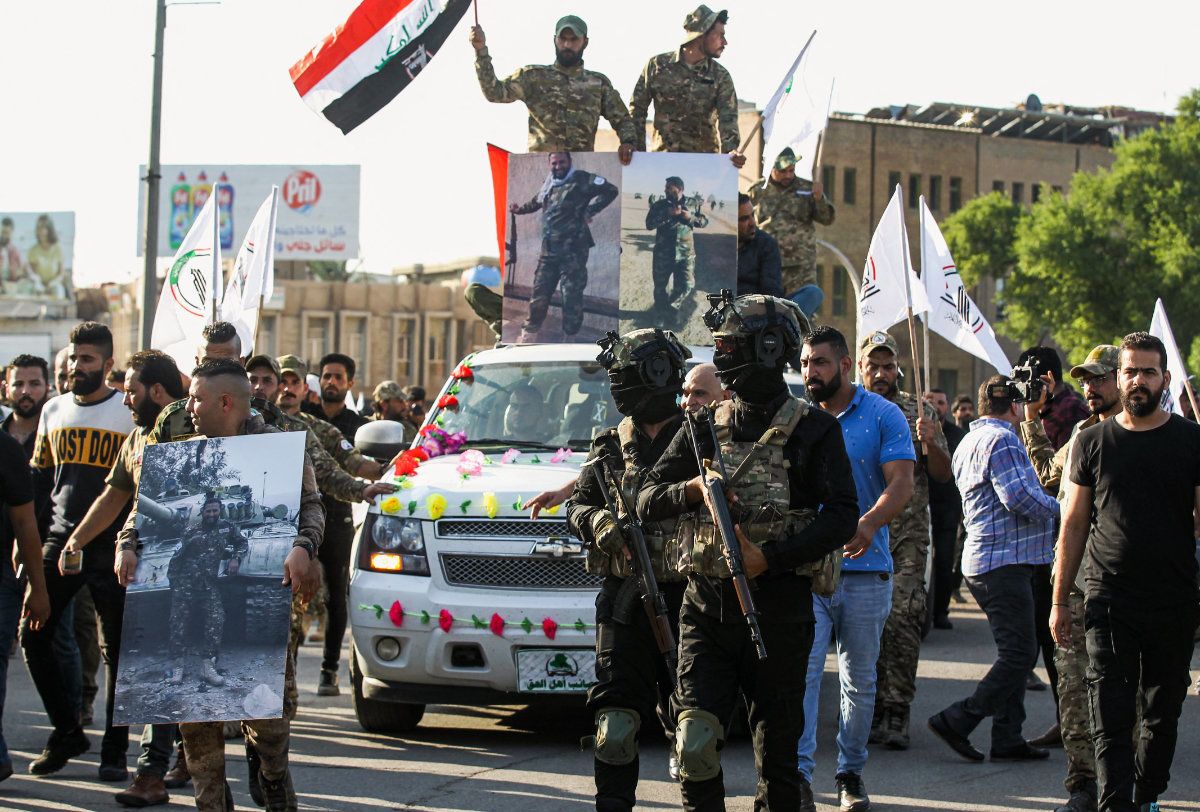 Furthermore, as Wing pointed out, “there are deep divisions within the Framework itself over who should be prime minister.

“That’s the reason why there’s increasing talk about either having new elections or just keeping the present incumbent in office,” he said.

Wing’s opinion that the Al-Maliki recordings are authentic is seconded by Kyle Orton, an independent Middle East analyst.

“The leaked recordings are indicative that Al-Maliki retains his belief in the legitimacy of political violence, which was the Dawa Party position since it was co-opted by the Iranian Revolution in 1979,” he told Arab News.

“Within Iraq, this is not so unusual a position: Since the fall of Saddam Hussein, many in the political elite have done politics by day and terrorism by night.” 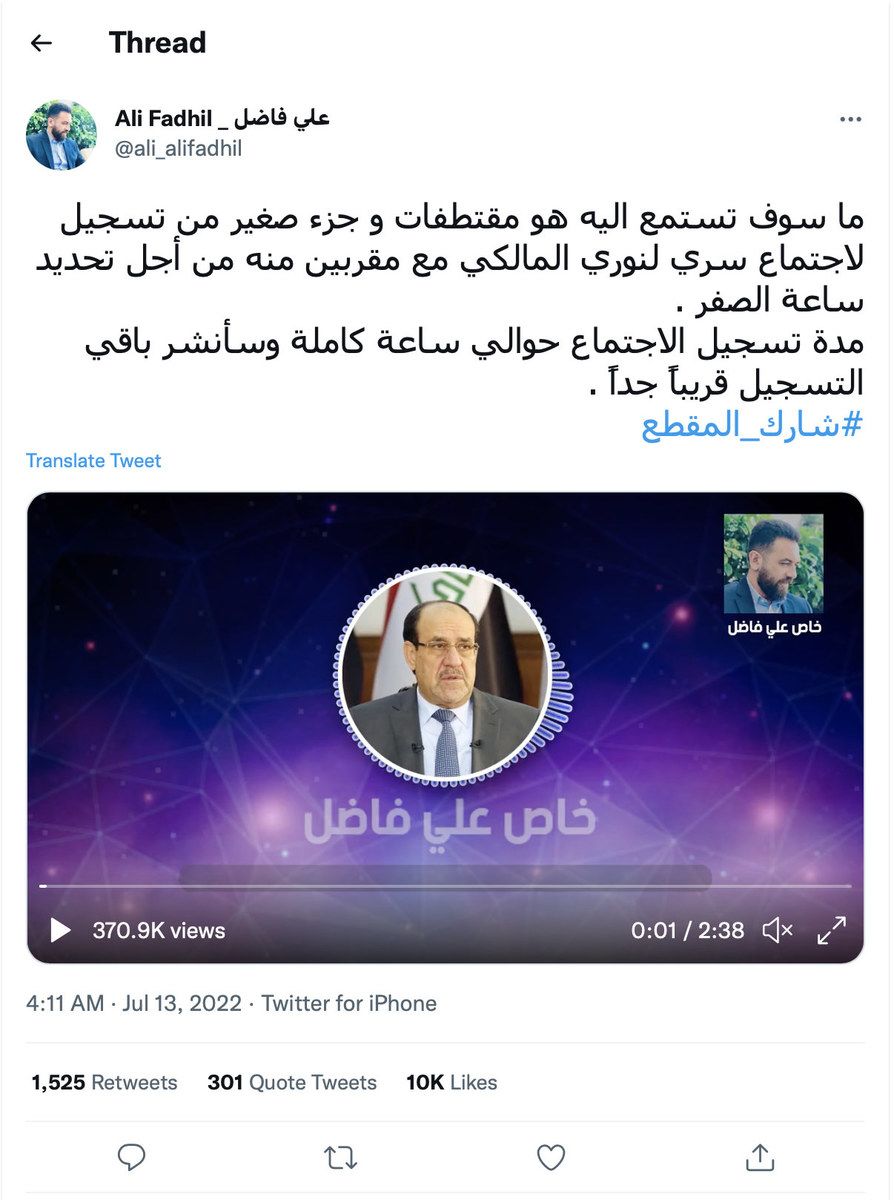 The audio recordings, released by Iraqi journalist and activist Ali Fadhel on Twitter, appear to be at least two months old.

Orton too doubts the leaks could lead to “anything like a civil war” in the near future. On the contrary, he believes the main thing that “they show is that Iraqi politics is played within limits set by the IRGC (Iran’s Islamic Revolutionary Guard Corps).

“This is a factional fight between Iranian clients, even if the game is being played a bit rougher than in the past,” he said. “But the IRGC controls the security architecture in Iraq, and its militias have the streets ultimately, so it will not allow a collapse of that kind.”

Summing up the situation, Orton said: “In terms of the outcome, again, the question really leads back to Tehran: Whether the Iranians are affronted by Al-Sadr overstepping the bounds or judge that Al-Maliki is too politically damaged by this to be viable.”

Unlike Wing and Orton, Nicholas Heras, the deputy director of the human security unit at the Newlines Institute for Strategy and Policy, believes that an intra-Shiite civil war is a strong possibility. 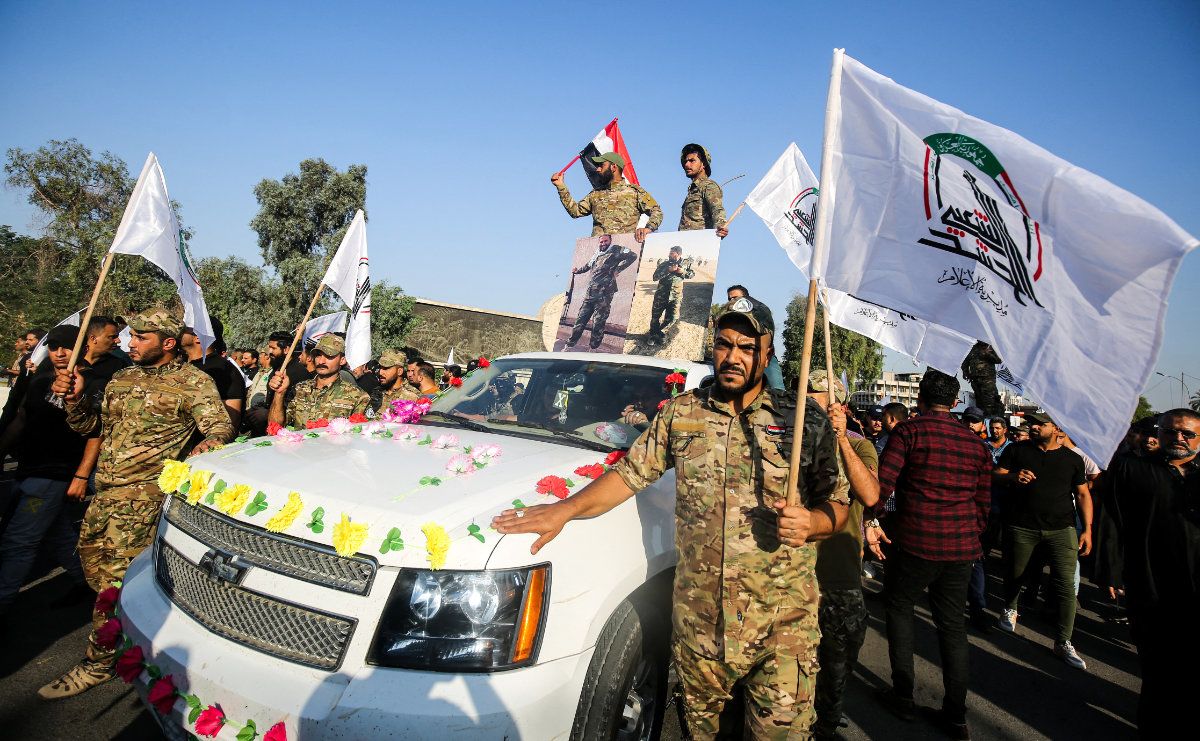 “Al-Sadr knows Al-Maliki hates him, with or without any new recordings,” Heras told Arab News. “Nouri Al-Maliki is the type of Shiite politician that Muqtada Al-Sadr has made a political career out of bashing for being out of touch with the needs of the Iraqi people, especially the Shiites.

“Iraq is on the verge of an intra-Shiite civil war. The situation in Iraq is too far gone, and the most tensions are among the Shiites.”

Looking to the future of Iraq, Heras said: “It is boiling down to a dispute between Al-Sadr and his allies and an entire range of Shiite politicians and their affiliated militias.

“The Kurds and Sunnis are, for all intents and purposes, bystanders to this looming conflict.”