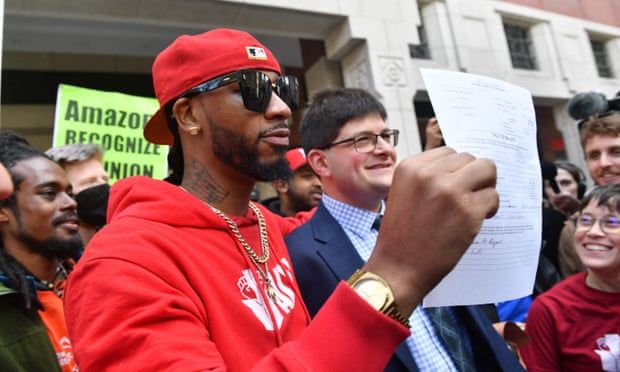 A post-Covid jobs recovery has strengthened workers’ hand – companies posting record profits don’t need government to slow the economy
On Friday, Amazon – America’s wealthiest, most powerful and fiercest anti-union corporation, with the second-largest workforce in the nation (union-busting Walmart being the largest), lost out to a group of warehouse workers in New York who voted to form a union.

If anyone had any doubts about Amazon’s determination to prevent this from ever happening, its scorched-earth anti-union campaign last fall in its Bessemer, Alabama, warehouse should have put those doubts to rest.

In New York, Amazon used every tool it had used in Alabama. Many of them are illegal under the National Labor Relations Act but Amazon couldn’t care less. It’s rich enough to pay any fine or bear any public relations hit.

The company has repeatedly fired workers who speak out about unsafe working conditions or who even suggest that workers need a voice.

As its corporate coffers bulge with profits – and its founder and executive chairman practices conspicuous consumption on the scale not seen since the robber barons of the late 19th century – Amazon has become the poster child for 21st-century corporate capitalism run amok.

Much of the credit for Friday’s victory over Amazon goes to Christian Smalls, whom Amazon fired in the spring of 2020 for speaking out about the firm’s failure to protect its warehouse workers from Covid. Smalls refused to back down. He went back and organized a union, with extraordinary skill and tenacity.

Smalls had something else working in his favor, which brings me to Friday’s superb jobs report from the Bureau of Labor Statistics. The report showed that the economy continues to roar back to life from the Covid recession.

With consumer demand soaring, employers are desperate to hire. This has given American workers more bargaining clout than they’ve had in decades. Wages have climbed 5.6% over the past year.

The acute demand for workers has bolstered the courage of workers to demand better pay and working conditions from even the most virulently anti-union corporations in America, such as Amazon and Starbucks.

Is this something to worry about? Not at all. American workers haven’t had much of a raise in over four decades. Most of the economy’s gains have gone to the top.

Besides, inflation is running so high that even a 5.6% wage gain over the past year is minimal in terms of real purchasing power.

But corporate America believes these wage gains are contributing to inflation. As the New York Times solemnly reported, the wage gains “could heat up price increases”.

This is pure rubbish. Unfortunately, the chair of the Federal Reserve Board, Jerome Powell, believes it. He worries that “the labor market is extremely tight” and to “an unhealthy level”.

As a result, the Fed is on the way to raising interest rates repeatedly in order to slow the economy and reduce the bargaining leverage of American workers.

Pause here to consider this: the commerce department reported on Wednesday that corporate profits are at a 70-year high. You read that right. Not since 1952 have corporations done as well as they are now doing.

Amazon’s profits are in the stratosphere, but it’s not just Amazon. Across the board, American corporations are flush with cash.

Although they are paying higher costs (including higher wages), they’ve still managed to increase their profits. How? They have enough pricing power to pass on those higher costs to consumers, and even add some more for themselves.

When American corporations are overflowing with money like this, why would wage gains heat up price increases, as the Times reports? In a healthy economy, corporations would not be passing on higher costs – including higher wages – to their consumers. They’d be paying the higher wages out of their profits.

But that’s not happening. Corporations are using their record profits to buy back enormous amounts of their own stock to keep their share prices high, instead.

The extraordinary win of the workers of Amazon’s Staten Island warehouse is cause for celebration. Let’s hope it marks the beginning of a renewal of worker power in America.

Yet the reality is that corporate America doesn’t want to give up any of its record profits to its workers. If it can’t fight off unions directly, it will do so indirectly by blaming inflation on wage increases, and then cheer on the Fed as it slows the economy just enough to eliminate American workers’ new bargaining clout.
#Covid