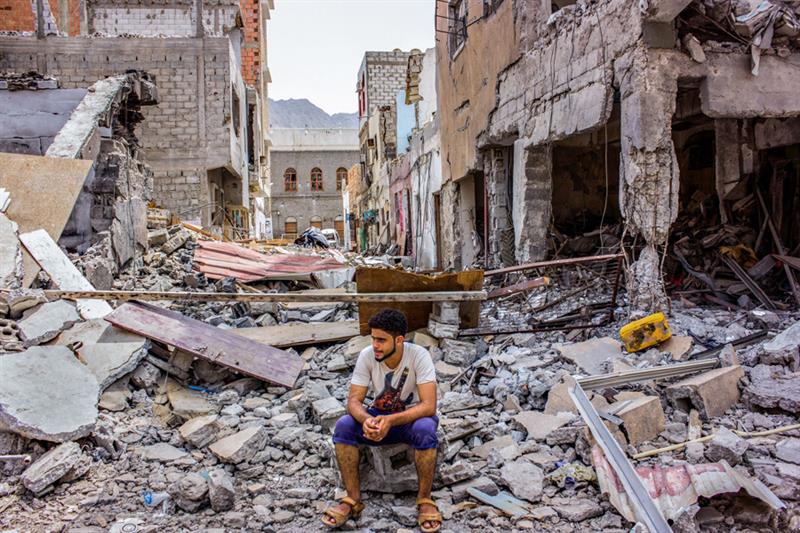 No winners or losers in Yemen

The past year brought increased military escalation to Yemen, with its consequent toll on an already disastrous humanitarian situation, writes Ahmed Eleiba
The Yemeni crisis is much the same at the end of the outgoing year as it has been during the past six years since the Saudi-led Arab Coalition launched Operation Decisive Storm in March 2015: there is still no end in sight.

Like other irregular wars, the one in Yemen will not produce a winner or a loser. Nevertheless, the peacemaking efforts continue to flounder, and this applies not only to the battle between the internationally recognised government of Yemen and the Ansarullah (Houthi) insurrection, but also to the crisis between the government and the secessionist Southern Transitional Council.

If anything, 2021 brought increased military escalation with its consequent toll on an already disastrous humanitarian situation.

The new administration that came to power in Washington at the outset of this year has failed to live up to the hopes pinned on it and achieve a breakthrough in the Yemeni conflict. The attention that US President Joe Biden gave to the Yemeni question in his inaugural address gave the impression that it would receive almost as much priority as the Chinese and Russian questions. This impression was reinforced when the Biden administration revoked the terrorist designation that Washington had applied to the Houthis in the final days of the Trump administration.

In so doing, Biden hoped to give the Houthis an incentive to make peace, towards which end he appointed Tim Lenderking as the US special envoy to Yemen in order to help restart the stalled negotiations. Washington also helped draw up a new plan for a negotiation process, billing it as a new peace initiative from the Arab Coalition. It told Iran that it had to cease its support for the Houthis and its regional expansionist policies as a precondition for the resumption of the nuclear agreement with Tehran.

None of these efforts played out as planned. Iran is more embroiled in Yemen than ever, after having rejected any linkage between its regional policies and Washington’s return to the agreement.

On the negotiating front, the meetings hosted by Oman between the Houthis and the US and UN envoys have made no progress, the main reason being that the Houthis were unwilling to halt their offensive against Marib despite all the incentives.

Neither a plan to demarcate spheres of influence at the ceasefire lines in Marib upon the conclusion of a ceasefire or offers to reopen Sanaa Airport and the Hodeida Seaport could sway the Houthis from their determination to seize Marib. As they pushed further into Marib, they upped their conditions, and as they advanced into Shabwa they acquired additional means of pressure.

In the Gulf, officials began to complain that Washington was abandoning its allies by attempting to halt the war at their expense. Saudi Arabia and the UAE want an end to the war, but they feel that the US strategy has been unclear and that Washington has handed the Houthis gifts without exacting anything in return from them or from Iran.

No sooner were the Houthis removed from Washington’s terror list than they ratcheted up drone and missile attacks against Saudi oil installations and military sites. Washington’s behaviour conflicted with important US aims and interests in the region, especially maritime security in the Red Sea and alleviating Yemen’s humanitarian crisis.

In the Yemeni zero-sum game, as the Houthis gained ground and carried out increased strikes against Saudi Arabia and targeted civilians in Marib and its vicinity, Lenderking’s tours in the Gulf were reduced to stocktaking visits and opportunities to restate US positions.

On the battlefield itself, the Coalition-backed Joint Forces, an attempted merger of pro-government forces and some southern militias, failed to make significant progress. Either there was no feasible plan or the main aim was merely to block the Houthis’ advance, which also failed despite massive air support from the coalition.

Not only were the Joint Forces poorly integrated and insufficiently trained, but they sometimes also seemed to lack the will to fight. According to sources in Yemen, some of the factions in the Joint Forces acted as though the battle in the north was not their battle, but a coalition one.

The Houthi forces also encountered some cohesion and recruitment problems. As they expanded their military reach, their losses climbed, but they also found it increasingly difficult to muster troops from local tribes that had already made huge sacrifices. Some tribes began to openly rebel, to which the Houthis responded by notching up coercive tactics that included eliminating local tribal leaders.

The Houthis’ increasing recourse to drones and missiles is a reflection of their dwindling troop numbers, but their intensified drone and missile attacks against vital economic and civil targets in Saudi Arabia may also have other objectives.

Their targets have ranged from the Asir region across Yemen’s northern border to as far as Jeddah and the Saudi capital. If these strikes have reflected the Houthis’ growing offensive capacities, the Saudis, thanks to US training support, have simultaneously developed their ability to intercept hostile missiles. According to official estimates, Saudi Arabia has prevented 90 per cent of Houthi missiles and drones from reaching their targets.

A turning point came in November 2021 when the Saudis shifted from a defensive to a deterrent footing and began striking targets in the Yemeni capital such as Sanaa Airport. Riyadh stated that the airport was no longer a civilian facility since the Houthis had converted it into a military one.

The Saudi shift from reaction to action and targeting Houthi locations in the capital aims to reverse Houthi military advances by forcing the group to recoil to the centre of the country. After the Saudi bombardment of Sanaa Airport, the Houthis will not easily be able to bring it back into operation. They had long hoped to be able to pressure the coalition into lifting its blockade.

Politically, the foregoing translates into a turning point in the international mood as concerns the Houthis. The US has once again begun to add Houthi individuals and entities to its terror blacklist. It may also have given the green light to the Saudi attacks against locations in Sanaa, as long as civilian collateral damage was kept to a minimum.

Clearly, Washington realises that some effective military pressure needs to be brought to bear on the Houthis and that it only has to give the nod for others to do it. Another sign of change in Washington was the Congressional approval in December of an arms contract with Riyadh that had previously been suspended in the framework of the administration’s decision to put a hold on all arms contracts related to US weapons used in the war in Yemen.

The outgoing year brought renewed political fissuring in the south. The power-sharing agreement that Riyadh brokered between the Yemeni government and the Southern Transitional Council (STC) in November 2019 remains unimplemented. It has proved impossible to melt the ice between the two sides since the ceasefire along the front to the north of Aden.

But the STC has continued to act cordially towards the Saudi-backed government of Abd Rabbu Mansour Hadi, and it agreed to let Maeen Abdulmalik, whom Hadi appointed prime minister, to exercise his duties from within the country in Aden, rather than from Riyadh where the Hadi government has been based since the Houthi insurrection.

More recently, however, there have been reports of tensions between the prime minister and the president. To compound the fracturing in the south, Ahmed Obaid Bin Dagher, the speaker of the Yemeni Shura Council, announced an initiative to end the war and restart the Yemeni National Dialogue.

Bin Dagher said that the Arab Coalition had strayed from its aims and that Hadi lacked the means to manage the situation. Despite his political weight as a leader of the General People’s Congress Party and as the prime minister who preceded Abdulmalik, Bin Dagher’s initiative failed to gain traction, even among political allies.

While the south has not experienced full-scale war, the humanitarian situation there is grim due to a lack of resources and a deterioration in basic services, such as electricity, healthcare and hygiene. Public discontent is mounting.

Ironically, this has not lent impetus to the Southern Movement’s call for a return to the pre-unification period in Yemen. Against the backdrop of the current hardships, most southerners say they want to see prosperity return to their region before any fighting to restore the independent southern state. But prospects of any economic upturn are remote, given the state of collapse of the Yemeni economy.

For the Yemenis as a whole, the watershed that will shift the situation in favour of peace is nowhere in sight. The interplay between stakeholders at home and abroad suggests that they are too set on their different agendas to see shared interests or the possibility of building common ground.
#Joe Biden