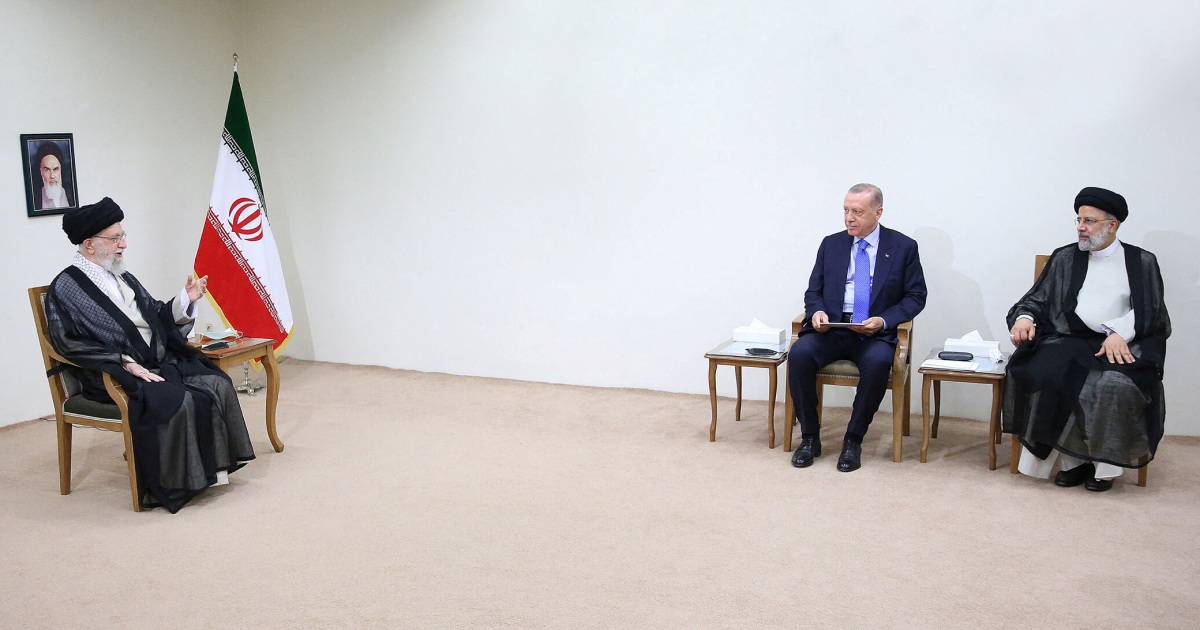 Turkish president met Iran’s Supreme Leader Khamenei and President Raisi in advance of a trilateral summit with Russian President Putin, with Ukraine and Syria on the agenda.

Iran’s Supreme Leader Ayatollah Ali Khamenei has advised Turkey’s President Recep Tayyip Erdogan not to launch a new military operation in Syria, in advance of the arrival of Russian President Vladimir Putin for a trilateral summit.

A new military operation would “be to the detriment of Syria, Turkey and the region”, Khamenei was quoted as saying on Tuesday by his website.

The supreme leader did say that Iran would “certainly cooperate” with Turkey “in fighting terrorism”, but he argued that a new offensive in Syria would actually benefit “terrorists”, who he was quoted as saying “are not limited to a certain group”, without elaborating.

Khamenei sought to reassure Erdogan by saying Iran considers the security of Turkey’s borders as it would its own, and said issues in Syria must be resolved through dialogue.

Erdogan was quoted as saying that “terrorist” groups in the region are militarily supported by Western countries like the United States and European powers.

The comments come as Erdogan has said in recent months that he will soon launch a military offensive in at least two cities in northern Syria to create a 30km (18.5 miles) “safe zone” by defeating Kurdish fighters in the region that Turkey considers “terrorists”.

He has also warned that Sweden and Finland will not have their NATO accession plans ratified by Turkey if they do not stop supporting Kurdish fighters, and refrain from extraditing individuals that Turkey considers “terrorists”.

Iran and Turkey support the Syrian government and opposition respectively, but have come together on deals that have reduced the intensity of the conflict, while also entrenching both countries in Syria.

The Turkish president arrived in the Iranian capital late on Monday as the head of a large delegation that included several ministers from his cabinet. He received an official welcome from Raisi on Tuesday at the Saadabad Palace, where meetings with heads of state take place.

Iran and Turkey signed eight agreements after the meetings concluded, one of which was reportedly a 20-year cooperation accord.

Raisi and Erdogan held a joint press conference, during which they said that they aimed to take bilateral trade to an all-time high of $30bn.

Putin is expected to arrive later on Tuesday for the trilateral summit with the two presidents in the “Astana format”, with Syria on the agenda.

The fallout from the war in Ukraine and food security are also expected to be discussed in the meetings between the leaders.

Earlier, a Russian plane landed at the Mehrabad Airport in Tehran late on Monday.

Khamenei and Erdogan also discussed the war between Azerbaijan and Armenia in 2020, during which Turkey supported the former by sending fighters and arms during the war, and helped Azerbaijan reclaim the Karabakh region from Armenia.

The supreme leader welcomed the return of the region, but cautioned that “if there is a policy to block Iran’s borders with Armenia, the Islamic Republic will oppose it since this border has been a transit link for several thousand years”.

The two also discussed Israel, Iran’s arch foe with which Turkey has been recently getting closer.

Economic ties were also discussed, with the Turkish president quoted as saying he opposes unilateral US sanctions on Iran – which were imposed after the US abandoned the 2015 nuclear deal with Iran – and will encourage Turkish companies to invest in the country.

Iran has been eyeing a long-term cooperation agreement with neighbouring Turkey for some time. The document was initially supposed to be signed during a planned Erdogan visit to Tehran in November 2021, but it did not materialise.

The two countries have been major trade partners for years, but bilateral trade has taken a serious hit in recent years due to US sanctions on Iran and the COVID-19 pandemic.

The total volume of bilateral trade peaked at $21bn in 2012, but dropped to a low of $1bn in 2020. It had rebounded to $5.5bn by the end of 2021, and the Raisi administration – which has focused on a regional diplomacy initiative – wants to significantly boost it despite US sanctions.