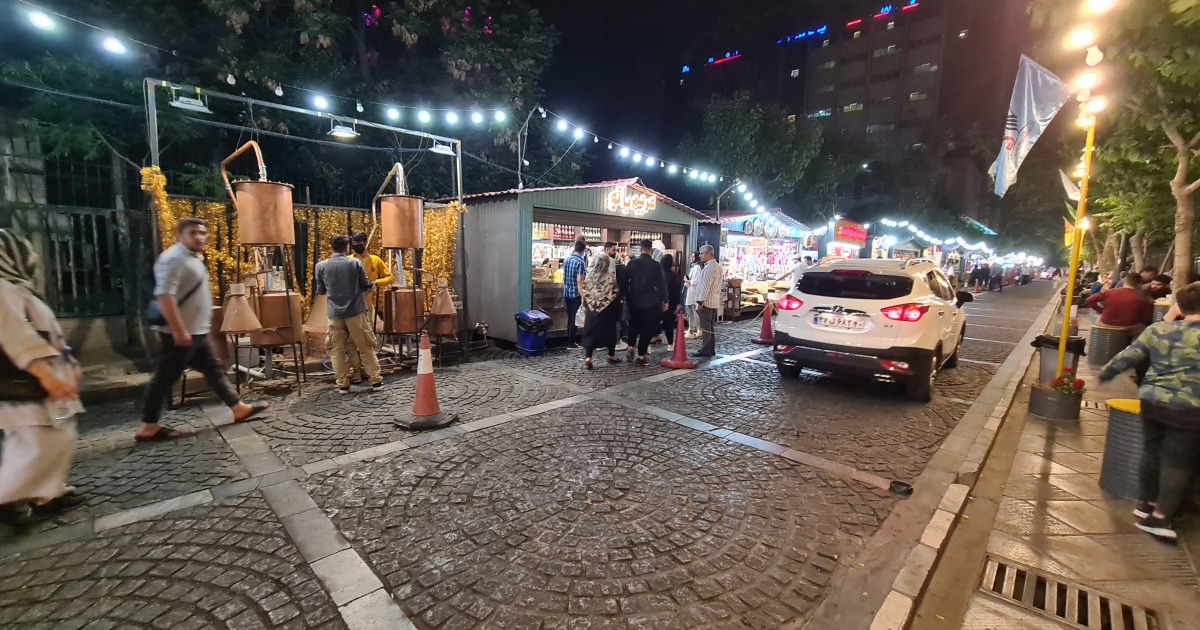 Tehran and cities across Iran undergo a number of changes during Ramadan, as streets are abuzz with people during the night.

Shouting and cheering that could be heard a block away, vuvuzelas blasting, clouds of cigarette smoke billowing in the lights.

Those are not scenes that Tehran’s Honarmandan (Artists) Park is used to seeing on a normal night. But that was the setting when the final match of the street football Ramadan Grand Cup was held on Wednesday night.

Hundreds of people – mostly young men and women, but also families with children and people walking their dogs – had gathered to watch the match of Gol Koochik (small goal), played in one of the emptied pools of the large park.

Gol Koochik is a variation of street football popular in Iran that uses a small net and a light-weight, makeshift plastic ball.

For the tournament, 20 four-man teams signed up and went head-to-head during the event that was organised for the first time during the holy Muslim month.

Women were not allowed to sign up with their own teams, as entities that are in charge of issuing permits for such events – the local municipality and law enforcement – would not greenlight it.

But men and women watched the match together, something that is still denied to them in football stadiums. 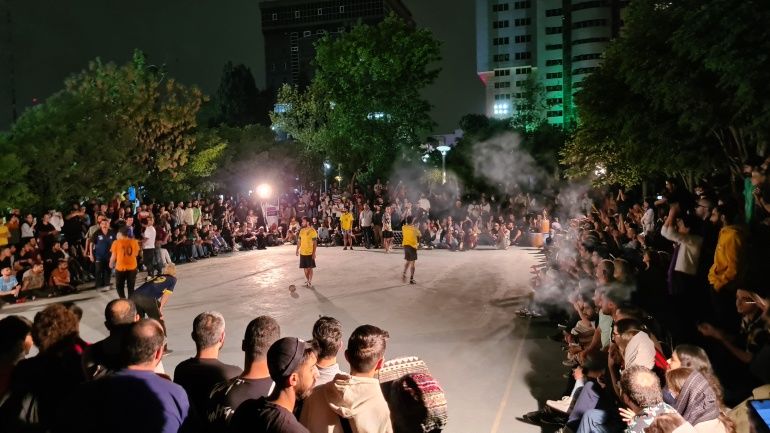 Gol Koochik is a variation of street football popular in Iran that uses a small net and a light-weight, makeshift plastic ball

The local police station had a foot in the game too and signed up two teams. Other teams were mostly comprised of people from cafés and local businesses in downtown Tehran.

“They’re our neighbours,” said Erfan Delfani, pointing to a police kiosk across the street.

The 31-year-old, who runs a small but popular omelette place next to the park, said the municipality and police helped a lot. Having grown up with Gol Koochik like many other Iranian youth, he had the idea to organise the tournament.

“At one point we were even thinking of giving up but they were great and helped us carry on,” he told Al Jazeera. “It helped too that wherever we needed to go for the permits we mentioned that two police teams are going to be in the tournament.”

Delfani did not widely advertise the tournament, instead relying on his network of local friends and associates.

But the word spread enough that many locals he did not know also signed up, and the tournament ended up having 80 players and five sponsors.

Hundreds more sat watching from the sides of the emptied pool and surrounding areas.

He said he would definitely like to organise another tournament for next year, much of it owing to his own experience as part of one of the 20 teams.

“Everything else aside, I had a lot of fun as a player. I kind of felt like Cristiano Ronaldo, really got that stadium feeling,” he said with a smile.

“But also, from one point onward the competitive football element was really emboldened. I myself really wanted to win and I think all of the other players felt the same.” 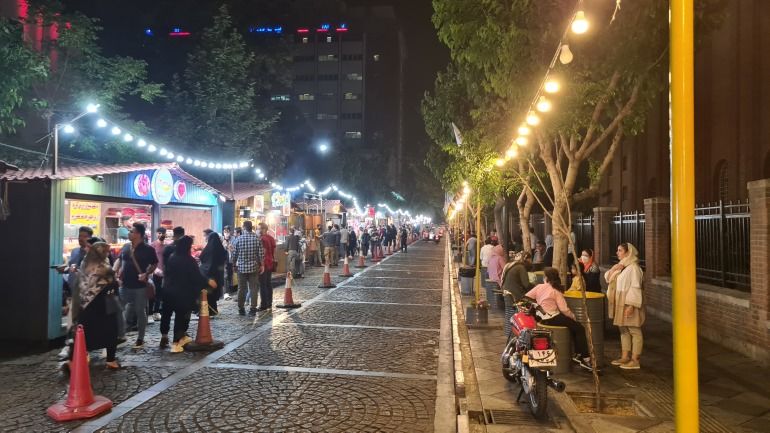 Changing hours during Ramadan, which this year ends at the beginning of May with the celebration of Eid al-Fitr, Tehran and cities across Iran undergo a number of changes

That was most evident in the four matches on the final night, where the fans trash-talked each other, the teams played intensely, red cards were shown by the referee, and several fights broke out, after one of which the match had to be halted for half an hour until the players ultimately made peace.

Changing hours during Ramadan, which this year ends at the beginning of May with the celebration of Eid al-Fitr, Tehran and cities across Iran undergo a number of changes.

Many of those revolve around religious activities as people gather for iftar ceremonies, share food, organise mourning events, and hold prayers.

But as those who observe Ramadan fast from dawn to sunset, the month also has major implications for businesses and available activities, especially the vibrant café culture in Tehran.

While food and drink businesses can legally only remain open until midnight on normal nights, during Ramadan they are allowed to operate until dawn, when fasting begins.

But restaurants and cafés are prohibited from operating before sunset and could be penalised with fines and ultimately closures if they violate the rules.

They can start offering takeaway services an hour before sunset. Offering cold food, however, is permitted at all hours. 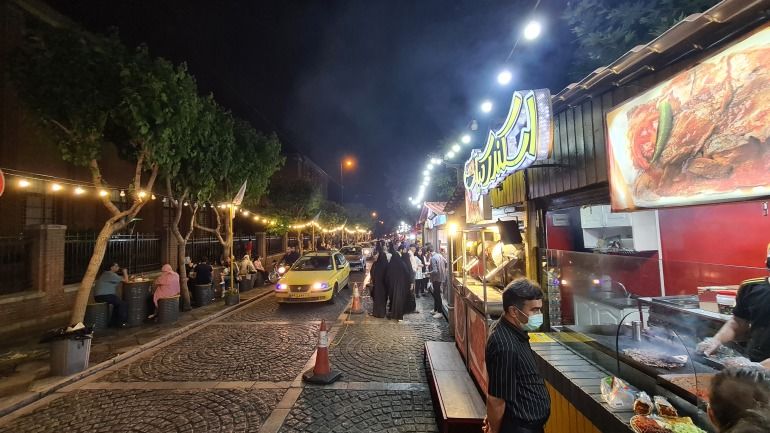 Like every other year, the country’s attorney general and police officials have warned that eating and drinking in public during Ramadan is a “crime” and those who engage in it will face legal ramifications.

So, citizens who are not fasting have little choice but to wait after iftar as well if they want to eat outside.

Tehran at night is a dynamic city with a life of its own and collective mood, said Parsa Shahrivar, who heads Peeyade, an online media outlet dedicated to exploring the metropolis.

Peeyade introduces a variety of activities and places to spend time at all hours of the day through its social media accounts and emailed offerings.

But Ramadan has changed their schedule as well. “We’re now setting our content around the time of iftar as many of our audiences are waiting for an offering around that time to get out and experience the city,” he told Al Jazeera.

There is a semblance of a nightlife in Tehran outside of Ramadan, Shahrivar said, but it is not as lively and extended as it is during the Muslim holy month.

To promote it, Peeyade had drafted a series of offerings for night-time activities in the city that it plans to publish beyond Ramadan as well.

These include strolls around some of Tehran’s 22 districts, which offer a variety of urban development and architecture styles, in addition to cultural gatherings, theatres and art galleries.

The 30 Tir Street in downtown Tehran is one of the places where there is always a crowd at night. During Ramadan, its dozens of street food vendors, colourful lights and crowd are buzzing until the early hours of morning.

Authorities’ nightlife plan, Shahrivar said, in Tehran and other cities need to develop an untampered and an “organic” way to have the desired quality for the citizens and also help businesses, which have taken a heavy blow from the combined effect of the economic downturn and the COVID-19 pandemic. “We think Tehran has the potential,” he said.

“But even as Tehran and other cities have a nightlife culture, law enforcement and monitoring entities, like city councils, mainly are not in favour of nightlife and might even consider it to run counter to a citizen’s accepted way of life in Iranian cities.”

Expanding night-time activities and extending them for additional hours has been discussed for years, but has yet to be implemented. The previous city council, for instance, last year approved an “Awake Tehran” night-life plan after years of deliberation that was rejected by the police.

“We don’t think the city can have these positive developments overnight. It’s a process that takes time but is doable,” he said. 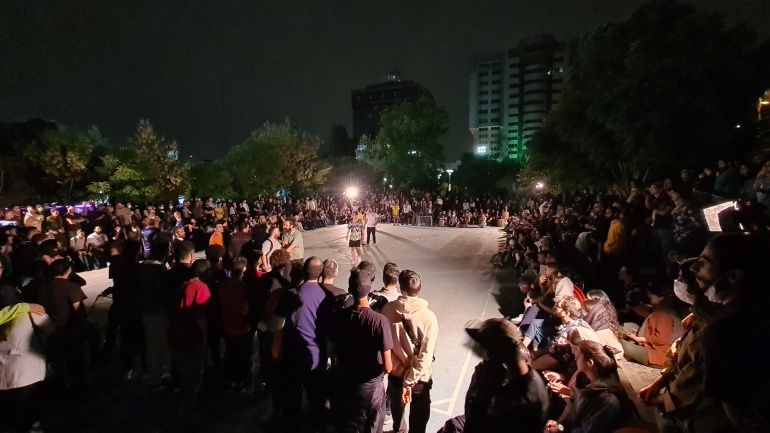 Expanding night-time activities and extending them for additional hours has been discussed for years, but has yet to be implemented