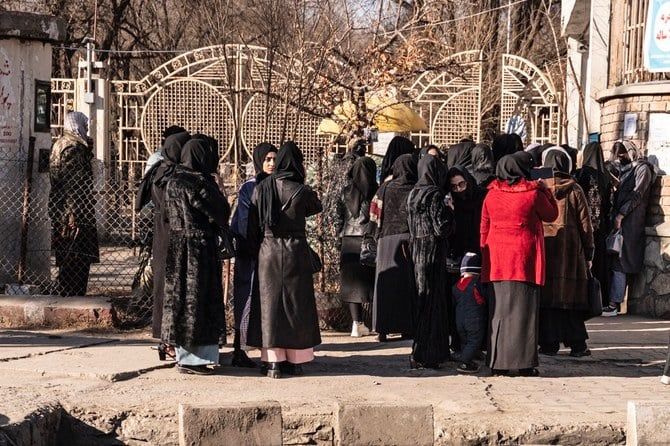 Saudi Arabia has joined calls for the Taliban to reverse its decision to impose a ban on higher education for women in Afghanistan. It came a day after the group ordered women nationwide to stop attending private and public universities until further notice.
The Kingdom’s foreign ministry expressed surprise and regret at the decision and said it was met with astonishment in all Muslim countries.

It said the decision denied Afghan women their full legal rights and the right to an education which contributes to supporting security, stability, development, and prosperity in Afghanistan.

Taliban security forces in the Afghan capital enforced the higher education ban for women by blocking their access to universities on Wednesday. Women were filmed weeping and consoling each other outside one campus in Kabul.

The Taliban leadership announced the latest restriction on the rights of women and girls in a terse statement late on Tuesday.

“You all are informed to immediately implement the mentioned order of suspending education of females until further notice,” said Neda Mohammad Nadeem, the Taliban’s minister for higher education. 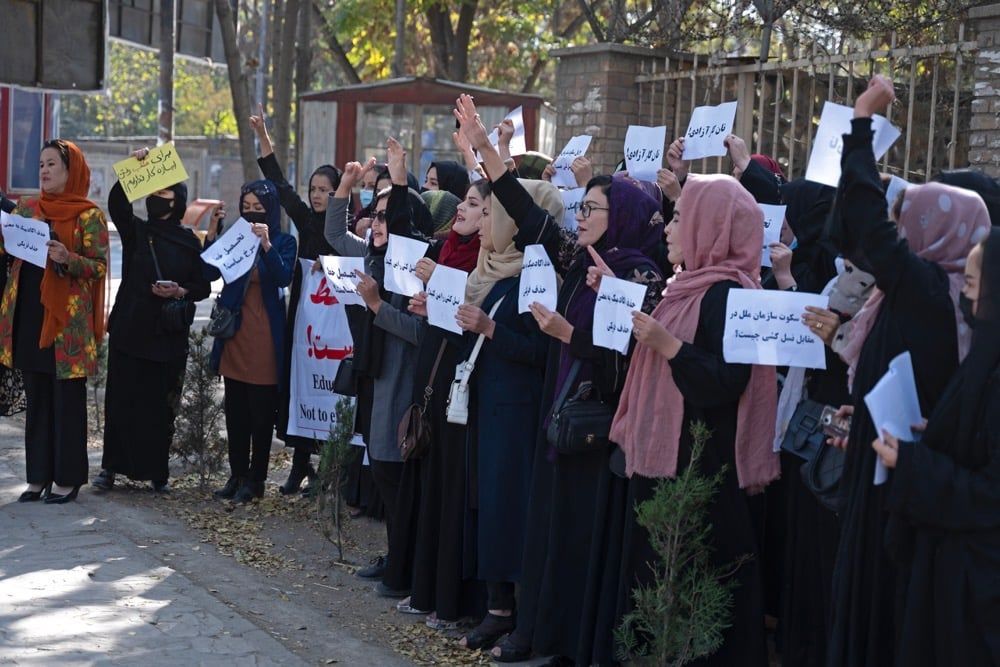 Afghan women staged protests at the university in October after female students were expelled from dormitories.

The announcement is only the latest in a series of ever-stricter restrictions on the freedoms of Afghan women, which now include mandatory face coverings and a ban on travel without a male escort.

Public frustration with the regime and its oppressive policies appears to be growing, in echoes of the current women-led protest movement in neighboring Iran, according to Afghanistan’s former national security adviser.

“I think with every passing day, the Afghan people’s frustration is growing with the Taliban’s oppression,” Hamdullah Mohib, national security adviser to the deposed Afghan government of Ashraf Ghani, told the Arab News talk show “Frankly Speaking” in October.

“If this situation continues, this oppression of the Afghan people continues, I’m certain that there will be mass mobilization in the country. It’s just a matter of when it will be.”

Governments and religious authorities were quick to denounce Tuesday’s ban. The Organization of Islamic Cooperation said it was “seriously denting the credibility of the government.”

Qatar, which has played a key role in facilitating talks between the West and the Taliban, said everyone deserves the right to education and urged Afghanistan’s rulers to review the decision “in line with the teachings of the Islamic religion.”

Although it rejected the decision, Afghanistan’s neighbor Pakistan said that engagement with the Taliban was still the best path forward.

“I still think the easiest path to our goal, despite having a lot of setbacks when it comes to women’s education and other things, is through Kabul and through the interim government,” Bilawal Bhutto Zardari, the Pakistani foreign minister, said.

The US immediately denounced the ban and warned that the Taliban regime faces further isolation from the rest of the world.

“The Taliban should expect that this decision, which is in contravention to the commitments they have made repeatedly and publicly to their own people, will carry concrete costs for them,” Ned Price, the State Department spokesman, said. 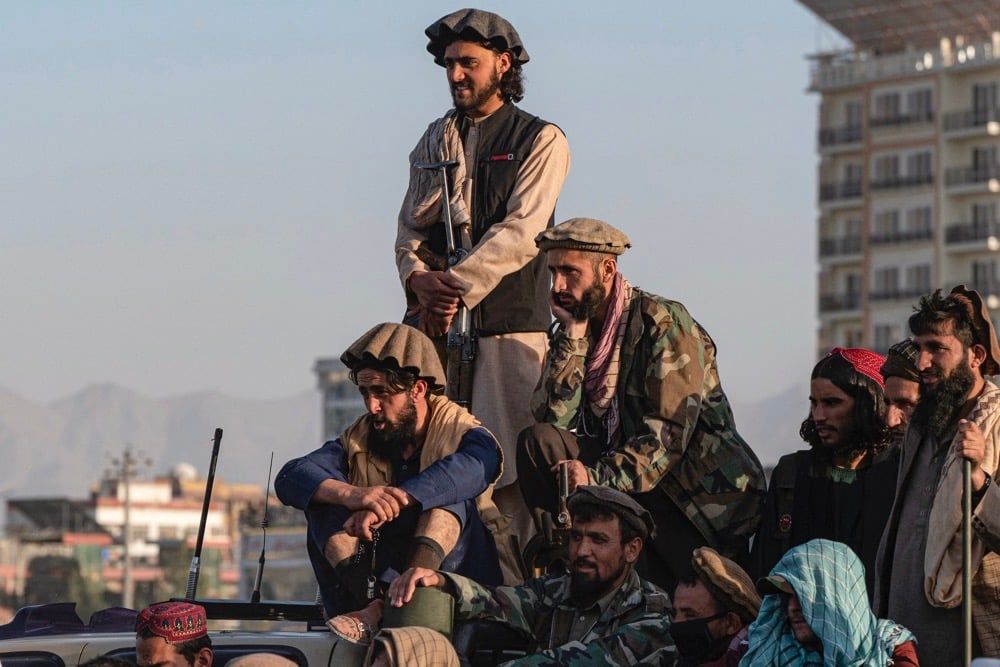 The Taliban have increasingly restricted women’s access to education.

“They have seriously, possibly even fatally, undermined one of their deepest ambitions … and that is an improvement and betterment of relations with the US and the rest of the world.

“This unacceptable stance will have significant consequences for the Taliban and will further alienate the Taliban from the international community and deny them the legitimacy they desire.”

Antonio Guterres, the UN secretary-general, was “deeply alarmed” by the ban, his spokesman Stephane Dujarric said on Tuesday.

Annalena Baerbock, the German foreign minister, said she would put the issue on the agenda of the G7 club of wealthy nations, of which Germany currently holds the presidency.

In the 20 years between the Taliban’s two reigns, girls were allowed to go to school and women were able to seek employment in all sectors, though the country remained socially conservative.

The return of the Taliban has dramatically rolled back these moderate gains. A recent survey of women inside Afghanistan, cited by the UN, found that only 4 percent of women reported always having enough food to eat, while a quarter said their income had dropped to zero. 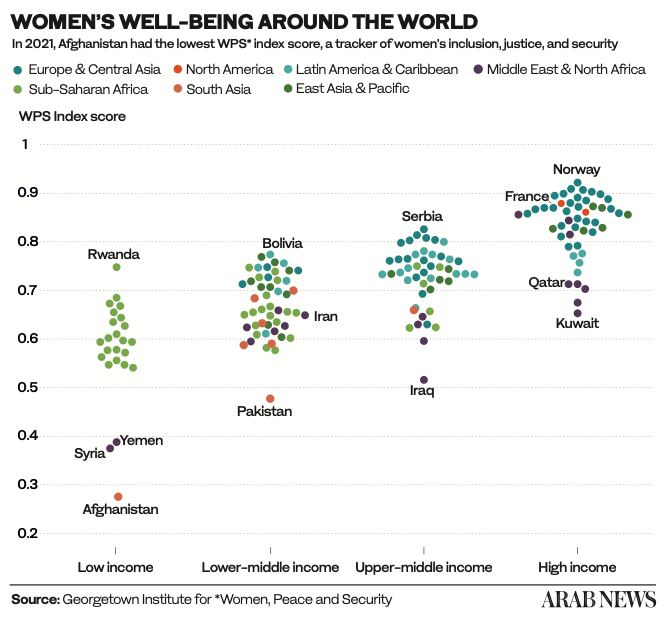 Family violence and femicide have reportedly increased, and 57 percent of Afghan women are married before the age of 19, the survey found. There are even cases of families selling their daughters and their possessions to buy food.

The Taliban’s treatment of women could also be worsening the situation for Afghanistan as a whole. Keeping women out of work costs Afghanistan up to $1 billion, or 5 percent of gross domestic product, according to the UN.

Studies have also shown that each additional year of schooling can boost a girl’s earnings as an adult by up to 20 percent with further impacts on poverty reduction, better maternal health, lower child mortality, greater HIV prevention, and reduced violence against women.

“The status of Afghan girls and women has rarely been good, even when the Taliban weren’t in power,” Michael Kugelman, deputy director of the Asia Program and senior associate for South Asia at the Wilson Center, told Arab News.

“But this rapid-fire succession of restrictions on their dress, movement, work, and education is taking them back to a point that they haven’t been in since the 1990s when the Taliban were last in control. 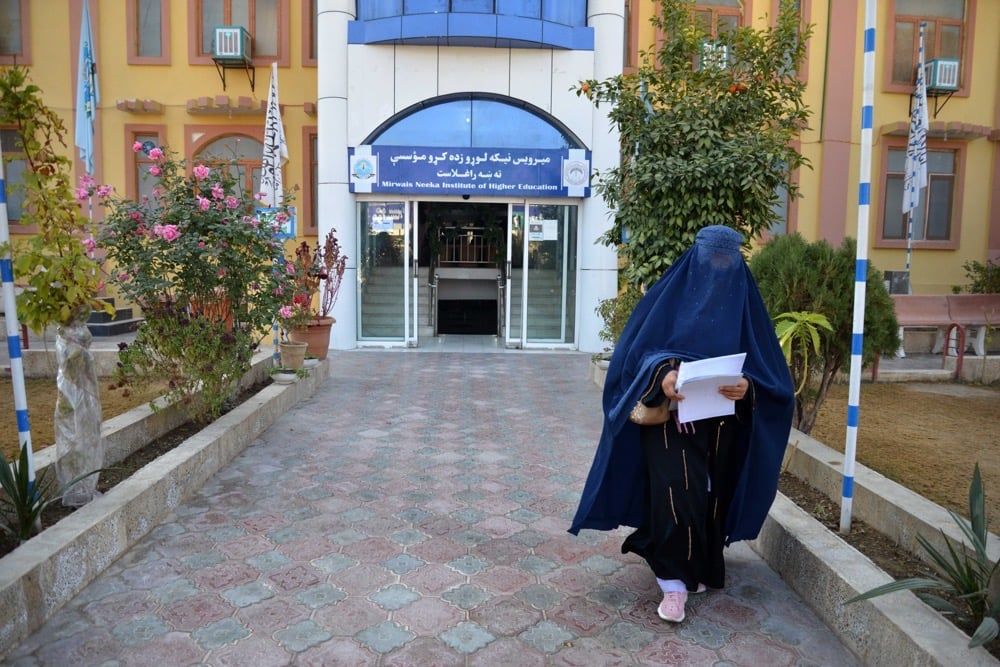 Governments and religious authorities were quick to denounce Tuesday’s ban.

“I’d argue things could get worse now than they were in the 1990s because today, unlike back then, the Taliban have control over the entire country and there are no substantive pockets of resistance. This means pushback against these types of policies will be even tougher to pull off than it was in the 1990s.”

The US beat a rushed retreat from Afghanistan in August 2021 after reaching a shaky peace deal with the Taliban. Since then, the country has been plunged into economic crisis, poverty and international isolation.

During negotiations in Doha, the Taliban sought to convince the world it had changed since its previous stint in power from 1996 to 2001, when an extreme interpretation of Islam saw women and girls barred from education and public life, and widespread suppression of free expression.

However, on returning to power, the regime reimposed many such restrictions, obliterating two decades of modest progress on women’s rights and the nation’s institutional development.

“It’s painful to say, but this decision isn’t that surprising,” said Kugelman. “For months, the Taliban have been reimposing many of their most draconian policies from the 1990s, and so this is just the latest step — an especially traumatic one for Afghan women and girls — of their ongoing strategy to impose their dreadful ideology across society.”

The Taliban had initially promised to soften its more extreme stances, saying it would honor human rights obligations, including those of women. Nevertheless, just a month after returning to power, the regime imposed gender-segregated university entrances and classrooms and imposed hijabs as part of a compulsory dress code.

Then, on March 23 this year, when girls’ secondary schools were scheduled to reopen, the Taliban abruptly rescinded the directive, barring tens of thousands of teenage girls from receiving an education. Primary school-aged girls, at least for now, are still permitted to receive schooling up until the sixth grade.

In May, the Taliban’s supreme leader Hibatullah Akhundzada ordered women to fully cover themselves, including their faces, in public, to remain at home, and to only travel between cities with a male escort. In November, a new directive banned women from entering parks, funfairs, gyms and public baths.

There have been conflicting messages from high-ranking officials concerning the education of women and girls, which could be indicative of a schism within the Taliban ranks between the hard line based in the movement’s Kandahar stronghold and the more moderate officials managing affairs from the capital.

“To be sure, plenty of Taliban leaders reject this move,” said Kugelman. “The fact that it still happened is a reflection of the ideological divides within the group as well as of the power of the Kandahar-based supreme Taliban leader and his allies. 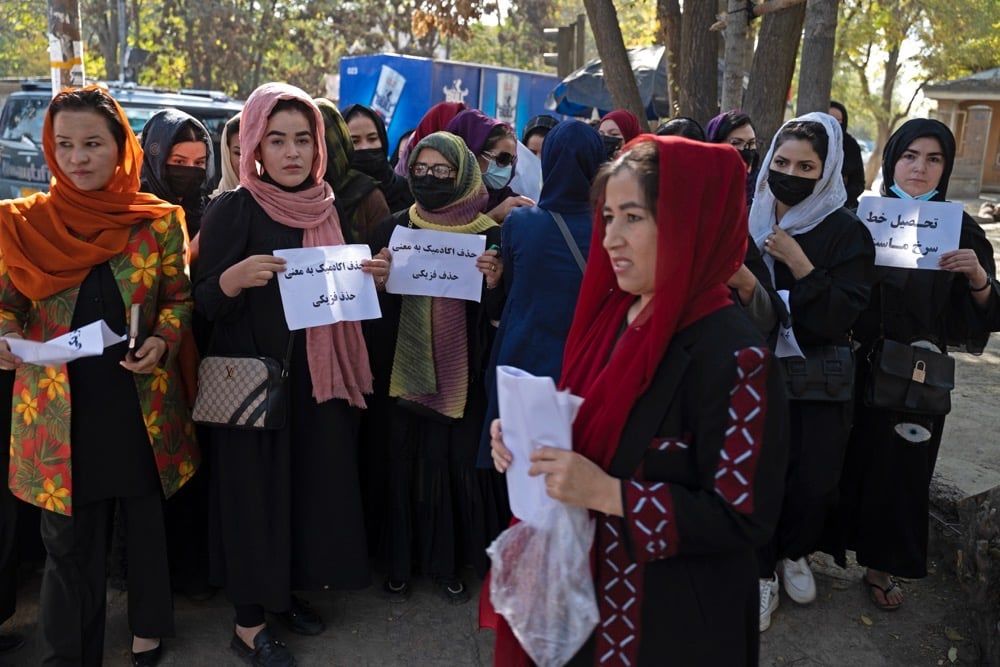 The Taliban leadership announced the latest restriction on the rights of women and girls in a terse statement late on Tuesday.

“They’re the most ideologically hard-line faction within the Taliban, and it’s here where power — including veto power to reverse moves made by leaders in Kabul — truly lies.”

Unless the Taliban shows it is willing to soften its hardline approach, particularly on matters relating to women’s rights, the regime is unlikely to gain access to billions of dollars in desperately needed aid, loans and frozen assets held by the US, International Monetary Fund and World Bank.

“The international community can and will offer its condemnations of the move and its expressions of solidarity for Afghan girls and women, and that’s the right thing to do. But at the end of the day, there’s little it can do of substance that can change this sad state of affairs,” said Kugelman.

“The Taliban aren’t about to moderate their core ideology, and the top leadership doesn’t care if this closes off opportunities for international financial assistance and formal diplomatic recognition. What matters to those calling the shots within the Taliban is that their core ideology continues to be imposed across the country.”

Although Kugelman acknowledges there is widespread opposition among Afghans to the Taliban’s mounting restrictions, he doubts civil society has the means — at least for the time being — to threaten the regime’s authority.

“To be sure, potential internal resistance is something to watch. Already we’ve seen male students walk out of their classrooms in solidarity with their female classmates, and that’s a key data point. Afghanistan may have a patriarchal society, but that doesn’t mean that the country — including its men — will just want to shrug this off,” he said.

“But the question at hand is not a lack of will to resist, but a lack of capacity. The Taliban rule with an iron fist, and unless there are protests that grow so big they can’t control them, they will likely not hesitate to curb any dissent and opposition to this move.”
#Afghanistan