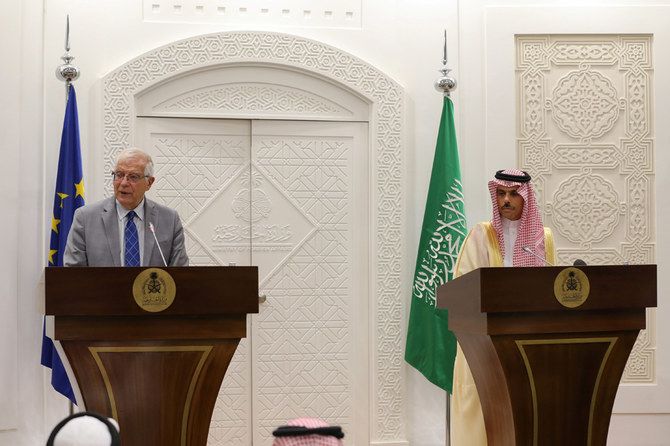 Relations between Saudi Arabia and the EU and its member states are decades old and are becoming increasingly close. The last two years have, despite the COVID-19 pandemic, seen an unprecedentedly high level of visits by European heads of state and government, foreign ministers and the EU high representative to Riyadh, along with visits by many Saudi ministers and officials to European capitals.
These contacts have brought to the fore the need to build a more strategic partnership underpinned by common interests and values.

There are many challenges and opportunities that cannot be missed: From global and regional stability to the green transition and economic cooperation through our respective transformative agendas, i.e., the Saudi Vision 2030 and the European Green Deal. We are also bound by our common values and attachment to multilateralism, the international rules-based order, social transformation and the empowerment of women and youth, giving a human-centered dimension to our cooperation. The same actually applies to the whole Gulf region and that is why the EU will, in May, release a new strategy with the Gulf. An EU-GCC ministerial meeting in Brussels last month brought together foreign ministers from both sides to discuss this.

Trade and investment will undoubtedly remain a key fundamental of our future strategy. We are the foremost provider of foreign direct investment in the region and its second-biggest trading partner. But more can be done to bring European innovation, technology and expertise to fully support Saudi Vision 2030 in, for instance, fields like tourism, culture, entertainment, energy and defense. Both sides are also committed to reexamining the possible conclusion of a free trade agreement that would solidify our relationship.

Renewable energy could be a new frontier in our partnership. The vast potential for green hydrogen that exists in the Kingdom would be a great match as the EU is poised to become the largest market and likely largest importer of green hydrogen in the world by 2030. The EU is also shifting its gas imports away from Russia, with the Gulf, particularly Saudi Arabia, possibly becoming a new partner in this regard. Realizing this potential would help both sides achieve their own climate neutrality targets.

Regional security has always been the cornerstone of our long-standing partnership, but there are more security challenges looming large, meaning we will need to step up our game. Beyond its coordination role in the yet-to-be-finalized Iran nuclear deal negotiations, the EU wants to contribute further to security and confidence-building in the wider region.

In this context, the crisis in Yemen remains a prime concern. Again this week, cross-border attacks hit Saudi Arabia in ways we systematically condemn. Attacks against infrastructure and civilians must stop immediately. The EU is committed to implementing all UN Security Council resolutions on Yemen and it stands by the Kingdom and the GCC in seeking an inclusive and durable political solution, including the recent invitation to intra-Yemeni talks in Riyadh, in coordination with the UN special envoy. In the meantime, the EU remains fully engaged in its humanitarian and development efforts. In spite of the war in Ukraine, the recent pledging conference for Yemen showed very significant support from the EU and its member states, taking their total pledged to the country to more than €371 million ($409 million).

The EU and its member states remain a global and reliable actor for peace, providing more than half of the world’s official development assistance, notably to people in conflict areas. We have long been engaged in resolving conflicts and supporting political processes in the Middle East and beyond, often working hand in hand with our partners from the Gulf. We have always had a principled position regarding conflict, calling for the respect of international law and the UN Charter and opposing the use of force — exactly as we do now in the case of the aggression against Ukraine.

The war in Ukraine, by the unspeakable suffering it is inflicting on the Ukrainian population and the way it is already damaging the international order and global economy, requires renewed efforts toward an immediate ceasefire and unimpeded humanitarian access. We welcomed the position of Saudi Arabia and the Gulf on the UN General Assembly resolution of March 2. We hope we can again count on the support of all our friends and partners for the passing in the coming days of another resolution on the humanitarian situation in Ukraine.

This will nevertheless not take us away from our global responsibilities. We want to continue to cooperate with the Kingdom on regional matters, building on our like-minded positions on many regional conflicts and our common vision of regional and maritime security. As said before, this will be at the core of the new EU strategy for the Gulf, which will this year take our partnership to the next level.
#COVID-19  #Covid