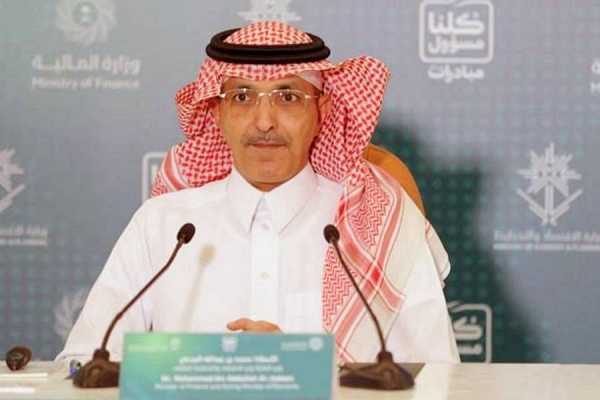 Minister of Finance Mohammed Al-Jadaan and President and Chair of the Board of Directors of the Asian Infrastructure Investment Bank (AIIB) Jin Liqun inaugurated an event on "Building Smart Cities in the COVID-19 Era: Towards Resiliance and Sustainability".
In his opening remarks at the event, which was co-organized by AIIB, the Ministry of Finance and the Ministry of Investment, Al-Jadaan addressed the challenges and opportunities related to smart cities, and highlighted the experience of Saudi Arabia in this field.

He underscored the importance of following a more inclusive approach towards climate change, such as the Circular Carbon Economy (CCE) Framework and encouraged AIIB to utilize the CCE Framework, which was fully endorsed by the G20 Leaders in Riyadh's Summit in 2020.

Al-Jadaan added that during its G20 Presidency, the Kingdom introduced the G20 Infrastructure Technology Agenda to advance the use of technology in infrastructure to promote the high quality infrastructure investments for the delivery of better social, economic, and environmental outcomes.

Al-Jadaan, who is the governor of Saudi Arabia at AIIB since 2016, confirmed that Saudi Arabia is keenly aware of the importance of digital infrastructure, noting that the Saudi government has taken many initiatives under Vision 2030 to support smart cities.

He indicated that “new technologies will continue to play a prominent role in transforming and reshaping the world in a profound way and, at the same time, we need to keep an eye on its unintended consequences on inequality, and avoid widening the “digital divide" between and within countries.

With regards to the Saudi experience in this field, Al-Jadaan stated, “I am pleased that Saudi Arabia was ranked second globally among the G20 countries in the Digital Competitiveness Report for the year 2021. The Kingdom has actively invested in its digital infrastructure under Vision 2030, including by launching the Line city in NEOM."

AIIB President Liqun explained, “the global pandemic has had tremendous impact on our way of governing cities and providing health care services and energy consumption.

“However, smart cities in the COVID-19 era will adopt modern technologies to realize e-governance, provide accessible tele-healthcare, green energy and transport, all leading toward to resilient and sustainable urban environment in the future."

The event, which discussed the role of Smart Cities in the COVID-19 era, with a focus on resiliance and sustainability, was attended by: Najeeb Haider, director general of AIIB's banking department, Faisal Hamza, deputy of investment attraction and development, at the Ministry of Investment, Gregory Soroblane, executive director of The Red Sea Development Company, and Eng. Haitham Al-Kehily, technology and digital platforms advisor at the Royal Commission for Riyadh City, while Osama Al-Hanaki, director for policy design and advocacy at King Khalid Foundation, moderated the talk.

It is noteworthy that the Kingdom is a founding member of the Asian Infrastructure Investment Bank, which began its work in 2016.

This is in addition to strengthening regional cooperation and partnership in addressing development challenges by working in a framework of close cooperation with other bilateral and multilateral development institutions.
#COVID-19  #Covid