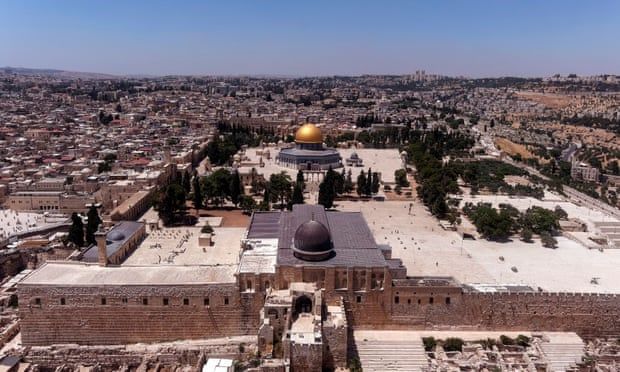 A US-based pro-Israel group has launched a campaign against the Albanese government’s decision to revoke recognition of West Jerusalem as the capital – and now plans to expand its operations in Australia.

But the campaign has sparked accusations that the Los Angeles-based organisation was “trying to trick the Australian government into thinking that the only way to be pro-Israel was to follow the Trump playbook”.

StandWithUs placed a half-page advertisement in the Weekend Australian on Saturday saying: “Jerusalem was already the capital of the Jewish people when Rome did not exist, the Mayan city of Chichen Itza did not exist [and] Australia’s only inhabitants were the Indigenous people on the land.”

It directed readers to a web form where they could submit an email to the prime minister, Anthony Albanese, and the foreign affairs minister, Penny Wong, urging them to reconsider their “unjustified and poorly executed decision to reverse the Australian government’s recognition of West Jerusalem as Israel’s capital”.

“Please restore the government’s commitment to truth by recognising that Jerusalem is the capital of Israel,” the form letter said.

StandWithUs has not disclosed how many people have used the form to submit letters so far.

But the organisation said it had placed the advertisement “as an educational strategy to remind people of the deep connection that Jews have with Jerusalem and of course, Israel”.

Roz Rothstein, the co-founder and chief executive of StandWithUs, said the organisation had run programs in Australia for more than a decade but was now “planning to officially open an Australian office, just as we recently opened our new offices in South Africa and the Netherlands”.

“A StandWithUs educator is en route to Australia to speak to a variety of groups in Sydney, Melbourne and Perth,” Rothstein said.

StandWithUs, founded in 2001, states that its goals are to “stand up for Israel” and fight antisemitism. But Rothstein has attracted criticism in the past for urging supporters of Israel to back its government’s policies. She was quoted as saying in 2011 that supporting Israel means “respect[ing] the elected government of Israel”.

Asked whether the new campaign was seeking to reinstate Australia’s recognition of West Jerusalem or instead to recognise the entirety of Jerusalem as the capital of Israel, Rothstein said: “We believe restricting recognition to only the western part of the city makes little sense.

“This is first and foremost because the Western Wall and other Jewish holy sites are located in eastern Jerusalem, and will stay under Israeli sovereignty in any realistic and just peace agreement.

“While it is up to Israelis and Palestinians to negotiate that agreement, the Australian government should recognise the basic reality that Jerusalem is and will remain Israel’s capital.”

The campaign has drawn criticism from the New Israel Fund Australia, which promotes a vision of Israel as both the Jewish homeland and a democracy for all its citizens.

“StandWithUs is trying to trick the Australian government into thinking that the only way to be pro-Israel is to follow the Trump playbook,” said Liam Getreu, the executive director of the New Israel Fund Australia.

Getreu said there was “a reason not a single country recognised Israel’s de facto annexation of a ‘united’ Jerusalem in 1967 and that only three countries followed Trump’s embassy move in 2017 – it’s just bad foreign policy”.

The debate follows the decision by Albanese’s cabinet about two weeks ago to reverse the former prime minister Scott Morrison’s decision in 2018 to recognise West Jerusalem as the capital of Israel.

While Labor had promised in 2018 to undo the Morrison-era move on the basis it was a “final status” issue for negotiations, the cabinet decision ignited tensions with the Israeli government, which summoned the Australian ambassador, Paul Griffiths, to protest the “hasty” move.

The assistant minister for foreign affairs, Tim Watts, said in a speech to the Zionist Federation of Australia on Saturday that Australia’s commitment to Israel had “not wavered in the slightest”.

Jeremy Leibler, president of the Zionist Federation of Australia, thanked Watts for “taking the time to listen genuinely to our concerns” but maintained that the Australian Jewish community “was extremely disappointed by the Albanese government’s policy reversal”.

The paper said the trip – which coincided with Tuesday’s Israeli elections – was organised by the Australian/Israel and Jewish Affairs Council.

Ley’s and Leeser’s offices did not respond to requests for comment. The council declined to say whether any other federal politicians were part of the delegation, saying any participants were likely to comment only after their return to Australia.

The Australia Palestine Advocacy Network has previously welcomed the Albanese government’s decision, arguing Morrison’s 2018 stance was a “flawed political stunt” and “should never have happened in the first place”.

Jerusalem’s Old City includes some of the holiest sites to Jews, Muslims and Christians.