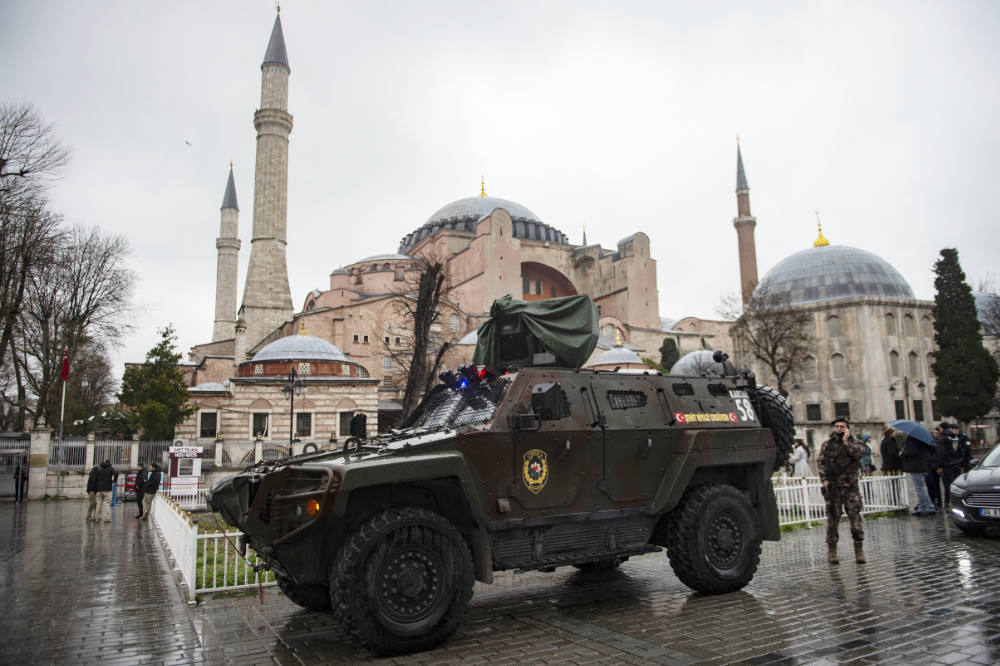 Turkey captures the new leader of Daesh in Istanbul raid

Turkey captured the new leader of the militant group Daesh in a raid in Istanbul, local media claimed on Thursday.
Turkish dissident news website Oda TV claimed Abu Al-Hasan Al-Hashimi Al-Qurayshi was caught in an operation directed by Istanbul’s police chief, Zafer Aktas, after days of surveillance and preparation, though no official statement has yet been made.

According to Turkish press reports, President Recep Tayyip Erdogan is expected to unveil details of the operation in the coming days.

The previous leader of Daesh, Abu Ibrahim Al-Hashimi Al-Qurayshi, was killed in northwestern Syria on Feb. 3 by US forces.

In recent months, Turkish police have systematically carried out raids against Daesh cells across the country. Earlier in May, a prospective suicide bomber allegedly linked to the group was arrested in Urfa on the Syrian border, while three more people were detained the same week in Bursa.

On Thursday, another Daesh member was shot dead by police while allegedly trying to blow himself up in front of the police department in the southeastern province of Gaziantep.

Experts note that this most recent operation could be used as leverage by Ankara to up the ante against its NATO allies in order to show its commitment to counterterrorism efforts.

Soner Cagaptay, director of the Turkish Research Program at the Washington Institute, thinks that the timing of the operation in Istanbul is telling.

“It is not a coincidence that Ankara allegedly captured the top figure of Daesh amid ongoing debates about NATO enlargement and Turkey’s accusations against some Nordic countries about their alleged support of terror groups,” he told Arab News.

According to Cagaptay, Turkey is aligning with Western security priorities and trying to remind its NATO allies that it helps them against common terror threats.

Turkey is also part of the large international coalition of nations that has spent years fighting Daesh.

During the latest ministerial meeting of the coalition in the Moroccan city of Marrakesh, Turkey’s Foreign Minister Mevlut Cavusoglu also brought up Turkey’s own concerns, saying the fight against Daesh cannot be won with the help of other terror groups.

This was widely interpreted as a reference to Kurdish groups such as the People’s Protection Forces, or YPG, which has received some support from Sweden, which is applying to join NATO — a move Turkey is, as a result, opposing.

“This latest operation in Istanbul is instrumental for Ankara to urge the Western alliance that it is now their turn to understand Turkey’s domestic terrorism concerns that cover not only Daesh but also other terror groups including the Kurdistan Workers’ Party — PKK — and its Syrian offshoot YPG,” Cagaptay said.

The reported capture of Al-Qurayshi also coincided with the gathering of the National Security Council, chaired by Erdogan, on Thursday, where details of Turkey’s impending operation against YPG militants in northern Syria was discussed.

“The operations currently carried out, or to be carried out, in order to clear our southern borders from the threat of terrorism, do not in any way target the territorial integrity and sovereignty of our neighbors and they pose a necessity for our national security needs,” the meeting’s final communique said.

Ankara believes it faces security threats from Manbij, Ain Al-Arab and the Tal Rifat district of Aleppo, which it considers bases for hostile groups.

Erdogan announced on Monday that he would launch the offensive into northern Syria to push back the YPG, and secure a 30 kilometer safe zone to settle Syrian refugees currently living in Turkey.

However, a potential military operation — after three previous offensives — does not seem to have received approval from the US for the time being.

“We recognize Turkey’s legitimate security concerns on Turkey’s southern border, but any new offensive would further undermine regional stability and put at risk US forces and the coalition’s campaign against ISIS (Daesh),” US State Department spokesperson Ned Price said on May 24 in a press briefing.

Colin P. Clarke, director of research at The Soufan Group, thinks that anti-Daesh operations in Turkey can have a significant impact on the group’s presence in the region.

“Even when Daesh still held its territorial ‘caliphate,’ it was dispatching operatives to Turkey to lay the groundwork for financial and logistical support networks. Those networks have paid off for Daesh, as it’s allowed the leadership consistent access to money,” he told Arab News.

According to Clarke, the Turkish government should be incentivized to crack down even harder on Daesh, but there is some concern about a backlash, including terror attacks inside Turkey.

Daesh members have carried out a number of attacks across the country, including at least 10 suicide bombings, seven bombings, and four armed attacks, which have killed 315 people and injured hundreds of others to date.