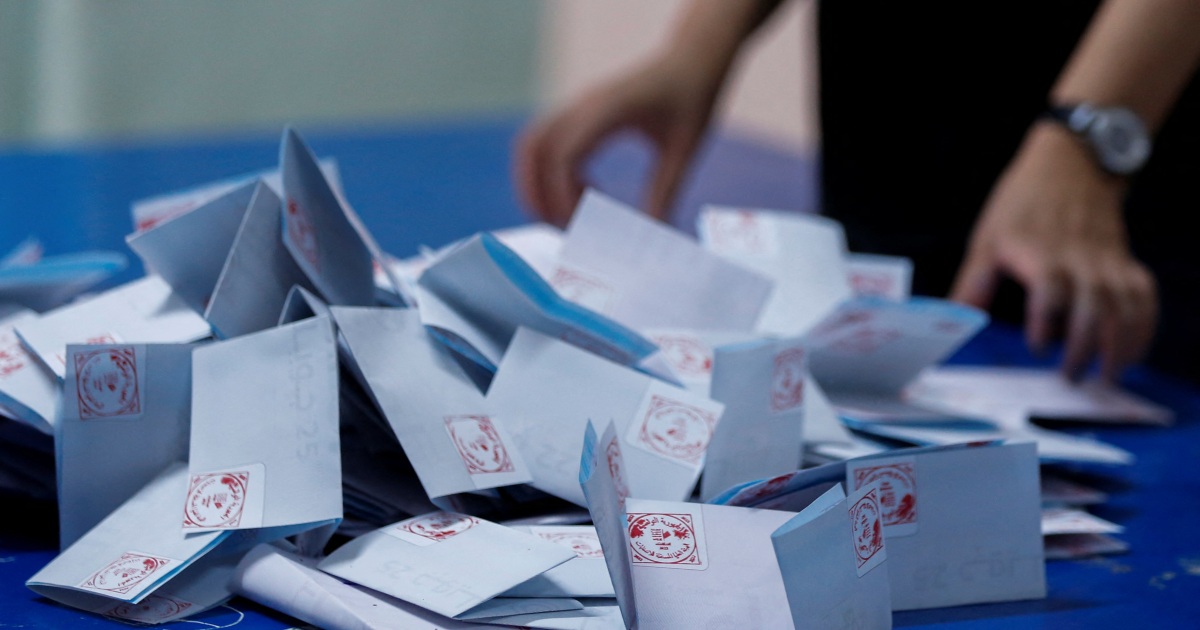 Amid complaints over data management, election authority maintains the results of constitutional referendum are valid.

More than a week after Tunisians backed a new constitution proposed by President Kais Saied, civil society groups are demanding the election authority publish the raw vote data to see if the process was valid – and some are even asking for a recount.

According to the Tunisian Independent High Authority for Elections (ISIE), some 2.93 million voters, of the 9.2 million registered, took part in the July 25 vote, with 92 percent of those participating voting “Yes”.

The low turnout of 31 percent came amid a boycott campaign from the opposition, which says the new constitution could lead Tunisia back to one-man rule, an allegation Saied denies.

There was no minimum level of participation set for the referendum, so the constitution, which will change Tunisia from its current hybrid parliamentary democracy to one where the president has sweeping powers, will be adopted.

While civil society observers do not dispute the winning “Yes” vote, nor do they accuse the ISIE of fraud, they have expressed concerns about vote data management. They want polling station data to be published in an easily accessible format and point out serious errors in some governorate results published on the day after the referendum, which were rectified by the ISIE on August 2.

Meanwhile, “No” campaign leaders and the political party Afek Tounes are demanding the whole result be cancelled, claiming the referendum process was unconstitutional and that the “No” campaign was blocked from holding campaign events.

Anti-corruption organisation I Watch accused ISIE’s staff of “being incompetent and lacking integrity”.

Slim Bouzid, of the independent vote observation association Mourakiboun, said I Watch had asked for a recount, but his organisation had requested “the detailed data in spreadsheet, so that we can verify whether these were, in fact, errors or something else,” said Bouzid, shying away from defining what he was hinting at, when pressed by Al Jazeera.

But ISIE President Farouk Bouasker has hit back at those who, he said, were accusing the authority of fraud and of falsifying the election results, pledging legal action against them.

Bouasker also told a news conference on Tuesday that the three legal cases filed against ISIE did not concern the results. “This shows the referendum results are sound,” he said in Tunis.

The complaints against ISIE will be heard on Friday.

Since the writing of Tunisia’s constitution in 2014, the independent election authority has successfully organised three general elections and received praise from observers for running free and fair polls in a competent manner.

But in May, Saied replaced the ISIE’s executive committee, giving the newly reformed body just two months to organise the referendum, including recruiting and training 80,000 new polling station workers.

Bouzid said the whole referendum process was problematic, including the handling of personal data without consent.

Before the vote, ISIE hailed the registration of some 2.26 million new voters, but Bouzid said “the voluntary recruiting of new voters failed due to lack of equipment and poor strategy, so [ISIE] switched to automatic registration”.

According to Bouzid, “the ideal number of voters per polling station” to ensure an error-free count is 600. But before the referendum, the number of polling stations was cut from 14,700 to 11,762, which led to a maximum of 1,000 voters registered for each centre, which Bouzid said could have led to vote-counting errors.

Meanwhile, political scientist Monica Marks, assistant professor of Arabic Cross Roads Studies at New York University Abu Dhabi, who has been interviewing all parties involved in the referendum process, also pointed out that the ISIE had not released the vote data in a file format that observers could access and analyse.

“We do not have any independent, fully transparent evidence to verify ISIE’s figures,” Marks said.

When contacted by Al Jazeera, ISIE maintained that no errors were made in the counting of the ballots.

The referendum also took place with fewer observers than in previous electoral processes. Bouzid said that in the past, ISIE would authorise some 15,000 independent observers – but this time there were just “6,000 observer accreditations, of which half were accredited to Mourakiboun”.

Mrabti Said, an observer from the Chahed Observatory for Election Monitoring, told Al Jazeera that he and his colleagues had been refused entry to polling stations because they had not been issued the correct accreditation. “ISIE didn’t buy enough cards to print all the passes requested by independent and international observers,” he said.

Said, who had observed every election since the 2011 revolution with the Chahed organisation, said he was shocked by incidents of police heavy-handedness. “Police agents attacked one of our observers … [in the] suburb of Djebel Jelloud. [They] arrested and took him to the police station there.”

Marks added: “We do not have and we never will have a full list of violations in this referendum, because observers were only present in a small fraction of locations and because ISIE workers were so haphazardly recruited and trained.”