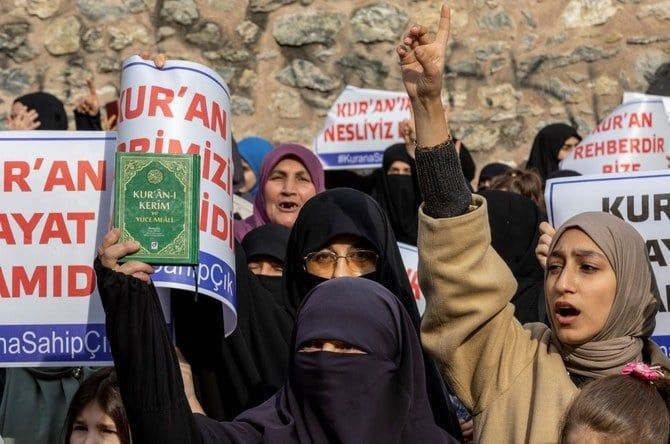 Sweden’s bid for NATO membership is facing a dead end, according to analysts.
A protest by Swedish-Danish right-wing extremist leader Rasmus Paludan in front of the Turkish Embassy in Stockholm has further strained relations.

Following the demonstration, in which Paludan burnt a copy of the Holy Qur’an, eyes are now focused on potential steps Ankara might take to torpedo NATO’s expansion to Nordic countries.

The Turkish Ministry of Foreign Affairs condemned the Qur’an burning, describing it as a “vile act,” and criticized the Swedish government’s decision to allow the protest as “completely unacceptable.”

In Sweden, the move is tolerated within the parameters of freedom of expression.

Amid growing diplomatic tension between the two countries, experts believe that Turkiye is unlikely to vote in favor of Sweden’s accession to NATO before the critical domestic elections — both parliamentary and presidential — on May 14.

There is also no guarantee that the next president will enjoy a majority in the parliament following elections, which may make ratification even more complicated and further leave the alliance in uncharted waters following Russia’s invasion of Ukraine.

Devlet Bahceli, head of the nationalist MHP party, the main ally of the ruling government in Turkiye, promised that Sweden’s NATO membership would not be approved by the parliament.

Following the protest, Ankara postponed the planned visit of Swedish Defense Minister Pal Jonson on Jan. 27, although the meeting was expected to address Turkiye’s objections to the Swedish accession to the alliance.

Kalin tweeted: “Allowing this action despite all our warnings encourages hate crimes and Islamophobia.”

In early January, he also said that Ankara is not in a position to approve Sweden’s NATO accession until all of its concerns have been met.

As part of a long-running diplomatic tussle, Turkiye initially blocked Sweden’s NATO accession in order to push Stockholm toward meeting some political demands, such as the extradition of several persons sought by Turkish authorities on terrorism charges.

After decades of military non-alignment, Sweden applied to join NATO in May and took steps to toughen its anti-terrorism laws to lift the Turkish veto.

It also deported two members of the outlawed Kurdistan Workers’ Party, or PKK, to Turkiye.

Finland and Sweden signed a trilateral memorandum with Turkiye last year in a bid to overcome Ankara’s objections to their membership in NATO.

Swedish Prime Minister Ulf Kristersson recently said that his country, which insists that the courts have the final say over the extraditions, has already fulfilled its part of the memorandum but that Turkiye has further demands Sweden cannot meet, including the extradition of 130 people.

Under NATO rules, all 30 members must unanimously agree before a new state can join the alliance.

“Behind the scenes, the actual talks were going well before the new year. Sweden has made significant progress on all items in the trilateral memorandum signed in June,” Paul Levin, director at Stockholm University Institute for Turkish Studies, told Arab News.

“Now, however, the political logic of campaign season in Turkiye, combined with far-left and far-right groups in Sweden competing to insult the easily insulted Turkish president, has thrown the process into a tailspin,” he added.

Last week, controversial footage was released by a Kurdish group in Sweden showing an effigy of Turkish President Recep Tayyip Erdogan being hanged in Stockholm and people calling him a “dictator.”

Ankara accuses Stockholm of sheltering individuals affiliated with the PKK and its allies in northern Syria and Iraq. Sweden has pledged to distance itself from all Kurdish groups considered terrorists by Turkiye in order to gain Ankara’s support for its NATO bid.

“I suspect Stockholm will try to hunker down and avoid exacerbating the situation while continuing to implement the memorandum,” Levin said.

“I expect nothing positive from Turkiye on ratification before the elections, but if Erdogan wins, it may take much longer than even that,” he added.

According to Soner Cagaptay, director of the Turkish program at the Washington Institute, together with all other similar provocations in the recent past, the latest demonstration will all but bury Sweden’s hopes to join NATO before the Turkish elections.

“Erdogan has already instrumentalized this accession bid, while Turkiye has legitimate security concerns regarding Sweden’s lax attitude toward the PKK and its affiliates,” he told Arab News.

Cagaptay said any concessions from Sweden would help Erdogan boost his popularity.

Cagaptay also believes that Erdogan has decided to leverage Sweden’s accession with NATO allies to buy tacit political support during his campaign season.

“He knows that NATO allies will moderate any criticism that they have toward him during this electoral process,” he said.

“Until that moment, he will use this accession bid as sort of sword of Damocles to keep them quiet regarding his policies during the election campaign,” said the director.

“It takes two to tango. Erdogan, who is running for re-election, has a helping hand both from Sweden’s far right and far left, which are not interested in NATO accession at all,” Cagaptay said.

“Saudi Arabia calls for spreading the values of dialogue, tolerance, and coexistence, and rejects hatred and extremism,” the Saudi Foreign Ministry said in a statement.

As retaliation, some groups burned the Swedish flag in front of the Swedish Consulate in Istanbul.