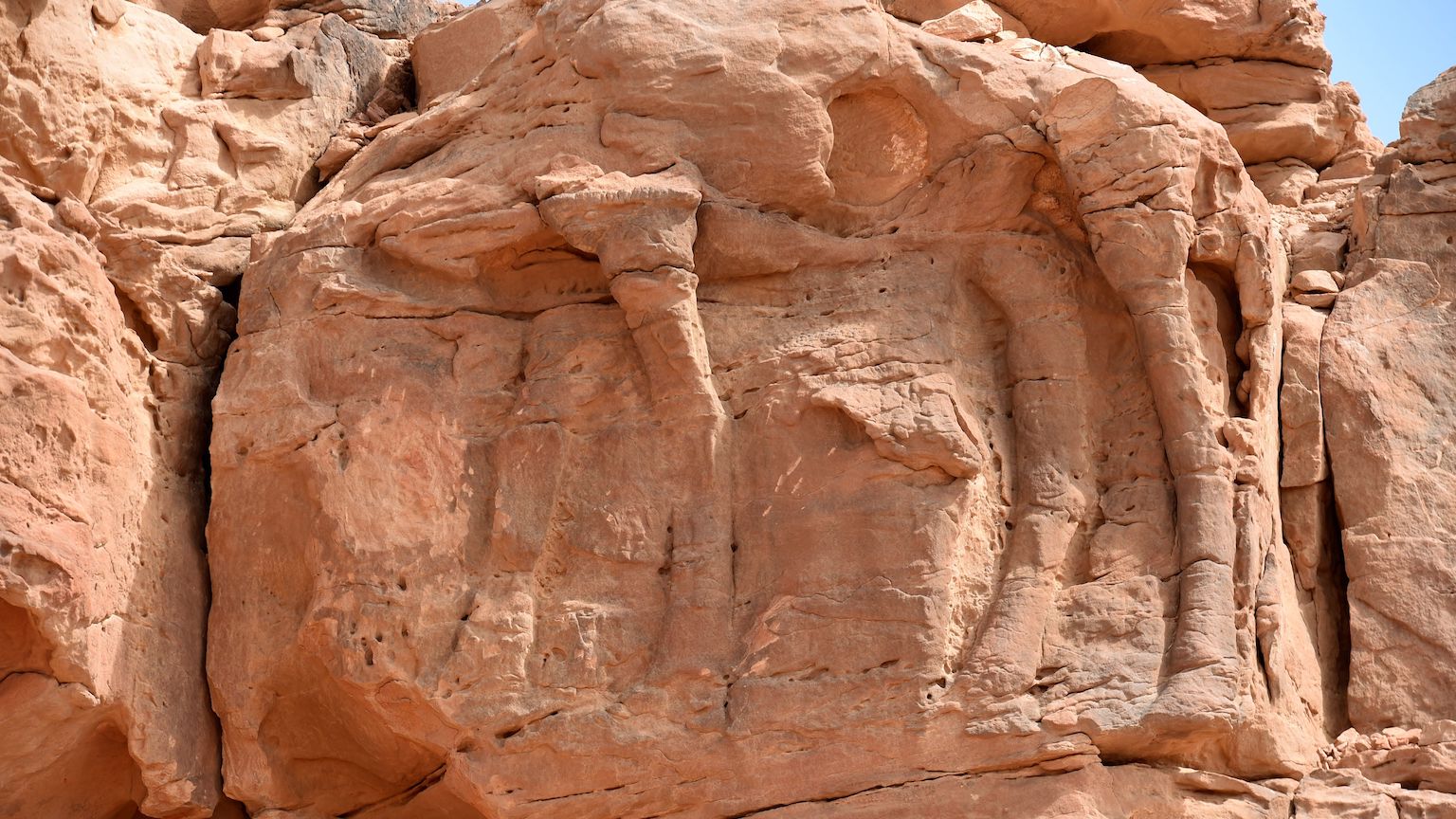 Saudi Arabian stone camels are older than the Pyramids and Stonehenge

The stone camel sculptures of Saudi Arabia, seven in total and originally uncovered back in 2018, far predate more famous monuments.

The ancient rock sculptures of Saudi Arabia serve as reminders of a distant time when the desert region we know today consisted mostly of lakes and grasslands. This lush ecosystem, sustained by the excessive rainfall it received during a humid spell in the Holocene epoch, became the home of both our human ancestors and the wildlife whose likenesses they carved into the cliffsides.

This particular story in Arabia’s prehistory begins in 2018, when archeologists discovered a series of giant stone camel sculptures in the northwestern province of Al-Jawf. Unable to detect any organic matter to sample and study, the archaeologists based their estimates on similar reliefs found in the city of Petra. As a result, these ancient stone camels were believed to be around 2,000 years old.

A more recent study suggests something very different. Studying such things as erosion patterns, tool marks, and animal bones excavated at a nearby site, a team of European and Middle Eastern researchers concluded the camel sculptures were much older than previously thought. Their research, published in the Journal of Archeological Science earlier this month, claims the sculptures could be anywhere between 7,000 to 8,000 years old.

Some earlier studies had similar suspicions but could not provide the evidence necessary to confirm them. Last year, Guillaume Charloux, the French archaeologist who originally found the sculptures in Al-Jawf, suggested they could be part of an older and more widespread tradition of Neolithic rock art characterized by naturalistic and life-size depictions of camels. The only difference here was that those from Al-Jawf were a little more three-dimensional.

Intrigued by the idea that the stone camels might constitute an artistic breakthrough, the aforementioned team of archaeologists — once again headed by Charloux, alongside archeologist Maria Guagnin — tried to see if they could assess their age not through stylistic comparisons but a “technological study” that yielded absolute results, using a variety of measurement tools to determine them.

Having been exposed to the elements for thousands of years, the sculptures were in an understandably poor condition, making them difficult to study. Fortunately, the archaeologists were able to use optically stimulated luminescence (OSL) dating to retrace the erosion process back to a point in time when the camels were still more or less untouched. In order to run this analysis, loads and loads of highly detailed images had to be produced. The sculptures were photographed multiple times a day, as the position of the sun greatly affects visibility. The archaeologists also photographed the sculptures at night using artificial light, giving them additional data to work with.

During this stage, the research project took an unexpected turn, as careful assessment of the sculptures and the rock from which they had been carved led to the discovery of not one or two but seven other life-sized animal reliefs that were so faded that they could not be spotted with the naked eye. Looking over piles of rubble that had been shoved aside by bulldozers, archaeologists also uncovered two small-scale reliefs and two fragmented ones.

Wanting to be as sure as possible, the archaeologists used a number of other measurement tools to test their hypothesis. Aside from OSL, they also used X-ray fluorescence spectrometry to test the sculptures for a degradable chemical called manganese. Lithics found at nearby sites were dated as well, as were a number of bones. Normally, skeletons are dated based on the amount of bone collagen they contain. However, because collagen is poorly preserved in desert environments, the archaeologists opted to test for the minerals bioapatite and carbonate hydroxyapatite instead. The bounds were ultimately set at 7,000 and 8,000 years.

Let’s meet at the stone camels

Aside from determining the age of the sculptures, the measurements also taught the archaeologists about the people that carved them and the social purposes the sculptures might have served. Analyzing the site in-person, experts concluded that each individual camel must have taken between 10 and 15 days to construct. Given the size of the sculptures — life-size or larger in most cases — it seems they could not have been completed without scaffolding. The sheer scope of this creative operation — from the time it took to the kind of tools that were involved — suggests these sculptures must have served an important goal.

This idea is supported by the design of the sculptures themselves, which seem to tell a story that is particular to the community that created them. Said a spokesperson for the Max Planck Institute where Guagnin serves as a faculty member, “The weight gain and references to mating season in the camel reliefs suggests they may be symbolically connected to the yearly cycle of wet and dry seasons to which these biological changes are linked.”

Though the sculptures were important to and maintained by generations of settlers, their precise purpose, be it religious or communal, remains unclear. “Were they lighting fires underneath or feasting near them or just looking at them?” asked Guagnin in the same news story published by the Abu Dhabi-based, English-language newspaper The National. “One of the functions of rock art sites in general is not just in actual symbolism and belief that might be linked to the imagery. It’s a way to mark space; this is the place we come to meet.”

Though prehistoric settlement on the Arabian peninsula was sparse, sporadic, and often temporary, the stone camel sculptures at Al-Jawf suggest that there was more to these early settlers than previously thought. To quote the archaeologists, their research into this symbolic gathering place, possibly more ancient than Stonehenge and the Pyramids of Giza combined, brings “new insight on the complex societal and ceremonial picture of the prehistoric period in northern Arabia.”