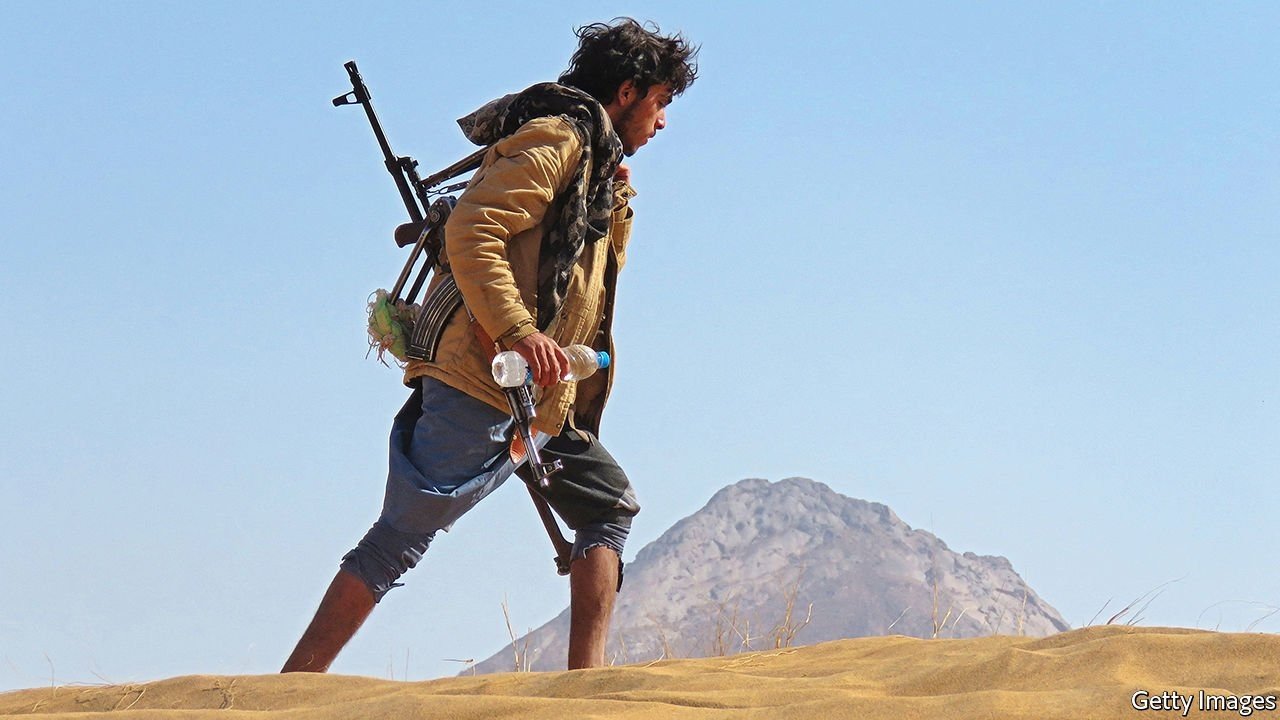 Saudi Arabia cannot find a way out of Yemen

The Saudi-led coalition’s withdrawal from a key port underscores its struggles
DURING THE Korean war an American general quipped that his beleaguered troops were not retreating, just “advancing in a different direction”. So too it was for the Saudi-led coalition in Yemen, which in mid-November withdrew its forces from Hodeida, the main port on the country’s Red Sea coast. The Houthis, a group of Shia rebels who have been fighting the coalition since 2015, swept in to seize it.

The pull-out was a surprise to almost everyone, even the UN observers deployed to monitor a ceasefire in the area since 2018. “[This] represents a major shift of the front lines”, the observer mission noted, a remarkable exercise in understatement.

In the coalition’s telling, withdrawal was a strategic choice (probably influenced by the United Arab Emirates, a coalition partner that backs the local fighters). The old ceasefire deal, signed in Stockholm, was meant as a first step towards a broader peace between the Houthis and the internationally recognised government. Instead, it locked in the status quo. The combatants never withdrew from Hodeida, as required, and while the truce did reduce violence, it was routinely violated. With a stalemate on the ground, coalition troops were perhaps better deployed elsewhere.

Hodeida was once a priority for the coalition. Today, though, it is almost a sideshow to the bigger fight happening 260km (162 miles) to the north-east, in Marib. Once a relative oasis of peace, the city, controlled by the coalition, hosts some 1m internally displaced people. Northern Yemen’s sole oil refinery is there; so is a highway that connects Yemen to Saudi Arabia. Seizing Marib would be a victory both symbolic and strategic—and the Houthis increasingly seem to have the upper hand.

Since the rebels escalated their push for Marib in February, both sides have settled into a long war of attrition. Coalition forces have dug into the hills that ring the city, backed by Saudi jets roaring overhead. Pro-Saudi media run frequent stories about air strikes that kill scores of Houthis.

The group does not deny the cost: the Houthi-controlled defence ministry says that 14,700 of its fighters have been killed in Marib just since June. Many were no doubt conscripts, including children, pressed into service and pushed forward in “human-wave” attacks that have worn down the city’s defences. The UN says more than 40,000 people have been displaced in Marib over the past two months.

The fighting has added to Yemen’s misery. Some 80% of its 30m people need aid to survive; more than 2m young children are severely malnourished. The rial, Yemen’s currency, has hit record lows several times this year in government-controlled areas, leaving many families unable to afford food and other essentials.

Tim Lenderking, the American special envoy for Yemen, travelled to the region for talks in November. He has little to show for a dozen such trips this year. The UN representative has fared no better. Blame for the diplomatic impasse lies largely with the Houthis, who think they are winning and see little reason to negotiate.

The Saudis, by contrast, are growing desperate to end the war, if only for self-interested reasons. A conflict sold to the public in 2015 as a quick romp has instead become a quagmire, one that has cost the kingdom untold billions and damaged relations with key partners, particularly America. It has also invited frequent drone and missile attacks by the Houthis. The coalition says it intercepts 90% of attacks (a figure that is hard to verify). Still, a few have hit airports and other vital infrastructure. The Saudis are moving to shore up their border defences in expectation of more Houthi advances in Marib.

With American and UN-led talks faltering, the Saudis have begun negotiating with arch-rival Iran, which has supported the Houthis with arms and cash. The two regional powers held low-level talks earlier this year. Yet the Saudis have little to offer Iran, which is happy to see its foe bleed.

Even if Iran wanted to help, it probably does not have enough control over the Houthis to force them to strike a deal. The Saudis are eager to cut their losses, but they cannot find a way to do so.