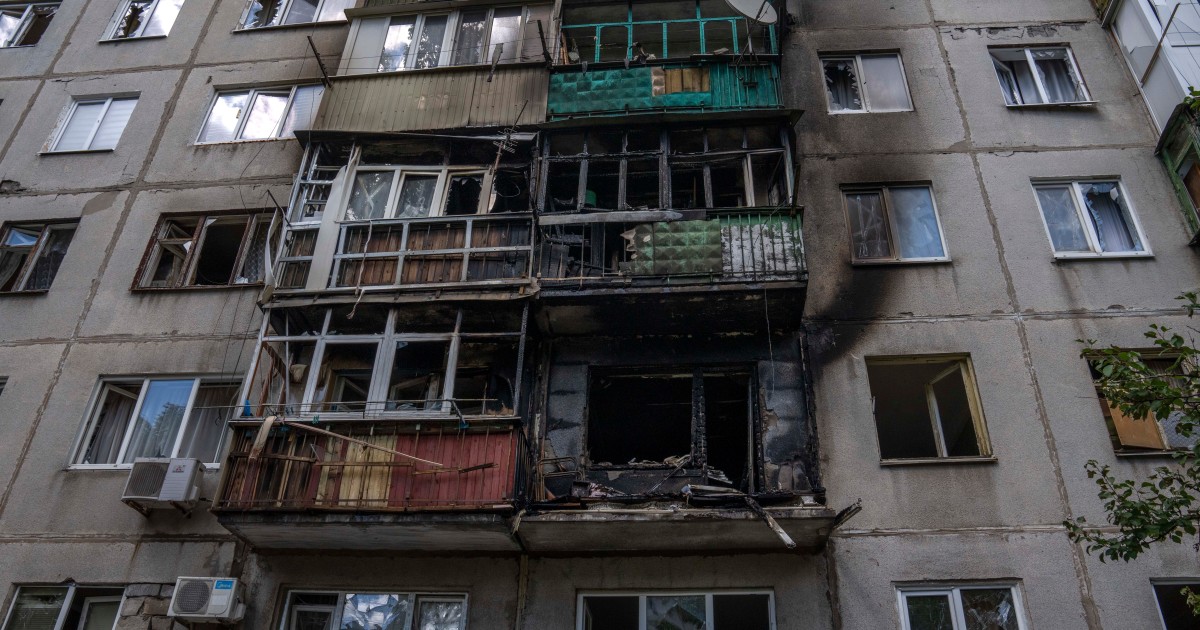 Russian missiles have struck cities and villages in eastern and southern Ukraine, hitting homes, a school and a community centre as Russian President Vladimir Putin was in Iran to discuss a United Nations-backed proposal to unblock exports of Ukrainian grain.

At least two civilians were killed and 15 more were wounded by Russian attacks across Ukraine during the past 24 hours, Ukraine’s presidential office said in a morning update on Monday.

In Kramatorsk, a city in eastern Ukraine’s Donetsk province that is considered a likely occupation target of Russian forces, one person was killed in an air raid on Monday that hit a five-story residential building, regional governor Pavlo Kyrylenko said in televised comments.

Ukraine’s Emergency Service said on Telegram that 10 people were wounded, five of them hospitalised, but it did not mention any deaths.

Fresh blood stained the concrete nearby as apartments on at least two floors burned. In the aftermath of the attack, shrapnel was placed in a small pile near an empty playground.

“There was no one here. Everything is ruined,” Halyna Maydannyk, the resident of one burned apartment, told The Associated Press. “Who knows why they’re doing this? We were all living peacefully.”

Kramatorsk residents Mykola Zavodovskyi and Tetiana Zavodovska stood in bandages outside a local hospital. They said they heard a loud clap and went to their balcony to investigate. Then everything exploded and the windows shattered.

“Probably, it was a rocket, and probably it was brought down by Ukrainian forces,” they told AP.

The attack came shortly after noon after Kyrylenko had earlier reported four other Russian raids in Kramatorsk and urged civilians to evacuate.

“The infrastructure of the cities is being methodically destroyed by missile strikes, and the civilian population, cut off from bare necessities, suffers the most,” Kyrylenko.

Ukrainian forces on the ground in the east are fighting to hold onto the declining territory under their control. 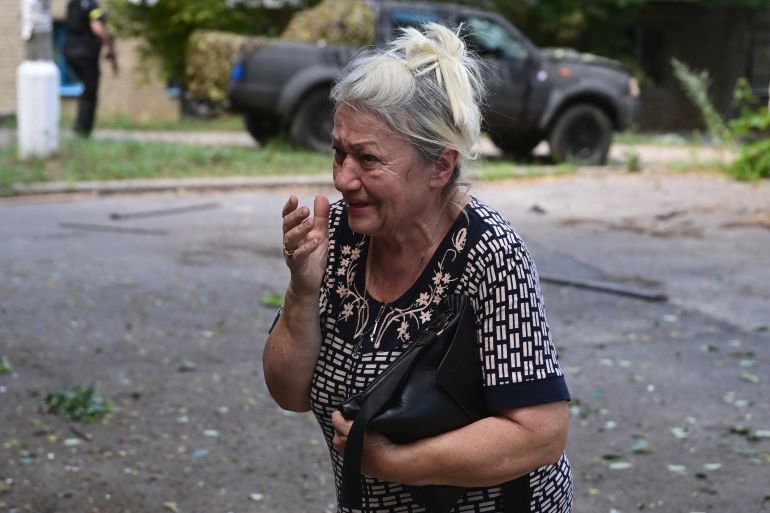 A woman reacts after an air raid hit the courtyard of civilian residences in the centre of Kramatorsk, eastern Ukraine

Russian forces also fired seven Kalibr cruise missiles overnight at the Odesa region in southern Ukraine. The Russian Ministry of Defence said attacks on the village of Bilenke had a legitimate military goal and “destroyed depots of ammunition for weapons supplied by the United States and European countries”.

“These strikes on peaceful people have one goal – to intimidate the population and the authorities and keep them in constant tension,” Serhiy Bratchuk, the speaker of the Odesa regional government, told Ukrainian television.

Amid indications that Ukraine was planning counterattacks to retake occupied areas, the Russian military in recent weeks has targeted Odesa and parts of southern Ukraine where its troops captured cities earlier in the war.

Ukrainian armed forces, meanwhile, have struck a key bridge in Russia-controlled territory in the south of the country with US-supplied HIMARS rockets, a Russian-installed regional official said on Tuesday.

In a video posted by the Russian state-owned TASS news agency, the deputy head of the Russian-installed administration in the southern Kherson region, Kirill Stremousov, said Ukraine hit the Antonivskyi bridge in Kherson with HIMARS, damaging the road but not injuring anybody. 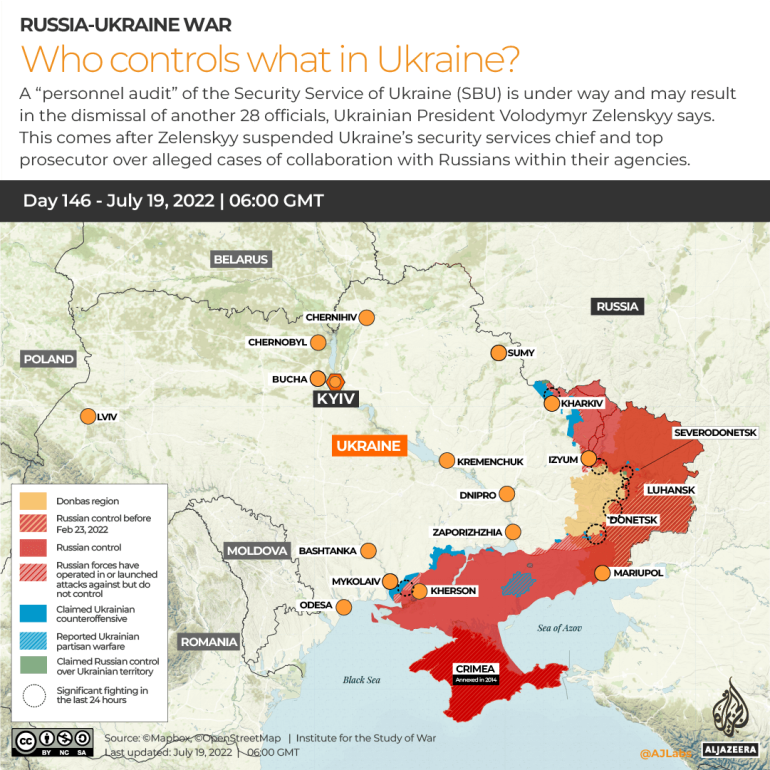 The missile attacks came as the British military said it believes Russia is facing “increasingly acute” problems in keeping up its troop strength in its grinding war of attrition that began with the February 24 invasion of Ukraine.

The British defence ministry said in a Tuesday morning assessment that Russia “has struggled to sustain effective offensive combat power since the start of the invasion, and this problem is likely becoming increasingly acute” as Moscow seeks to conquer the Donbas region of eastern Ukraine.

The British military added, “While Russia may still make further territorial gains, their operational tempo and rate of advance is likely to be very slow without a significant operational pause for reorganisation and refit.”

More than two weeks have passed since Russia’s last major territorial gain – capturing the eastern Ukrainian city of Lysychansk – and Ukraine’s General Army Staff said on Tuesday that Moscow’s forces were busy shoring up their positions in recently seized territory and mounting limited but unsuccessful ground assaults, albeit in numerous different locations.
But senior Russian security official said on Tuesday that peace in Ukraine, when it came, would be on Moscow’s terms.

Dmitry Medvedev, Russia’s former president who is now deputy head of its Security Council, struck a defiant tone though, signalling that Moscow was ready to do whatever it took in order to prevail.

“Russia will achieve all its goals. There will be peace – on our terms,” Medvedev said.

As the West heaps sanctions on Russia and the costly campaign drags on, Putin is seeking to bolster ties with Tehran, a fellow target of severe US sanctions and a potential military and trade partner.

But perhaps most crucially, the Tehran trip offers Putin a chance for a high-stakes meeting with Erdogan, who has sought to help broker talks on a peaceful settlement of the Russia-Ukraine conflict, as well as help negotiations to unblock Ukrainian grain through the Black Sea.