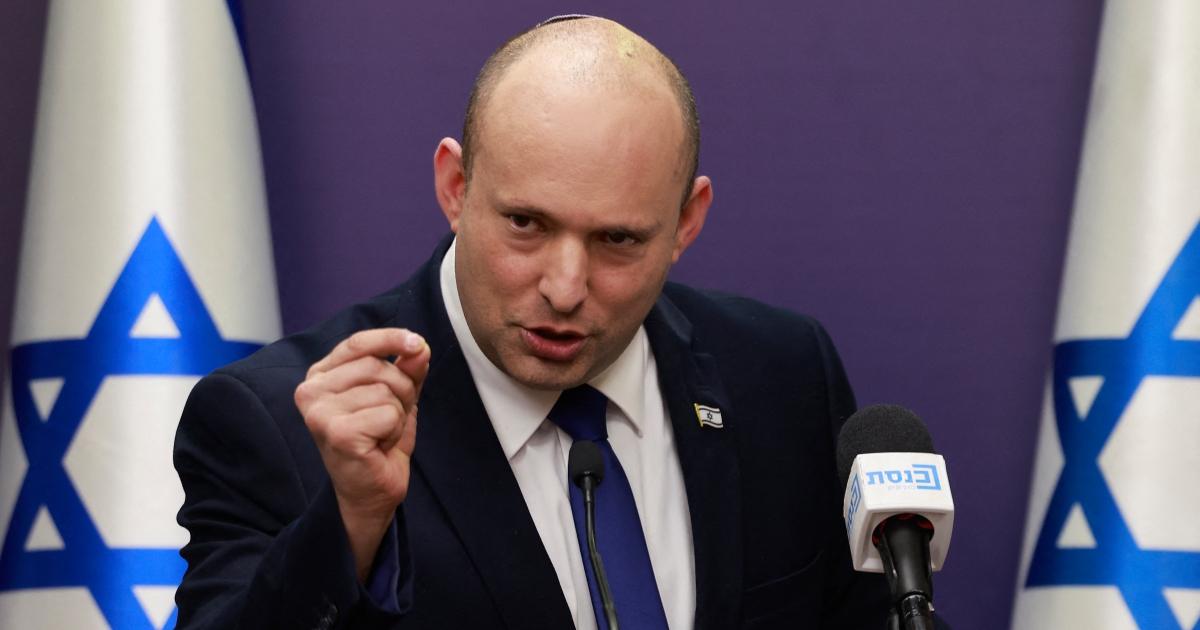 The Israeli leader’s comment came after a member of his party said he would not vote with the fragile coalition.

The Israeli government has a “week or two” to solve its internal problems or face collapse, Prime Minister Naftali Bennett has told the Israeli Knesset after his fragile coalition lost another supporter.

Nir Orbach, who is a member of Bennett’s own right-wing Yamina party, said on Monday that he would stop voting with the government coalition, which prompted Bennett’s warning.

The coalition marked one year in office on Monday but is struggling to survive.

“We have a week or week two to settle the problems in the coalition and then we can last a long time to continue the good we are doing,” Bennett told a special session of the Knesset.

“But if we don’t succeed, we won’t be able to continue,” Bennett added.

A trickle of defections and rebellions in recent weeks has left Bennett’s coalition of eight divergent parties without a clear majority to pass legislation, raising questions about how long it can survive.

Bennett’s government was sworn in last June after four deadlocked elections that were largely referendums on longtime leader Benjamin Netanyahu’s fitness to rule while on trial for corruption.

The coalition includes hard-right, liberal and Arab parties. They are united in their opposition to Netanyahu but have little else in common.

Israel’s right-wing is dominant in the country’s parliament, but it is split between supporters and opponents of Netanyahu.

The presence of the United Arab List (UAL), a party that represents Palestinian citizens of Israel, in the coalition is opposed by many on the Israeli right.

The UAL itself has repeatedly threatened to withdraw from the coalition in protest against attacks by Israeli forces in the Al-Aqsa Mosque compound in occupied East Jerusalem, and continued raids in the occupied West Bank.

The divisions between the coalition partners are becoming more prominent, with members like Orbach now considering their participation in government untenable.

“I have informed the prime minister that based on the current situation, I am no longer part of the coalition,” Orbach said in a statement published by several Israeli media outlets.

But Orbach held out hope the coalition might somehow be rescued, saying he would not yet vote to dissolve parliament and send the country to another round of elections.

The lawmaker’s departure left Bennett’s coalition two short of a majority, with 59 seats in the 120-member Knesset.

The embattled coalition can remain in power until a majority of MPs vote to either dissolve parliament or appoints a different prime minister. Neither scenario appears imminent.

Bennett said in his speech at the Knesset: “This government isn’t perfect, but the alternative isn’t better.”

His main ally, foreign minister Yair Lapid, wrote on Twitter that the coalition was “the only way to protect Israeli democracy and the strength of the state of Israel.”

Meanwhile, Netanyahu – now leader of the opposition and vowing a comeback despite being on trial for alleged corruption – said the government was holding “one of the longest funerals in history”.

Following weeks of internal disputes, the clearest sign of the coalition’s weakness came last week when a bill extending Israeli civil law rights to settlers in the occupied West Bank was defeated in parliament.

The defeat has brought closer the prospect of a fifth election in three years, although the bill is likely to be returned to the Knesset for a second attempt before the end of the month.

The settler law, which would normally enjoy broad support in parliament and has been repeatedly renewed over the past 50 years, failed to be renewed due to the increasingly bitter climate between the government and opposition.

“You are not fighting for our country but for your own seat,” Netanyahu told Bennett, once one of his closest aides, during a debate in parliament.

Bennett, a former commando and tech millionaire who entered national politics in 2013, said his government had boosted economic growth, cut unemployment and eliminated the deficit for the first time in 14 years.