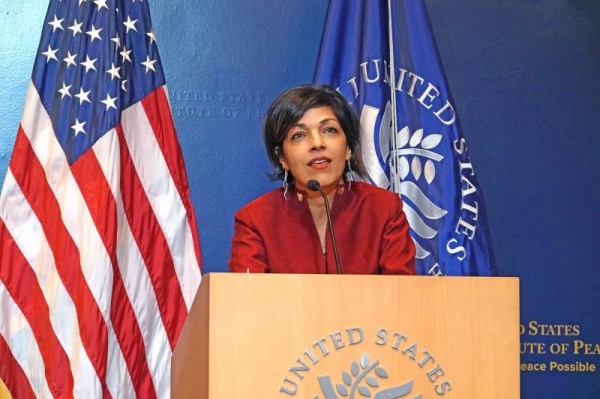 Muslim countries must be leading voices on Afghan women's rights, US envoy says

Rina Amiri, the US Special Envoy for Afghan Women, Girls, and Human Rights called on Muslim majority countries to be the loudest voices on women’s rights and human rights in Afghanistan.
In an interview with Okaz/Saudi Gazette, Amiri said it is important for Saudi Arabia to be a leading voice in countering the Taliban narrative, as the Kingdom is the country that the Muslim world overall looks to.

“I am Muslim. I know from my own experience and from history that Islam is the first religion that gave women their rights. I look to Muslim countries to engage with the Taliban, to challenge that narrative, to engage Afghans, and to say no.”

She said: “Islam is a religion very much aligned with human rights and with women’s rights.”

Also, institutions like the GCC and the OIC can show Afghans that they are not abandoned and that their brothers and sisters in the Muslim world stand with them and defend their rights within the framework of Islam.

The US envoy lauded Saudi Arabia’s contribution of $30 million to the Afghanistan Humanitarian Trust Fund that the OIC and Islamic Development Bank have established. “We are very grateful for all the projects that are in place right now. This is the work that we all must do together. We must give the Afghan population support in terms of meeting basic needs.”

A year after the Taliban takeover, she described the human rights situation in Afghanistan as “a great tragedy”.

“We saw that 20 years of effort and engagement in Afghanistan had resulted in a population, particularly the women of the country, that were leaders at every level of society, senior levels of the government, in the parliament, at the forefront of civil society as activists, and in every profession from judges to doctors to engineers. Overnight, the Taliban took over and the population was stripped of every single right. It has been a real struggle because there is such a sense of frustration for what is happening to 40 million Afghans and a desire to help them all at the same time because of the measures that the Taliban themselves have taken.”

The US special envoy said the situation has only gotten worse. “Since March 23, there have been at least 16 decrees restricting women’s and girls’ rights, everything from preventing them to work in many sectors, to effectively banning them from secondary education, to introducing increasingly regressive measures in terms of the way they dress and stripping them of just about every level of freedom, even their right to mobility,” she said.

Amiri added: “Women feel that they have been put in prison. They have lost any sense of hope that they may be given agency in their own futures and their capacity to help their own country.”

“As a result of that, we have data. We have seen statistics from the last two decades. We have seen polls. We have seen communities come out over and over again and large percentages – over 70, 80 percent – note what they want, particularly on education. There is no discrepancy in terms of what women and men are saying about education. Girls and women should have the right to education, the right to work, and the right to public participation.

“If you look at the information, this is not just anecdotal; there are polls that reflect this. Yes, those rights that women struggled for, the changes that were put in place, they are embedded in the people.”

Amiri said that the Taliban do not respect the voices of the Afghan people. "If the Taliban continue in the direction that they are going now, where they deny women and girls their rights, deny families a say in allowing their daughters and wives to go to school and work, it will lead to massive migration flows out of the country and to refugee flow. It will lead to a more impoverished country. Ultimately, it will lead to more instability in the country. A country stripped of its women is a country that will be radicalized. It will be a poor country. It will be a country without hope. That is going to be not only an enormous security risk inside of Afghanistan but a risk for the region and the world. This is where terrorism comes from. Terrorism comes from lack of hope and from societies that are radicalized through extreme ideologies.

“The policies are largely not different from [those of] the 1990s. There might have been some progress in allowing girls to attend primary school. Beyond that, the population that lived under the Taliban in 1990s, the people that I speak to, what they tell me is that it is the Taliban the way it has changed in one way is that they are strategic. But, what they note is ‘we are Afghanistan 2.0, and they are Taliban 1.0’.”

“We want the Taliban to take the steps to deliver on the commitments they have made in the Doha agreement. While those sanctions are in place, we are invested in making sure that it does not inject further suffering on the 40 million Afghan people.”

The US envoy asked the Taliban to respect the rights of the Afghan people. “We are asking them to deliver on the commitments that they made to the Afghan people. For the last three years, the Taliban have been reassuring Afghans and the world that they are different than the 1990s, that they recognize that Afghanistan is a different country, that they recognize that education is a fundamental right in Islam. They have said that women should have the right to work in almost every sector. They have said that they respect pluralism and ethnic diversity in Afghanistan. Yet their policies completely contradict all their commitments,” Amiri said.

“It will amplify the problems that the world is already wrapped in with. What we need to do now is prevent the situation from going in that direction,” Amiri said.

Amiri admitted that certainly there are differences in the way we talk about human rights, even on issues that we prioritize. “But, by and large, human rights are fundamental to what each of us strive for in society. We want to protect our children. We want to have the capacity of choice for a better future. We want the authorities who are governing a country to respect our capacity to make our own choices about our lives. We want to have a reason to hope and clarity and reassurances that our families and communities have a set of rights that are going to be respected and that will be protected. That is very basic to every society.”

She added: “We should not make this distinction that human rights are a western concept for the educated. Human rights are even more fundamental for poor people who are the most vulnerable.”
#Afghanistan