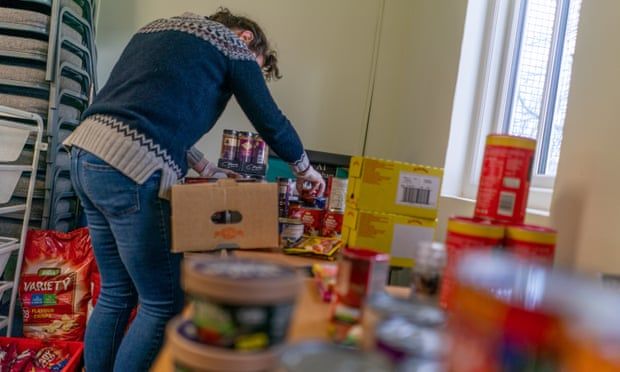 One in seven adults estimated to be food-insecure, up 57% from January, owing to rising cost of living

More than 2 million adults in the UK have gone without food for a whole day over the past month because they cannot afford to eat, according to a survey revealing the “catastrophic” impact of the cost of living crisis.

The latest survey of the nation’s food intake shows a 57% jump in the proportion of households cutting back on food or skipping meals over the first three months of this year, with one in seven adults (7.3 million) estimated to be food-insecure, up from 4.7 million in January.

The shadow work and pensions secretary, Jonathan Ashworth, described the findings as devastating, saying they exposed how families were being left in desperate hardship. “Boris Johnson is responsible for this crisis and has no solutions to fix it,” he said.

The survey came as one of Britain’s biggest energy suppliers called for urgent government action to help households cope with an anticipated £1,000 rise in bills this winter. The London fire brigade, meanwhile, was forced to issue an urgent safety warning against improvising fires at home, after a man set fire to his house by burning timber in his living room to keep warm. 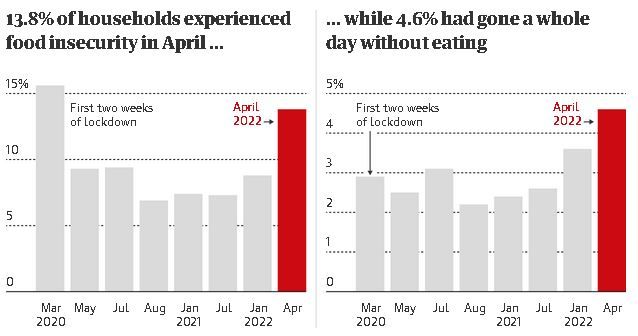 The research by the Food Foundation thinktank found millions more people – including 2.6 million children – report they now have smaller meals than usual, regularly skip meals altogether or do not eat when they are hungry, as food insecurity returns to levels last seen at the start of the first national lockdown.

However, while many reported missing out on meals or eating irregularly during the first months of the pandemic because of food scarcity caused by panic buying and supply problems, the latest increase is put down to rising costs and poverty.

Food banks are reporting that energy costs are so prohibitive for some people they request that charity food parcels that contain no food that has to be cooked using a cooker or that needs to be stored in a fridge or freezer.

The rapid deterioration in food security reflects soaring energy, food and petrol prices coupled with below-inflation benefit rises. The Food Foundation said it was so shocked by its initial findings that it reran the survey on a wider basis, only to get the same results.

It predicted food insecurity figures were likely to get worse over the next few months as inflation continues to rise and the full impact of April’s national insurance rise hits family budgets along with the lifting of the energy price cap.

Anna Taylor, the foundation’s executive director, said: “The extremely rapid rise in food insecurity since January points to a catastrophic situation for families. Food insecurity puts families under extreme mental stress and forces people to survive on the cheapest calories, which lead to health problems.”

Prof Sir Michael Marmot, a public health expert at University College London, said: “If one household in seven is food insecure, society is failing in a fundamental way. These figures on food insecurity are all the more chilling because the problem is soluble, but far from being solved it is getting worse.”

There is little expectation that ministers will raise benefits or expand free school meals anytime soon, despite rising public concern over the cost of living. Last week, George Eustice, the environment, food and rural affairs secretary, urged consumers to switch to value brands to save on grocery spending in response to rising food prices.

“Bless him [Eustice], he’s actually aware there are cheaper brand foods in the world. The poor man, who has lived such a sheltered life he thought 10p off a tin of beans would solve the problem,” said Kathleen Kerridge, an office manager and food activist from Portsmouth.

On the food poverty frontline, charities are warning that demand for food is rising as budgets get tighter. Ellen-Scarlett Ryan, of Bassetlaw food bank in Worksop, said it supplied 24 households with food parcels on the day after Easter last month, way ahead of its previous record of 16.

Many of these clients had never before used food banks and were struggling with their newfound reliance on charity to feed their families, Ryan said. “We are finding people in floods of tears. They are so scared, they are at their wits’ end. It is such a difficult and emotional time.”

Households were making the food go further, she said, putting smaller portions on the table and bulking out dishes with lentils and rice. A growing number were asking for food that did not require cooking with the gas on, as they could not afford to put cash in the meter.

On Monday Keith Anderson, the chief executive of Scottish Power, said a fresh support package would be vital before a further dramatic increase in the cost of gas and electricity bills due in October.

A government spokesperson said: “We recognise the pressures on the cost of living and we are doing what we can to help, including spending £22bn across the next financial year to support people with energy bills and cut fuel duty.

“For the hardest hit, we’re putting an average of £1,000 more per year into the pockets of working families on universal credit, have also boosted the minimum wage by more than £1,000 a year for full-time workers and our household support fund is there to help with the cost of everyday essentials.”