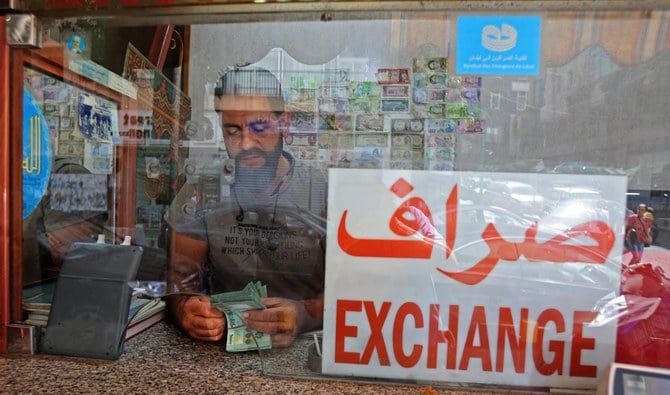 Lebanon is fast running out of medicines and infant formula, with deliveries at a standstill and supplies expected to run out within days, the head of the country’s pharmacists’ syndicate has warned.
Joe Salloum said that the exchange rate crisis has led to an almost complete cessation of medicine and infant formula deliveries to pharmacies.

He added: “Salvation begins with electing a new president to secure a minimum level of financial and economic stability, and to restore constitutional and legislative life so that we can take a path to recovery and develop executive plans, especially for the health sector.

“Otherwise, we will face an inevitable collapse and forced cessation of the entire pharmaceutical sector within days.”

The currency has gradually depreciated over the past three years.

Hobeika told Arab News: “The political horizon is completely blocked and the Lebanese market is small, meaning that any pressure on the demand for the dollar affects the exchange rate.

“No one in Lebanon is selling their dollars. Those who are visiting Lebanon are Lebanese expatriates spending the holidays here. They either exchange small amounts of dollars or pay directly in dollars in restaurants and shops.”

The economist added: “It is true that the political situation is the same, but Lebanon is sinking more and more every day — neither electing a president, nor forming a government, nor implementing reforms. The dramatic drop in the local currency’s value is proof.”

Hobeika said that the Central Bank was no longer able to fix the situation.

Its financial reserves, which are $10 billion as announced, and perhaps lower, are no longer sufficient to fix the situation, said the economist.

“Every two weeks we face issues with the purchase of subsidized cancer medicine and wheat. If the Central Bank were able to control the exchange rate, it would have already done so.”

Hobeika said that the crisis had become too big for the Central Bank to resolve.

Economic committees are expected to approve the content of an agreement with the General Labor Union, raising the minimum wage from 2.5 million Lebanese pounds ($1,650) to 4.5 million LBP, raising the daily transportation allowance from 90,000 LBP to 125,000 LBP, and increasing school and family allowances.

Hobeika, however, said that addressing the issue by raising the minimum wage will increase inflation, warning that the exchange rate could reach 70,000 LBP or more very soon.

The General Labor Union had called for raising the minimum wage to 20 million LBP when the dollar exchange rate was equivalent to 36,000 LBP.

The value of the local Lebanese currency hit a record low on Wednesday.

The fall came as the Central Bank extended a circular allowing commercial banks to purchase an unlimited amount of US dollars on its Sayrafa exchange platform until the end of January.

The drop in the exchange rate was reflected in fuel prices.

The representative of fuel distributors, Fadi Abu Shakra, said: “We are witnessing a crime against Lebanese citizens who are deprived of benefiting from the drop in global oil prices.”

He added: “We, as distributors, buy dollars from the parallel market to cover the price of fuel, and the Central Bank also buys dollars; so we are technically racing our Central Bank, which is unacceptable.”

The exchange rate is expected to hit 50,000 LBP by the start of 2023 and possibly 100,000 LBP within months if no political breakthrough is made in the country.

The UN estimates that eight out of 10 people in Lebanon now live below the poverty line.