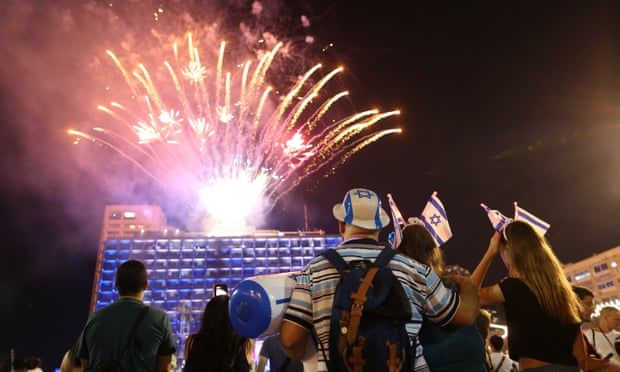 Parties and celebrations that begin on Wednesday evening in more than a dozen cities, including Tel Aviv, will not be accompanied by the cracks and bangs of fireworks. Israeli authorities in Jerusalem have opted instead for a silent pyrotechnic show.

The move comes after increasingly vocal concerns from former soldiers, who say that the noisy festivities bring back the horrors of war.

“After much thought and consideration, which also included a comprehensive survey, I decided that there will be no fireworks at Independence Day ceremonies this year,” the mayor of Tel Aviv, Ron Huldai, said in a statement.

“One of the things that shaped and influenced the decision were appeals from soldiers struggling with PTSD seeking to cancel the show, as well as full consideration for the people living with disabilities. I hope that next year we will find a suitable alternative.”

“For most Israelis, fireworks are maybe a nice image in the sky, but for [veterans] it is the sound of gunfire and battle,” the Israeli culture minister, Hili Tropper, wrote in a Facebook post announcing that this year’s national ceremony in Jerusalem would proceed without fireworks.

“They have fought enough. They have paid a heavy price. This year we are reaching out to them.”

Currently, Jewish men and women in Israel must complete at least two years’ military service. The country has fought several wars since its creation 74 years ago, and occupied the Palestinian territories since 1967. According to Israeli defence ministry figures from 2020, about 5,000 former soldiers are recognised as having PTSD, although the actual number is believed to be much higher.

The country was shaken this time last year when a 26-year-old veteran of the 2014 Gaza war suffering from PTSD set himself on fire near Tel Aviv, resulting in severe injuries. The incident prompted debate over the adequacy of support systems for wounded and psychologically ill soldiers.

“Awareness of PTSD is growing among the public … There isn’t a single family who doesn’t know someone with PTSD,” said Prof Yair Bar-Haim, the acting director of the National Centre for Traumatic Stress and Resilience at Tel Aviv University.

“More veterans are coming forward to talk about their difficulties than before. It’s a gradual process, but I think it’s becoming very clear to Israelis that people who experienced war should be accommodated and taken seriously. When you weigh the price the people we sent to war paid, versus 15 minutes of joy seeing fireworks in the sky, it’s an easy decision.”

About 5% to 8% of Israel’s general population has been diagnosed with PTSD, comparable with rates in western countries, although the proportion with conflict-related psychological difficulties is higher, Bar-Haim said.

In the occupied Palestinian territories, where data is patchier, one survey found 23.2% of Palestinian adolescents suffered from PTSD. Dr Samah Jabr, a leading psychiatrist in Ramallah, has argued that the diagnosis does not adequately describe the Palestinian experience of trauma, which she calls “repetitive and ongoing”.
#Facebook