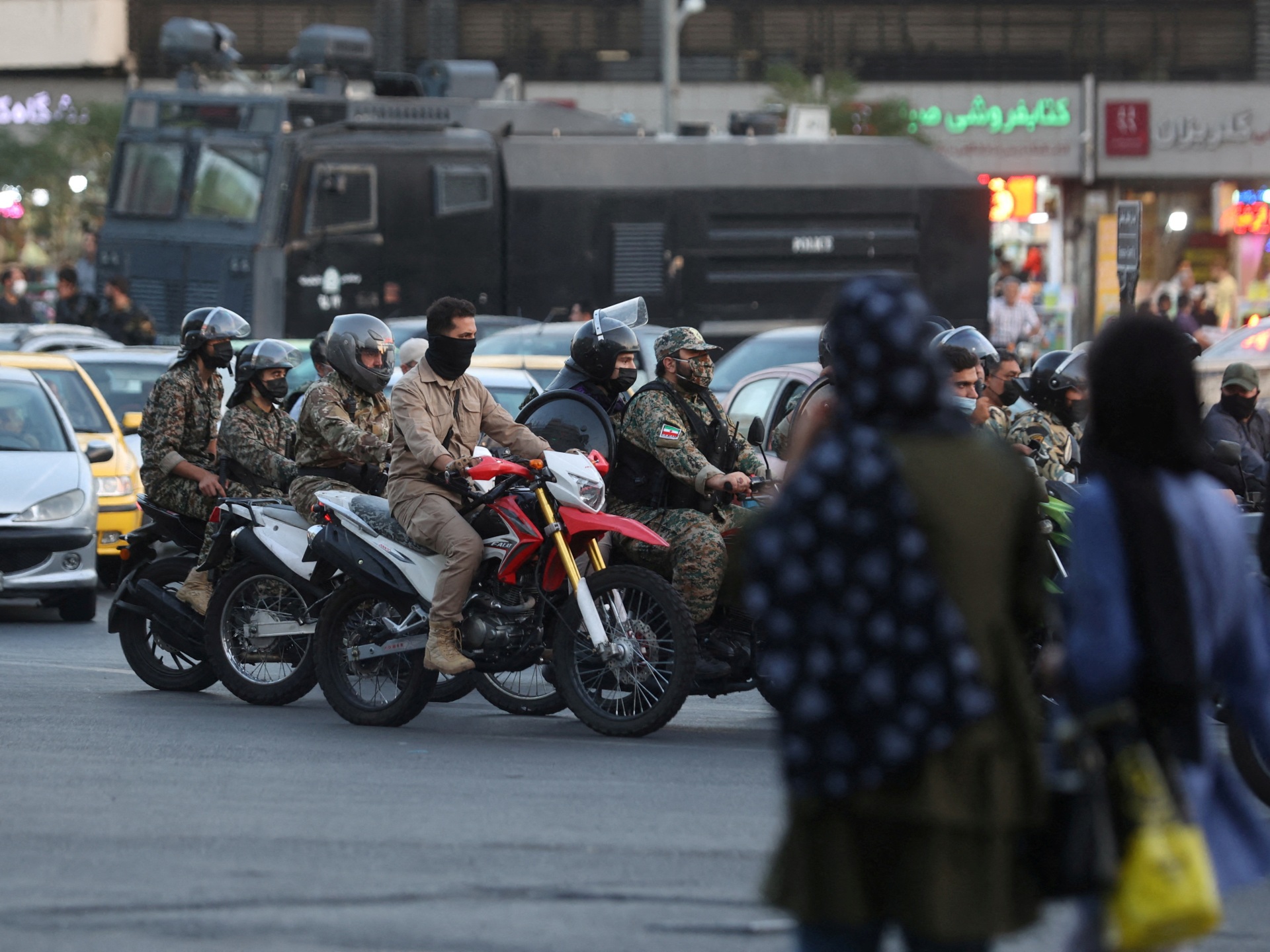 Central command says offenders will face legal consequences according to the rules.

Police in Iran have launched an investigation after a video showed riot police repeatedly kicking and then shooting a man.

The two-minute clip was posted on social media on Tuesday, in the seventh week of the protests that erupted across Iran after the death of a young woman in custody.

It shows policemen walking in an alley at night and using their batons to beat a man lying on the ground. The man, whose lower body and feet are visible in the angle of the video, tries to protect his head and body from the hits and kicks.

The officers in riot gear then leave him on the ground but moments later, another police member arrives and starts beating him with a baton. The final moments of the video, which was shot on a mobile phone from an overlooking building, show a policeman shooting the man at point-blank range with what appears to be a pellet shotgun.

On Wednesday, the central command of the Iranian police said in a short statement carried by state media that it had launched an investigation to determine the exact time and place of the incident and identify violating officers.

“The police in no way condone violence and unconventional behaviour and offenders will certainly face legal measures according to the rules,” it said.

British-based rights group Amnesty International also posted the video on Twitter, calling it “another horrific reminder that the cruelty of Iran’s security forces knows no bounds” and urging the United Nations Human Rights Council to investigate.

The release of the video comes amid the protests that broke out shortly after the death of Mahsa Amini on September 16.

The 22-year-old woman died in a hospital in Tehran after collapsing in a “re-education” centre that she had been taken to by the country’s so-called “morality police” following her arrest due to alleged non-compliance with a mandatory dress code. Her family has challenged an official investigation that found she was not beaten and died of pre-existing conditions.

Dozens of people, including security forces, are believed to have been killed during the protests, but authorities have not published an official tally. Many more have been wounded or arrested, and Iran this week began holding the first court cases for “rioters”.

The UN has expressed “concern” about developments in Iran, while the United States and Albania are due to hold an informal Security Council meeting on the protests on Wednesday that can be attended by all UN members.

Iranian officials have denounced the meeting as politically motivated and criticised the special UN rapporteur on human rights in the country for agreeing to brief it.

In a speech delivered on Wednesday, Iran’s supreme leader, Ayatollah Ali Khamenei, repeated once again his claim that the United States, Israel and others have been behind unrest across Iran.

The events of the past few weeks constitute not only “street riots” but also a “hybrid war”, Khamenei said.

“Enemies, meaning the US, the Zionist regime (Israel), some insidious and treacherous European powers and some groups came to the field with everything at their disposal and tried to hurt the nation using their intelligence and media organisations and social media and employing past experiences in Iran,” he added.

The supreme leader for the first time said some of the many young people who have taken to the streets in the protests were “our own children”, but had been misled and acted as a result of “excitement and feelings, and some carelessness”.