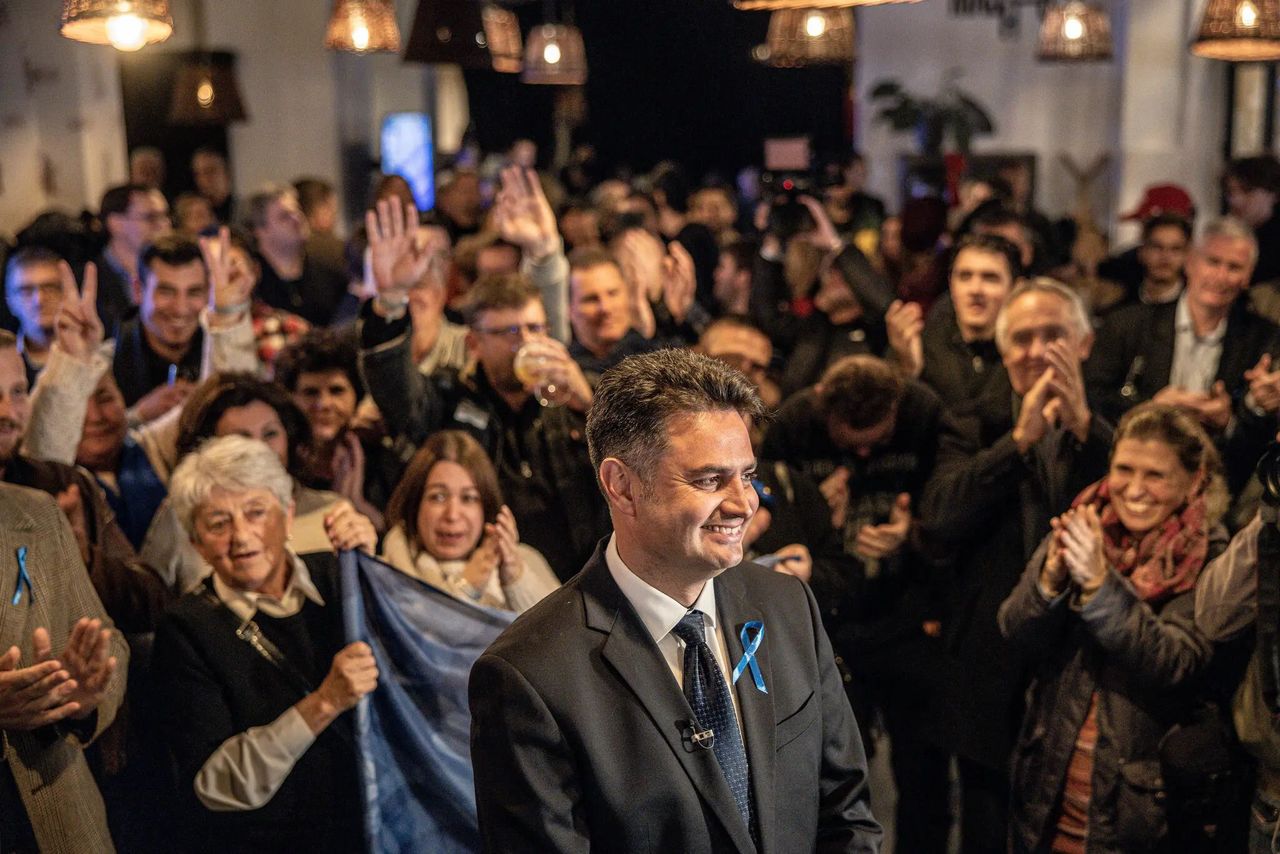 The country’s normally fractious opposition has rallied around a conservative mayor who just might be able to oust the authoritarian prime minister after more than a decade.
A devout Catholic, he abhors abortion as “murder” and once voted for Viktor Orban, Hungary’s pugnacious populist leader, impressed by his promises to root out corruption and end the disarray left by years of leftist rule.

On Sunday, however, Peter Marki-Zay, the mayor of this town in Hungary’s conservative rural heartland, became the most potent threat yet to the decade-long stranglehold on the country by Mr. Orban and his combative brand of far-right nationalism.

Mr. Marki-Zay, 49, victorious in a primary election that brought together six previously squabbling opposition parties, is now the standard-bearer for a rickety political alliance that will challenge and, according to opinion polls, perhaps defeat Mr. Orban and his political machine, Fidesz, in legislative elections next year.

Previous challengers hoping to unseat Mr. Orban, who has been prime minister since 2010, mostly channeled the frustrations and anger of a liberal elite in Budapest. This time, the mayor is fighting Fidesz on its own terms and home turf — small towns and villages where many voters, Mr. Marki-Zay included, once found comfort in Mr. Orban’s conservative message but grew disenchanted with what they see as his corruption, hypocrisy and authoritarian tendencies.

“Orban’s only real ideology now is corruption,” Mr. Marki-Zay, the mayor of Hodmezovasarhely, (pronounced HOD-may-zur-vash-ar-hay), in southern Hungary, said in an interview in Budapest.

Many voters, particularly in Budapest, he added, do not share his own conservative views, “but they know I don’t steal and can beat Orban. I’m not corrupt.”

Janos Csanyi, a 78-year-old former porcelain factory worker who used to vote for Mr. Orban’s Fidesz party, scoffed at Mr. Orban’s oft-repeated claim that, by demonizing migrants, many of whom are Muslim, and confronting the European Union over media freedom, L.G.B.T.Q. rights and other issues, Hungary is defending Europe’s traditional, Christian values.

“I don’t understand what he is talking about,” Mr. Csanyi said, resting in the sun on a park bench in Hodmezovasarhely’s main square, adding that he had other priorities. “There are Ten Commandments and a very important one of these is: ‘Don’t Steal.’”

An anti-corruption stance resonates loudly in Hodmezovasarhely. A former Fidesz mayor and a close associate of Mr. Orban, Janos Lazar, is part owner of a vast hunting lodge on a landed estate outside town, and a contract for an E.U.-funded street lighting project when it was controlled by Fidesz went to a company controlled by Mr. Orban’s son-in-law, upsetting many.

The European Union’s anti-graft agency investigated the lighting project and in 2018 reported “serious irregularities” and “conflicts of interest” in the awarding of contracts. Fidesz-appointed prosecutors declined to take up the case.

“The lights don’t even work. When the sun goes down you can’t see anything,” said Norbert Forrai, a local resident who, despairing at Hungary’s direction under Mr. Orban, moved to England but recently returned home “to be part of the change that I hope is finally coming.”

Fidesz still has many ways to block that change. It has a firm grip on most media outlets, and controls an extensive patronage network rooted in jobs in the state sector and in companies controlled by Mr. Orban’s associates.

This gives the governing party far more levers to influence voters than the region’s other populist strongmen, one of whom, Andrej Babis, the Czech Republic’s billionaire prime minister, this month suffered an electoral defeat at the hands of a center-right coalition.

Trained to savage Mr. Orban’s opponents as traitorous liberals serving the Hungarian-born financier George Soros, pro-Fidesz media outlets have struggled to find a new line of attack against an unexpected conservative opponent. A news portal close to Fidesz gave up trying over the weekend and claimed that Mr. Marki-Zay was also an agent of Mr. Soros.

Fidesz has been so wrong-footed by the primaries that, at its local headquarters in Hodmezovasarhely last week, it was still collecting signatures for a petition denouncing a candidate who had already lost — the liberal mayor of Budapest.

The Budapest mayor, Gergely Karacsony, withdrew from the primaries after the first round last month and urged his liberal base to rally behind Mr. Marki-Zay, a former marketing manager with seven children, who lived for five years in Canada and the United States.

“We have to accept political reality. It is not liberals or greens who can beat right-wing populists,” Mr. Karacsony said in an interview. A future government led by a churchgoing provincial mayor, he added, “will obviously have different strategies than those I would pursue,” but “the important thing is to pick a candidate who can win against Orban.”

And, he said, “Nationalist populism is most successful in small towns and rural areas where people are afraid.” He added, “Marki-Zay is a mayor in one of these places and understands the fears and problems of these people.”

The populist wave that swept across Eastern and Central Europe and other parts of the world over the past decade was, he said, in the process of “passing” following the defeat of President Donald J. Trump, Benjamin Netanyahu in Israel and Mr. Babis in the Czech Republic.

“Now it is up to Hungary and Poland,” Mr. Karacsony said, referring to his own country’s election next year and elections in 2023 that will decide whether Poland’s nationalist governing party, Law and Justice, hangs on to power.

While describing himself as “first and foremost a Catholic,” Mr. Marki-Zay insists he respects the separation of church and state in Hungary and that his personal views on things like abortion will not shape his policies should he become prime minister. Mr. Orban, he added, was never really a conservative, “just an opportunist.”

“He openly betrays Europe, the United States, NATO and Christian values,” he said, referring to Mr. Orban’s warm relations with President Vladimir V. Putin of Russia and China’s Communist Party leadership. “He is a crook.”

He expressed dismay that right-wing pundits and politicians in the United States like Tucker Carlson, who visited Hungary in August and lavished praise on Mr. Orban, view the country as a bastion of conservative values and a lodestar for those who value liberty. “Tucker Carlson forgot to mention where Orban stands on China and Putin,” Mr. Marki-Zay said.

Mr. Marki-Zay shocked Fidesz in 2018 when he easily won a by-election in his hometown after the death of the incumbent, a supporter of Mr. Orban. A year later, he won a regular mayoral election with an even bigger margin.

The end of Fidesz’s previous near-monopoly over local affairs rattled the party faithful.

“It came as a big surprise for us all,” said Tomas Cseri, a Fidesz member of the municipal council.

“If this could happen in a place like this it can happen anywhere,” Mr. Cseri added. “The longer you are in power the more and more people think it is time for a change.”

He acknowledged that Mr. Marki-Zay is a more threatening opponent to the party than the losing left-wing candidate in the final round of the opposition primary, but, echoing a line promoted by Fidesz’s propaganda apparatus, dismissed him as a Trojan horse for leftists in the six-party coalition and denounced corruption allegations against Fidesz as a lie.

“If we had stolen so much I would not be still riding that,” he said, pointing to an old bicycle parked against a lamppost.

Still, anger against what many local residents, including former fans of Mr. Orban, see as theft and bullying by Fidesz is widespread.

Imre Kendi, an architect who runs a construction business, used to vote for the governing party and once served as an adviser to Mr. Lazar when Fidesz still controlled the town. But he fell out with the former mayor, and soon found himself not being paid for money he was owed for a government contract, which he said forced him to declare bankruptcy.

“Fear is what keeps the whole system together,” he said.

But, he predicted, “change started here in this small town and now it is going to continue around the nation.”
#Viktor Orban