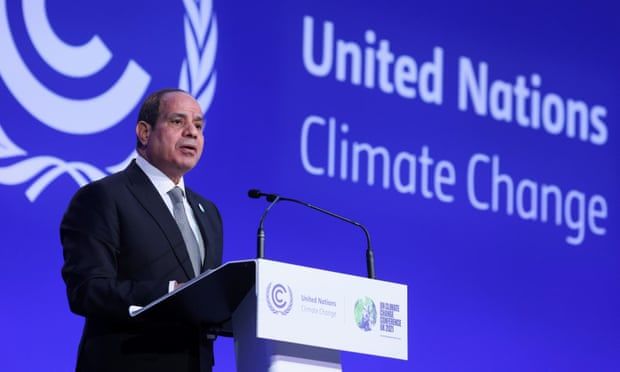 Egyptian NGOs complain of being shut out of Cop27 climate summit

Civil society groups say covert screening process excluded government’s critics
A group of Egyptian civil society organisations have been prevented from attending the Cop27 climate summit by a covert registration process that filtered out groups critical of the Egyptian government.

Egypt’s foreign, environment and social solidarity ministries privately selected and screened NGOs that would be permitted to apply for one-time registration for Cop27, a separate process from applications for official observer status, which closed last year.

The permitted groups were then provided with application details by the UN body responsible for overseeing Cop27, the United Nations Framework Convention on Climate Change (UNFCCC).

The application process and the selection criteria were not made public, and civil society groups were not informed that they could request to attend the conference via these ministries or how they could apply, essentially shutting them out.

“You don’t let a government tell the UN who is and who isn’t an NGO, certainly not the Egyptian government,” said Ahmad Abdallah, of the Egyptian Commission for Rights and Freedoms (ECRF), one of five leading organisations unable to register to attend the conference due to the screening.

“You would expect the UN to have an extra duty of care when dealing with a place like Egypt to ensure that independent organisations have equal chances of applying and then examine the situation. But they’re not taking this extra care. They’re dealing with Egypt as though this was Sweden,” he added.

The result, he said, was that “the UN is colluding with the Egyptian government to whitewash this regime”.

The Egyptian authorities’ efforts to screen out prominent organisations with a record of criticising their rule, particularly on the issue of human rights, comes amid growing concern over their treatment of protests and civil society at the Cop in Sharm el-Sheikh in November.

The UNFCCC told the Guardian host nations were permitted to invite organisations at their discretion for one-time access, but that “there is no fixed written policy” on one-time registration. The UK did not recommend any NGOs for one-time admission to attend Cop26.

A UNFCCC spokesperson said: “We advised the government of Egypt that they may request the [Cop] bureau to provide for a one-off admission for specific entities, but given the timeframe and resources available we would not be in a position to screen or conduct due diligence of these organisations. If we did not facilitate the processing of this proposed list, the access by civil society groups from the host country to the official Cop venue would be limited.

“The secretariat considers that not facilitating this request would lead to a less inclusive participation of civil society. The secretariat does not consider itself to be competent to unilaterally identify additional organisations from the host country who have not applied for admission.”

Abdallah said the Egyptian government wished to use Cop27 “to portray a different image of Egypt, one where people are kept away from cities suffering from pollution, poverty or repression. Part of this image is keeping critical voices out so that the only ones heard in Sharm el-Sheikh are those praising the government.”

He added: “It’s setting a precedent if we allow this to pass without a huge backlash, meaning this practice could become the norm, which is dangerous not just for Egypt.”

Since coming to power in a military coup in 2013, Sisi has moved to strangle civil society activity. The state has demanded that NGOs receive government approval to continue operating and has outlawed funding received from abroad as a way to curtail their operations.

Organisations tracking detentions by security services, use of torture by state bodies or the state’s crackdown on civil rights have found their offices raided, their founders targeted with asset freezes and travel bans or their premises forcibly closed by the authorities.

The ECRF and other organisations prevented from registering to attend Cop27 – the Egyptian Initiative for Personal Rights, the Cairo Institute for Human Rights Studies, the Center for Egyptian Women’s Legal Assistance and the Association for Freedom of Thought and Expression – have all faced years of intimidation and attacks by the state for their work.

Abdallah told the Guardian the ECRF had applied to attend Cop27 not just to represent Egyptian citizens but also to provide legal assistance in Sharm el-Sheikh to anyone detained for protesting.

“Not allowing ECRF to attend strips participants from our protection, meaning protection from a watchdog organisation that can actually support them,” he said. “No one else is doing this.”

Saber Osman, of the Climate Earth Foundation for Development, whose organisation gained admission to Cop27 through projects and connections with the Egyptian environment ministry, said he agreed with the state’s decision to screen NGOs.

“To tell you the truth, I don’t think the government made any mistakes,” he said. Approximately 35 NGOs were granted permission to attend by the UNFCCC after the Egyptian state’s referral.

Osman said he approached the environment ministry to apply for Cop27 observer status as his organisation was just a few months old. “It was a very smooth process for us,” he said.

“To put myself in the government’s position, there are 46,000 NGOs in Egypt,” he said, citing a number frequently used by the government. “So if the government made a public announcement, they’d have 46,000 applications and it would be very difficult, a big mess.”

Climate justice activists have said Egypt should not be allowed to host Cop27 while thousands of prisoners of conscience remain behind bars, particularly the British-Egyptian activist and blogger Alaa Abd El-Fattah, now more than four months into a hunger strike. Abd El-Fattah, imprisoned on terrorism charges for a social media post, told his family during a recent visit that he believed he would die in prison.

A spokesperson for the Egyptian foreign ministry told the Guardian it had submitted a list of 56 NGOs to the UNFCCC with a request that they receive one-time registration.

“The list of recommendations submitted by the incoming Cop presidency was compiled based on a set of criteria including relevance of the activities of the NGO to climate change and environmental issues, the legal status of the entity, previous experiences in implementation and contributing to addressing climate change, including in cooperation with the relevant executive agencies, and scope and level of outreach at the local, national and regional spheres,” they said.