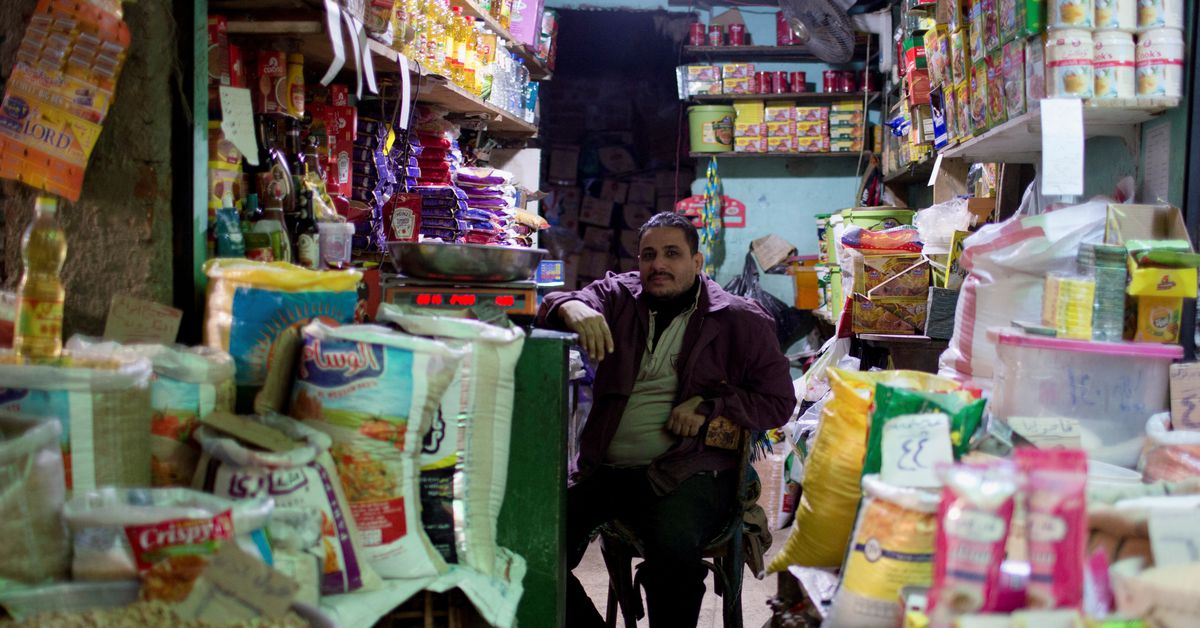 Now there is no money for vacations. Om Mohamed, 61, and her husband, who live with two grown-up sons in an apartment near the Cairo ringroad, are cutting back on items like meat as they try to get by on his meagre pension from an energy company.

Over recent months accelerating inflation has pummelled the spending power of Egyptians, who had already endured repeated economic shocks and years of austerity.

Along with a currency crisis, it has exposed the vulnerability of an economy long propped up by international lenders and Gulf allies that see Egypt as a lynchpin of regional security.

The government says it is doing what it can to tamp down prices and expand social spending, often blaming current pressures on external factors linked to the war in Ukraine.

It also points to a state-led infrastructure boom that has given rise to new roads and cities and helped Egypt's economy stay in growth through the coronavirus pandemic.

For Om Mohamed, that is little comfort. Her husband now rises early to queue for heavily subsidized bread. One of her daughters, who lives nearby, has been selling jewellery to pay for her young children's schooling, after finding no state education options in the area.

"We don't have a proper sewage system or clean water. Sometimes I open the tap and the water smells like sewage, and I cannot afford to buy bottled water every day," Om Mohamed said during an interview at her apartment in a rubbish-strewn street on the northern outskirts of Cairo.

"There is no middle class anymore, only upper-class people are able to live right now," she added.

The fallout from Russia's invasion of Ukraine in February 2022 exacerbated Egypt's foreign currency crunch, as foreign investors who were already cooling on the country rapidly withdrew more than $20 billion, a tourism recovery was cut short and the bill for key imports spiked.

The central bank allowed the first in a series of sharp devaluations and Egypt sought its latest round of support from oil-rich Gulf states and the International Monetary Fund.

The Egyptian pound has fallen by nearly 50% since last March and annual headline inflation has climbed above 20%, its highest for five years, though consumers note far steeper price increases for many goods, including basic food items that some shops have begun to ration.

While many countries are struggling to contain rampant inflation, Egypt, with a population of 104 million, is among the hardest hit. 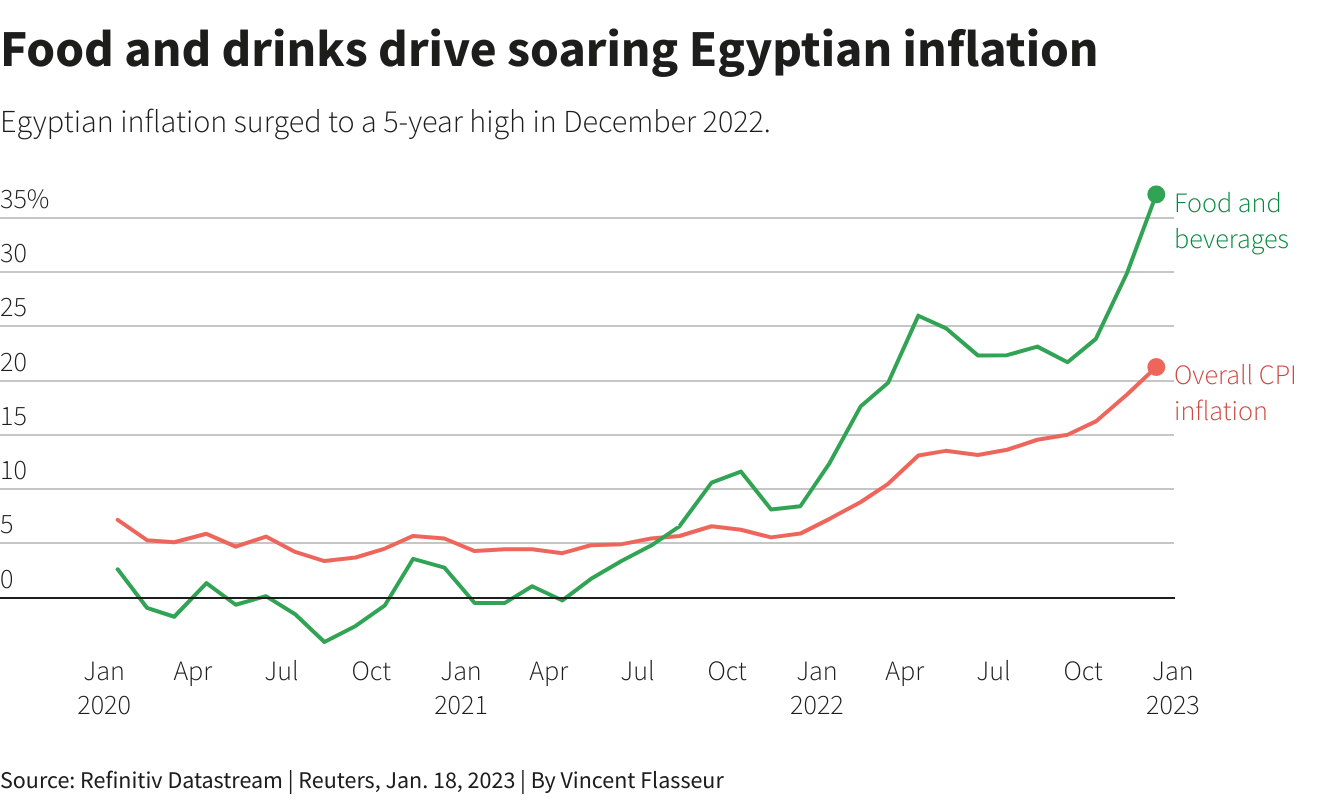 About 30% of Egyptians were living in poverty as of 2020, according to official data. While no official figures have been released since before the pandemic, economists estimate that poverty is on the rise, and that many more are living close to the poverty line.

Two charities contacted by Reuters said they were finding it hard to fundraise and were worried they would have to cut back on services.

The head of one of the charities, the Abwab El Kheir Foundation, said some people who used to donate were now seeking help themselves, putting its provision of meals, medical treatment and other support across 15 Egyptian cities under strain.

"The requests for aid in the past three months are double those for the same period last year. All of these are people who have a source of income, but it's becoming too little to sustain a living," said Haitham el-Tabei, speaking ahead of the delivery of meals to a working-class neighbourhood in central Cairo.

President Abdel Fattah al-Sisi, a former army chief who ousted Egypt's first democratically elected leader in 2013, has acknowledged that the situation is tough but said the challenges are not of the state's making.

Comments by Sisi last week telling Egyptians to "stop yapping" about the economy, drew satirical jibes on social media, as did a recent government directive suggesting chicken feet as a cheap and protein-rich option for hard-up households.

So far there are few outward signs of public dissent, which would be risky. Tight security imposed during a far-reaching crackdown on political opposition under Sisi means public protests are effectively banned and social media accounts are subject to surveillance. 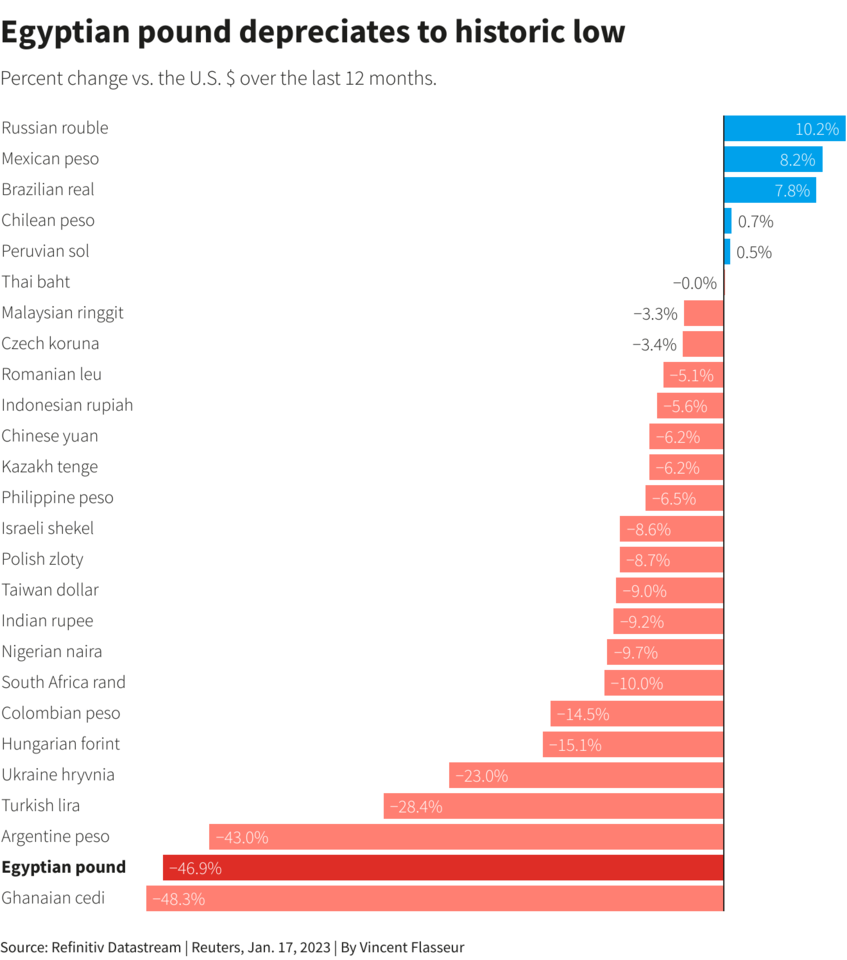 Still, more economic turmoil in the shorter term complicates Egypt's plans to try to turn things round after the political and economic turbulence that followed its 2011 Arab Spring uprising.

The country recently started a new IMF deal, which includes $3 billion in financing to be paid in instalments after reviews, and is meant to push authorities to reduce spending and the debt burden, permanently shift to a flexible exchange rate and undertake structural reforms, including scaling back the economic role of the state and the military.

The agreement also provides for increasing social spending to protect the vulnerable. However, if inflation this year remains higher than expected, this could trigger consultations with the IMF and add to budgetary pressures by pushing the government to spend more on subsidies.

The government, which heavily subsidizes bread for more than 70 million citizens, this week began providing cost price loaves to those who don't hold subsidy cards. Officials say a cash allowance for the country's poorest families has been expanded to cover more than five million families.

For many though, such support falls short.

"The charities cover a big part of the needs in Egypt, even for those who receive pensions and the various government allowances," said el-Tabei, the charity director.