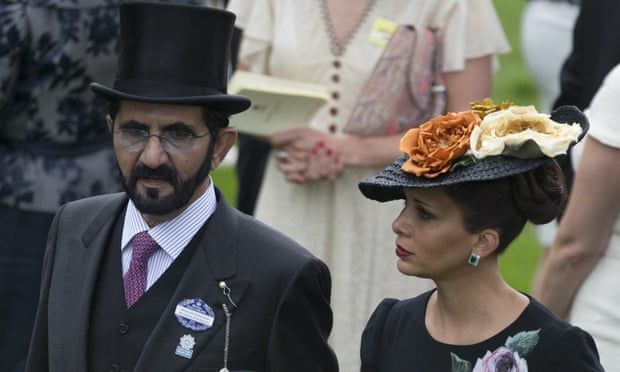 The ruler of Dubai will have no face-to-face contact with his two children from his marriage to Princess Haya nor any substantive say in their upbringing, after a long-running court battle between the former couple and a series of damning judgments about his “abusive behaviour”.

Concluding more than two and a half years of legal proceedings, which began when Haya fled to the UK with the children in April 2019, the president of the family division of the high court in England and Wales said Sheikh Mohammed bin Rashid al-Maktoum had “consistently displayed coercive and controlling behaviour with respect to those members of his family who he regards as behaving contrary to his will”.

In a written judgment, Sir Andrew McFarlane ruled that Haya would have sole responsibility for decisions relating to the children’s medical care and schooling. He said the Dubai ruler, who is also prime minister of the United Arab Emirates, a close Gulf ally of Britain, had inflicted “domestic abuse” on an extraordinary scale against his ex-wife, which had emotionally and psychologically harmed their children and would continue to do so if she were required to gain approval for matters involving their wellbeing.

At the outset of proceedings, Sheikh Mohammed had sought the return of Jalila, now 14, and Zayed, now 10, to Dubai. But McFarlane said that since October 2019 the Dubai ruler had accepted that the children would remain living with their mother in England and, on 1 December last year had announced that he would no longer pursue direct contact with them.

This change of heart followed damning judgments by McFarlane which determined, on the balance of probabilities, that:

* Sheikh Mohammed orchestrated the abductions and confinement of two of his other children, Princess Latifa and Princess Shamsa – in the latter case from the streets of Cambridge – and subjected Haya to a campaign of “harassment and intimidation”.

* He hacked the phones of Haya and five of her associates, including two of her lawyers, using NSO Group’s Pegasus spyware while the couple were locked in court proceedings.

* His agents attempted to buy a £30m estate next door to Haya’s Berkshire home in a “very significant threat to her security”, while publicly denying they were doing so.

In the latest judgment, published on Thursday, McFarlane noted Sheikh Mohammed’s failure to attend or play a part in any of the many court hearings, instead relying on his lawyers, and the absence from him “of any acceptance of responsibility, expression of remorse or understanding of the impact of this behaviour on the mother” and failure to acknowledge Haya’s good parenting.

Describing the co-parenting relationship as “entirely bankrupt”, he wrote: “The children are being harmed by the degree to which their mother is compromised emotionally and in terms of the time and focus she has been able to give to them because of the need to engage with all of the issues that have preoccupied her these last three years, and by the impact that the need constantly to engage with the demands of this court process has had on her.

“The harm to the children from all of these factors will, I am clear, continue if she is, in the future, required to communicate with his highness to gain his approval for matters, even serious matters, relating to the children’s health, education or psychological wellbeing.”

In oral evidence, Haya, who last year was awarded a potentially record-breaking divorce settlement that could exceed £500m to protect her and their children from the sheikh, said: “To look forward to shared parental responsibility with somebody who cannot even see you as a parent, or bear to mention your name on paper, does not feel like that there is anything shared about it.”

McFarlane said a series of legal challenges, including appeals, brought by the sheikh’s lawyers, while legitimate, were a manifestation of a desire to “coerce and control” Haya and prevent or curtail the court’s investigations.

He added: “His highness’s behaviour towards the mother, in each of its separate manifestations, whether by threats, poems, coordinating press reports, covertly arranging to purchase property immediately overlooking hers, phone hacking or in the conduct of this litigation, has been abusive to a high, indeed exorbitant, degree.”

The result of the judgment is that Sheikh Mohammed will be limited to “indirect contact” with his children, for example by phone or via messaging apps.

McFarlane said the explicit naming of children in a welfare judgment appeared to be unprecedented but Haya and Jalila favoured publication and it would “remove the potential for conjecture, manipulation and/or falsehood” by the sheikh or those acting for him with respect to the children’s welfare.

In a statement issued on Thursday, Haya thanked the court and her legal team. She said: “The last few years have been a frightening journey and yet the sanctuary, protection and extraordinary compassion we have experienced in England have strengthened our belief in the enduring power of both humanity and justice.”

A statement issued on behalf of Sheikh Mohammed said: “He loves his children and cherishes their love for him. He has always cared and provided for them, and always will. He maintains his denial of the allegations made in these contentious proceedings.”