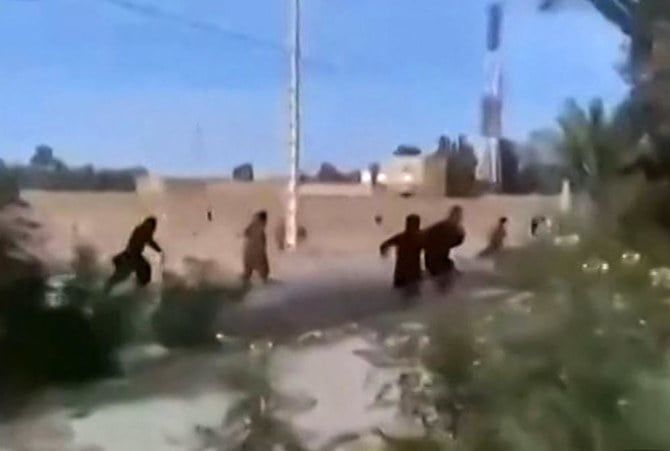 A crackdown on protesters in Iran’s Sistan and Balochistan province continued over the weekend, activists and residents said on Sunday, after security forces fired at demonstrators in Khash city amid deadly unrest. Protests have widened across the sprawling border province neighboring Pakistan and Afghanistan since a Sept. 30 rally in the regional capital, Zahedan, triggered a violent response from security forces.

The bloodshed has spread to other areas and on Friday soldiers fired live ammunition at demonstrators who marched from a key mosque to the governor house building in Khash, 145 km from Zahedan to rally against the Iranian government.

The Baloch Activists Campaign said the protesters were chanting “Death to the dictators” and “Death to Basiji” in reference to a volunteer force of the Islamic Revolutionary Guard Corps that has been involved in quelling the unrest.

Amnesty International reported that 10 people, including children, were killed, and said it was “gravely concerned about further bloodshed amid internet disruptions and reports of authorities bringing more security forces to Khash from Zahedan.”

Local activists and a prominent Sunni cleric, Mulvi Abdul Hamid, the imam of the central mosque of Zahedan, said that at least 16 people had been killed.

“A number of teenagers and young people who gathered in front of the governorate of Khash city and shouted slogans and started throwing stones were directly targeted by live rounds,” Hamid said in a statement on Saturday.

The incident showed “the depth of oppression and discrimination” in the region, he added.

Arab News could not independently verify the death tolls provided by Amnesty, activists and residents, but footage from Khash circulating on social media showed young protesters falling to the ground as troops fired at them.

Charred vehicles and smoke rising from buildings were seen in photos shared by Iranian state media, which blamed the damage on “rioters.”

Residents in neighboring areas said Khash has since gone into a communication blackout.

“Most of our friends and relatives in Zahedan and Khash were using the internet through VPN, but after Friday, they are unable to connect through VPN as well,” Asif Burhanzai, a resident of Mirjaveh near the Pakistan-Iran border told Arab News, adding that he was unable to contact his relatives in the city.

Mohammed Zia, a trader in Zahedan, said local reports estimated that the death toll in Khash has risen to 25 after Friday’s clashes and the whole city was now on strike.

“The situation is very grim for the third day in Khash after the deadly shootings carried out by the Iranian military,” he told Arab News.

“There is a complete shutdown strike in the entire city against the brutality committed against the innocent and unarmed protesters.”

Sistan and Balochistan is home to the long-oppressed Sunni Muslim Baluch ethnic group, a minority in predominantly Shiite Iran.

Demonstrations started in the province following the alleged rape a 15-year-old-girl Baloch by a police commander in the port city of Chabahar.

The violence comes amid countrywide demonstrations over the death of a 22-year-old Kurdish woman, Mahsa Amini, in the custody of Iranian morality police.

At least 304 people have been killed by security forces since the beginning of the protests in mid-September, according to the Norway-based Iran Human Rights organization.

“Iran Human Rights has received a high volume of reports of deaths which it continues to investigate with internet disruptions,” the group said in a statement on Saturday. “The actual number of people killed, therefore, is certainly higher.”

Deaths have been reported in 22 provinces, with the highest number in Sistan and Balochistan, Mazandaran, Tehran, Kurdistan, and Gilan.