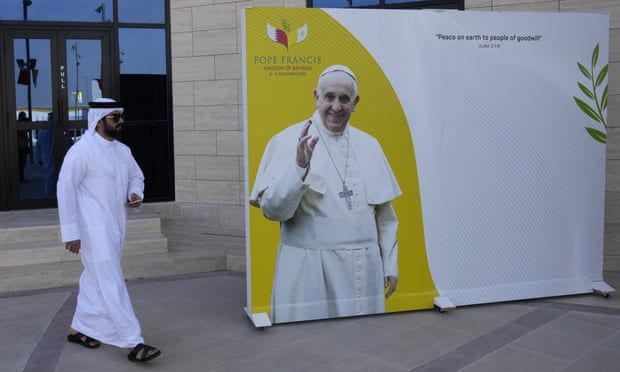 Exclusive: Mohammed Ramadhan, who alleges he was tortured into confessing to deadly bombing, urges pontiff to act on visit to Gulf state

A former airport security guard who is on death row in Bahrain for a crime he alleges he was tortured into confessing to has urged Pope Francis to call for his release during the pontiff’s visit to the Gulf state.

In a letter shared exclusively with the Guardian through the London-based Bahrain Institute for Rights and Democracy (Bird), Mohammed Ramadhan, who has been in prison for nine years, asked the pontiff to “ask the king of Bahrain to release me and reunite me with my family and children”.

On Thursday, Francis begins his three-day visit to Bahrain, where the largest Catholic church in the Gulf region opened last December. Bahrain has been criticised for serious human rights violations, especially its crackdown on the kingdom’s Shia Muslim majority in the aftermath of the 2011 pro-democracy uprising.

Ramadhan, 39, and a second man, Husain Moosa, 36, both Shia Muslims, were convicted of a bombing in which a police officer was killed in 2014 and sentenced to death, despite a Bahraini investigation finding medical evidence that matched the allegations of torture.

Ramadhan, who is Bahraini, had previously attended peaceful pro-democracy rallies, including one that took place on the third anniversary of Bahrain’s uprising.

The prisoner, who criticised the British foreign secretary, James Cleverly, for failing to keep a promise to raise his case during a visit to Bahrain last year, also claims that prison authorities are denying him medical attention for a painful lump in his neck.

The UK has close security and political links with Bahrain, and says it has worked with Bahrain to help the country reform its penal system. After a visit in February this year, Tariq Ahmad, the UK minister for south Asia and the Commonwealth, said it had been “fantastic to build on the historic UK-Bahrain relationship, discussing the human rights landscape and challenges, and reflecting on how the UK can best support Bahrain in its work and initiatives going forward”.

Bahrain’s interior ministry and other security services are supported by the UK’s Foreign Office as part of a Gulf strategy fund, which for this year totals £1.8bn, aimed at delivering “long-term security” to the state.

In 2020, days before Ramadhan learned that his death sentence had been upheld, Cleverly said during a parliamentary debate that the UK would “publicly and loudly remind Bahrain” of Britain’s opposition to the death penalty “and continue to seek to have it set aside” in Ramadhan’s and Moosa’s cases.

In a letter addressed to Cleverly in early October, Ramadhan wrote: “This promise was not fulfilled … There is a gulf between the words of the promise you made in parliament and the reality of your inaction when it comes to my case. Worse still, the UK has continued to support and train the very same people and institutions responsible for the torture I suffered, covering it up and paving the way for Bahrain’s courts to convict me on the basis of a false confession extracted under torture.”

At least 26 prisoners are on death row in Bahrain, of whom 12 have been sentenced in political cases, according to Bird. All 26 are at risk of imminent execution as they have exhausted all domestic remedies, the final step being the ratification of their death sentences by King Hamad bin Isa Khalifa.

A recent report from Human Rights Watch and Bird investigated eight cases of death row prisoners and found their trials had been in serious breach of international law, with sentences based solely on confessions that were allegedly forced through torture, including alleged electrical shocks to genitals, beatings, sleep deprivation and attempted rape.

Hasan Mushaima, the 74-year-old former leader of Bahrain’s opposition, is serving a life sentence for his role in leading the 2011 pro-democracy movement. In a letter addressed to the pope and also seen by the Guardian, he wrote: “The ruler’s claims of pluralism, diversity of opinions, tolerance and love are disproven by evidence and events which have played out over the years. It would also be disproven by a thorough visit to Bahrain’s prisons, which are filled with innocent people who pay the price for their demands of minimum rights.”

The families of death row inmates have also called on the pope to push for their release. “Our family members remain behind bars and at risk of execution despite the clear injustice of their convictions,” they wrote in a letter. “Many of them were targeted because they took part in pro-democracy protests during the Arab spring.”

Francis urged Bahrain to end the death penalty and promote basic human rights after arriving in the Gulf state on Thursday.

The pontiff’s remarks were made during an address to dignitaries in Manama, including his host, King Hamad bin Isa al-Khalifa. Francis said it was essential that “fundamental human rights are not violated but promoted”, adding: “I think in the first place of the right to life, of the need to guarantee that right always, including for those being punished, whose lives should not be taken.”

“This is a historic moment.” said Sayed Ahmed Alwadaei, director of advocacy at Bird. “We welcome Pope Francis using his visit to call on the regime to respect human rights and end the death penalty in front of the king of Bahrain.

“Since the ‘Arab Spring’ protests in 2011 there has been a drastic escalation in the use of the death penalty against pro-democracy protesters who have dared to argue for basic and rights and freedoms in Bahrain, death sentences ratified personally by King Hamad which the United Nations has condemned as ‘arbitrary killings’.

“King Hamad must now release those who are wrongly imprisoned so the country can finally begin to heal after years of violence and oppression.”

Francis will attend the Bahrain Forum for Dialogue: East and West for Human Coexistence, and celebrate a public mass at the Bahrain national stadium on Saturday.