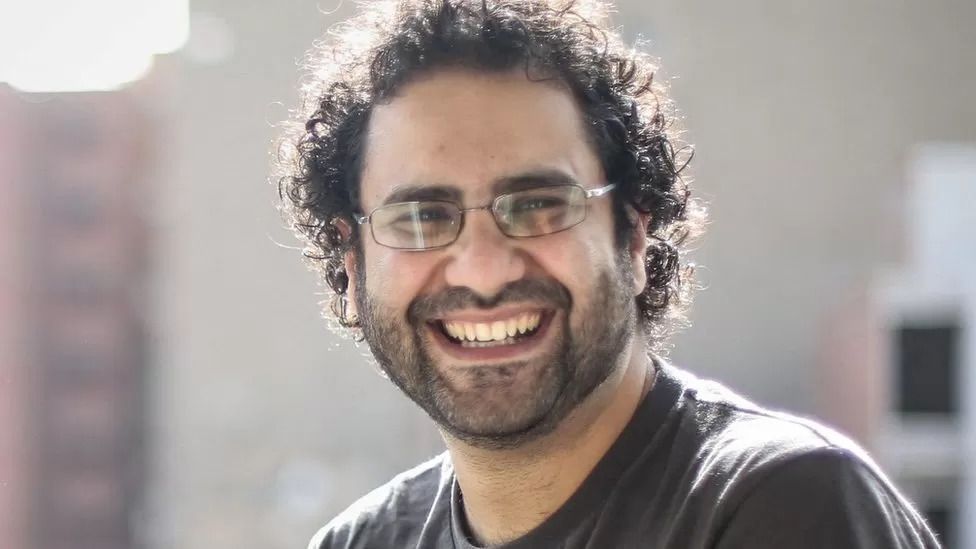 His sister told the BBC that they were in a state of "panic" three days after he said he would stop drinking water.

"We don't know if he's alive or not. Is he handcuffed and put on an IV drip?" Sanaa Seif said. "I have no idea."

She appealed to the UK to press Egypt for concrete information about her brother and then secure his release.

"I'm really worried and I want to ask Rishi Sunak that please, while you're working on his release, let's try to make sure he's actually alive."

The British prime minister told the House of Commons on Wednesday that he had raised Abdel Fattah's case with Egyptian President Abdul Fattah al-Sisi at the COP27 climate summit in Sharm el-Sheikh and that his "deep concern" grew "more urgent by the day".

"We will continue to press the Egyptian government to resolve the situation," he said. "We want to see Alaa freed and reunited with his family as soon as possible."

However, when pressed by Labour leader Keir Starmer on whether any progress had been made in securing Abdel Fattah's release, Mr Sunak did not provide an answer.

On Tuesday, UN human rights chief Volker Türk warned that Abdel Fattah's life was "at acute risk" and described him as one of a number of people in Egypt who had been "arbitrarily deprived of their liberty and incarcerated after unfair trials on multiple occasions".

"We're just panicking," Sanaa Seif said in an interview with the BBC from Sharm el-Sheikh, where she said the family had been buoyed by solidarity from around the world.

"We're trying to keep things together because, if he's alive, he can be saved."

French President Emmanuel Macron said on Monday that he had been assured by Mr Sisi that Egypt was "committed to ensuring that [the] health of Alaa Abdel Fattah is preserved".

Abdel Fattah's family has expressed concern that such comments might mean prison authorities were force-feeding him or putting him on intravenous drips against his will.

"I don't want my brother to die. I definitely want him to get medical help," Ms Seif said. "But I don't trust the prison doctors."

"I want someone from the British embassy to have access to him - to be an observer to whatever is happening."

Ms Seif said their brother was "putting his body on the line at this very critical time because it might be his only hope for survival, for getting his life back", adding: "An endless life in prison is not a life."

"If he's conscious, if he's alive, I'm pretty sure he is happy now and content because - for once - he's been able to say no."

Ms Seif, a human rights defender who has been jailed three times herself for advocating for her brother, said she believed that Egypt was using his imprisonment to "set an example to a generation of Egyptians who believe in freedom and democracy".

Abdel Fattah, a 40-year-old father of one, first rose to prominence during the 2011 uprising that forced long-time President Hosni Mubarak to resign.

Since Mr Sisi came to power in 2014 after leading the military's overthrow of Mubarak's democratically elected successor, he has spent most of the time in prison or police detention.

Last year, he was convicted of "spreading false news" in a Facebook post - a charge human rights groups condemned as spurious - and sentenced to five years in prison.

He began a partial hunger strike in April, hoping to pressure Egypt into at least allowing British diplomats to visit him.

With authorities continuing to refuse consular access, Abdel Fattah told his family in a letter from Wadi al-Natroun prison on 31 October that he would drink only water until the start of COP27 of Sunday and would then stop even doing that.

His other sister, Mona Seif, tweeted on Wednesday evening that their mother had waited for three days in a row outside the prison and was once again "leaving without a letter from Alaa Abdel Fattah, an explanation from authorities or any proof of life".

Earlier, she told the BBC's Breakfast programme that prison officials were claiming that Abdel Fattah had refused to write a letter.

"We have no way of verifying [that]. So we don't know if he is being prevented from writing the letter, or he has deteriorated beyond the point where he can't even be cognitively present to write us a letter, or if he is actually refusing to write the letter and something has triggered that response from him."

David Lammy, the shadow foreign secretary and the Labour constituency MP for Sanaa and Mona Seif, meanwhile told the BBC's Today programme that the Foreign Office should have acted sooner and used leverage that the UK had over Egypt because of a £4bn trade partnership.

"That is tremendous influence. Why has it taken months and months and months for the Foreign Office to act? The prime minister has effectively been dragged into this case because of COP. That should not have been the case.

"I've got to tell you that UK citizens have been badly, badly let down."