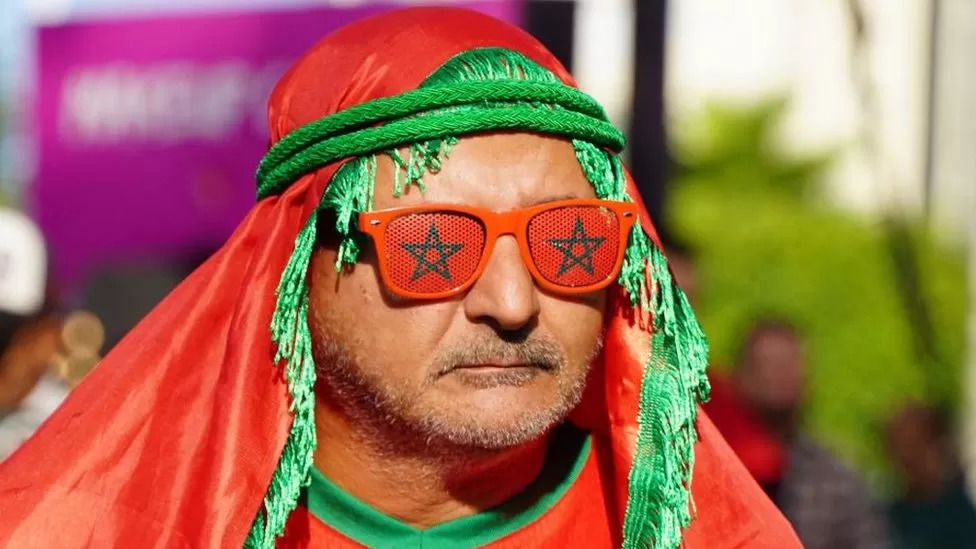 In our series of letters from African journalists, Magdi Abdelhadi looks at how football ignited a row about Moroccan identity.

It is fair to say that the World Cup in Qatar this year has been defined by controversy like no other tournament before.

From the controversial decision to grant Qatar the privilege of hosting the event despite its poor human rights record to the very last moment when the Emir of Qatar put an Arab cloak on the shoulders of the Argentinian football legend, Lionel Messi, as he was about to lift the trophy on Sunday.

But there is one controversy that attracted little or no attention outside North Africa. It started with the simple question: how do you describe the Moroccan team, the Atlas Lions, which stunned the whole world by its sterling performance - defying the odds to beat heavyweights such as Spain and Portugal? The "first Arab" or "African" team to reach the semi-final?

Culturally many Moroccans see themselves more as Arabs than Africans - and some sub-Saharan Africans in Morocco complain that racist attitudes are never far from the surface.

But comments by Moroccan winger Sofiane Boufal after their World Cup victory over Spain brought the debate about the country's continental identity to the fore. He thanked "all Moroccans all over the world for their support, to all Arab people, and to all Muslim people. This win belongs to you."

After a social media backlash, he took to Instagram to apologise for not mentioning the African continent's backing of the team - expressed at one stage by Nigeria's President Muhammadu Buhari when he said Morocco had "made the entire continent proud with their grit and dexterity". 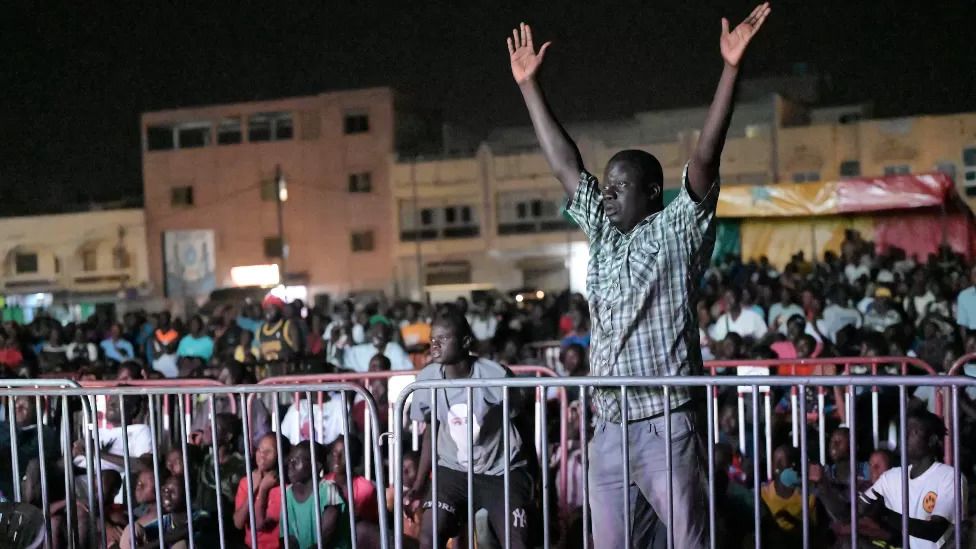 Morocco garnered support from the rest of Africa - including from this crowd in Senegal - as they took on France
Chastened, Boufal posted: "I also dedicate the victory to you of course. We are proud to represent all our brothers on the continent. TOGETHER."

The furore reflects recent efforts by the monarch to encourage closer ties with the rest of the African continent. "Africa is my home, and I am coming back home," King Mohammed VI said in 2017 as Morocco was re-admitted to the Africa Union after a 30-year absence in a row over the disputed territory of Western Sahara. This rapprochement has allowed business links to flourish, especially with West Africa.

But Morocco is also a member of the Arab League - so officially belongs to both cultural spheres.

While the adjective "African" to describe Morocco is a geographical fact, the use of "Arab" has also alienated many Moroccans who do not identify as such.

Morocco has a substantial population of Berbers, or Amazigh as they prefer to be called - some estimates put it at nearly 40% of the country's population of more than 34 million. One major Amazigh language - Tamazight - is now recognised as an official language alongside Arabic.

But this was a controversy long time in the making. Immediately after Qatar was awarded the right to host the 2022 World Cup, its media framed the event as a "Victory for Islam and pan-Arabism", as a headline put it back in 2010.

As the tournament got under way, the vocabulary of pan-Arabism and Islamism crept back to the front. In the conflict over the ban on alcohol or the use of the OneLove armband of the LGBTQ, advocates of Islamism and pan-Arabism came to the defence of Qatar, Islam and traditional values against "the imperialist West". 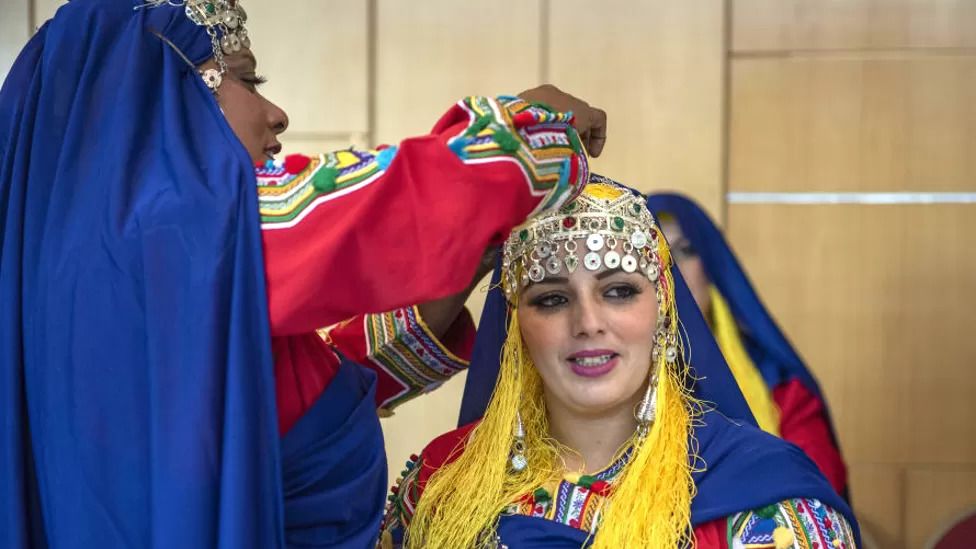 The Amazigh are the indigenous people of North Africa

But the initial framing of the event by the Qatari media as an "Islamic or Arab Conquest", which had gone largely unnoticed, provoked an angry reaction when it became part of the language of running commentary on the games.

So, when the Atlas Lions made history by becoming the first men's team from Africa and the Middle East to qualify for the World Cup semi-final, it was hailed as a victory for the Muslim and Arab nations.

After other teams from the region - Tunisia, Saudi Arabia and Qatar - were disqualified early in the race, it was only natural that football lovers in neighbouring countries would rally behind Morocco.

But some vocal groups sought to portray the Moroccan success as something much larger, more ideological and political. Consequently, the Moroccan team was assigned the role of the standard-bearer of Islam and pan-Arabism.

This argument was strengthened when some of the Moroccan team's players celebrated their successes by unfurling a Palestinian flag on the pitch.

This kind of rhetoric outraged many in North Africa, but particularly among Moroccans who do not subscribe to these ideologies and their worldviews.

In an hour-long tirade, one dissident Moroccan YouTuber blasted those who sought to politicise the game and turn it into a global culture war.

Brother Rachid also reminded his 385,000 subscribers that half of the Moroccan team, including their coach, were in fact born and bred in Europe, the children of Moroccan migrants who learned the game and became professional footballers in Europe.

"If you were to do a DNA analysis of the Moroccan team, you would find that most of them are Amazigh. Most of them don't speak Arabic. And if they did it will be 'broken Arabic' because they grew up in the West," he said.

The role of Islam and freedom of speech are sensitive in Morocco, where the royal dynasty regards itself as the Prophet Muhammad's descendants, and the king retains the title of The Commander of the Faithful - an historic term for early Muslim rulers. Yet the YouTuber was not afraid to tackle thorny issues:

"Morocco is different from the Middle East, because it is fundamentally a Berber society, the Arabs came as outsiders in the 7th Century. Today in Morocco there are Arabs, Berbers, Muslims, Jews, atheists, non-religionists and Baha'is, there are Shias and Sunnis."

Considering this Moroccan success "a victory for Arabism and Islam is an attack on the various components of the Moroccan society", he went on to say.

In response to the pan-Arabists or Islamists seeking to hijack the Moroccan triumph for their own use, posts on social media proliferated to claim back the team as Morocco's. Some posted pictures of the team emblazoned with Amazigh symbols. 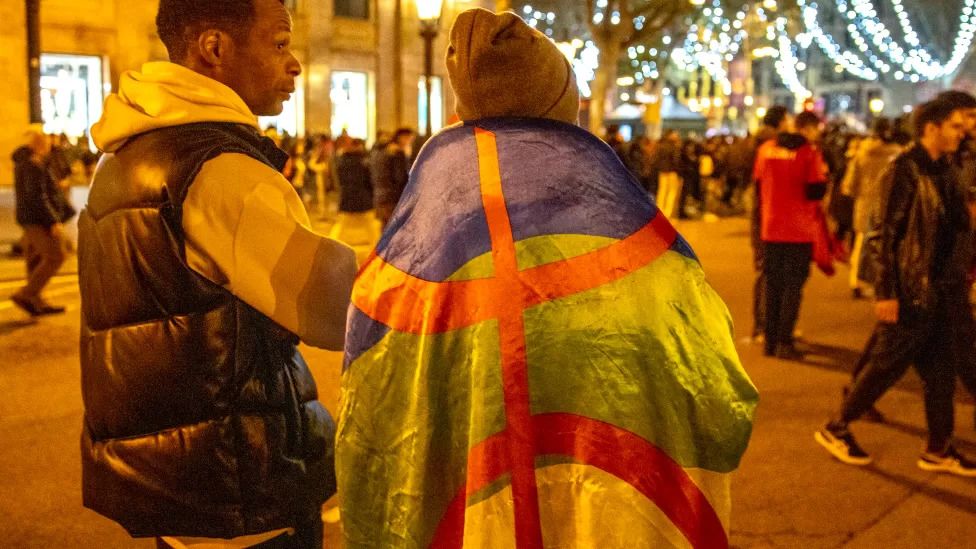 Some Moroccan fans draped themselves in the Amazigh flag

Other critics highlighted the absurdity of turning a game of football into a religious or ethnic war, arguing that it is inconceivable that a win by France, Brazil or Argentina could be considered a triumph of Christianity.

They pointed out that would be impossible, given the ethnic and religious mix of some of the national football teams in Europe for example.

The controversy over the true identity of the Moroccan team is the latest manifestation of a "culture war" that has raged for decades across North Africa and the Middle East.

National identity has been central to the two ideologies - Islamism and pan-Arabism - that shaped political discourse in the region for decades.

While they made sense during the struggle for national liberation, prioritising social cohesion over individual freedom, they seem to have outlived their usefulness and become irrelevant in an increasingly globalised world - as the row over a football match clearly demonstrates.