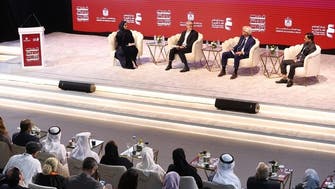 Academics, orientalists affirm the place of Arabic in world literature

Academics and orientalists discussed the status of the Arabic language and its importance in world literature, pointing out that many European schools were influenced by the Arab literary heritage, and borrowed many elements from it. This contributed to opening the way for non-Arabic speakers to learn about the treasures of Arabic literature and creativity.
This came during a dialogue session entitled ‘The Arabic Language in New Worlds’, held during the Arabic Language Summit organized by the Ministry of Culture and Youth in cooperation with the Abu Dhabi Arabic Language Centre of the Department of Culture Abu Dhabi on Tuesday. The session shed light on the aesthetics of the Arabic language, its presence among other peoples and civilizations, and its status from the point of view of other cultures. Moderated by Dr. Maryam Al Hashemi, a researcher and academic from the UAE, the panel featured Marcel Kurpershoek, a specialist in Nabati poetry; Maurice Pomerantz, Head of the Literature and Creative Writing Program at NYU Abu Dhabi; and Dr. Kashif Jamal, Professor at the Centre for Arab and African Studies at Jawaharlal Nehru University, New Delhi, India.

In his speech, Dr. Marcel Kurpershoek, who is passionate about Nabati poetry, spoke about his experience and love of poetry that stems from his love for the region and its culture. He pointed out that Nabati poetry is a distinctive form of classical poetry, with its specificity, aesthetics and uniqueness that distinguishes it from other literary and creative arts.

Kurpershoek talked about the duality of use of both colloquial and classical language, the dialectical relationship between them, and the areas of employment of each, he said: “Language is a playground in which the strong and the weak stand together. Dealing with the language is based on its uses, whether in the field of literature, irony, humor, or criticism.”

On the need to pay attention to the mother tongue and its use in daily communication in light of the diversity of dialects, Kurpershoek pointed out that the use of the classical language for him formed the basis of understanding the local dialects, which piqued his interest in Nabati poetry, which requires a deep knowledge of dialects.

For his part, Maurice Pomerantz pointed out the influence of the Arab literature on world literature and how Andalusian poetry and ‘maqamat’ influenced French poetry, and the poetry of love and romance, he said: “From the influence of these literary schools on Arabic poetry and literature, you almost feel that if some French poems in that era were translated into Arabic, I would feel that they were written mainly in Arabic.”

Pomerantz continued: “The maqamat of Badiuzzaman Al-Hamathani had an impact on the Western novel concept in Spain, just as Arabic literature such as the stories of 'One Thousand and One Nights' influenced Western stories. I wonder why we measure the value of the Arabic language by the extent of its impact on Western literature? Arabic is a language of world literature, and there is evidence that written copies of maqamat are sold in Beijing in the seventeenth century. At the same time there are existing manuscripts of maqamat copied in West Africa in Arabic, as well as a Russian orientalist discovered passages of maqamat that had travelled from West Africa to Brazil in the nineteenth century.”

For his part, Jamal Kashif pointed out that he chose Emirati literature to be the main material for his doctoral thesis, which focused on existential thought in the novels of Ali Abu Al-Rish, stressing that this research constituted a platform to know the challenges faced by the Arabic language closely.

Kashif said: “It was an experience with Arabic language, which allowed me to know Emirati literature and experience its aesthetics and nuances. The Arabic language and literature are flourishing in the UAE due to the pioneering literary and cultural activities and initiatives that the country has been promoting. These are followed with great interest by intellectuals in India, and we are proud to be part of these activities.”

On the difficulties of researching the Arabic language, Kashif spoke about several problems in the use of dialects and colloquial language instead of classical language, describing it as speaking for many who learn the classical form and but find it difficult to communicate and understand it.

Kashif said: “The other problem I faced in writing the research is that there are very few Arabic books in India, so I must travel to the region to find sources that help complete research on the Arabic language. This is in light of the intellectual and cultural renaissance witnessed by the UAE and Arab and Gulf countries alike.”